Extreme Engineering: A Tunnel Through The Alps 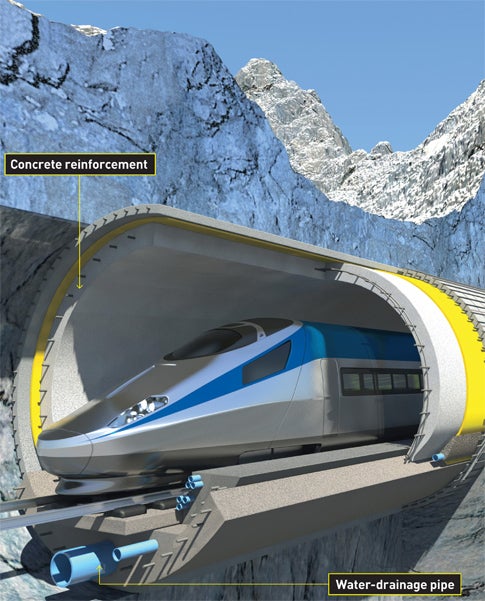 7,546 feet: Most amount of rock above tunnel 26.5 million tons: Volume of excavated rock 95 miles: Total length of all tunnels and shafts 2,000: People working on the tunnel, 24 hours a day, 365 days a year 2.5 million liters: Water used per day 5 megawatts: Power required to operate one of the four tunnel-boring machines. Nick Kaloterakis
SHARE

Name: Gotthard Base Tunnel
Where: Swiss Alps
Cost: $8 billion
Estimated Completion: 2017
The challenge: Dig the longest tunnel ever, perfectly level, through the base of the Alps

On opposite sides of an Alpine mountain range, engineers manning huge, rock-chewing machines are slowly inching toward each other. They’ve been at it for 13 years, some days burrowing through 82 feet, others less than 40 inches. But they’re about to see the light in the middle of the tunnel. In early 2011, the northbound excavating team will make the final breakthrough, opening up a straight 35-mile shot that will shave 25 miles—or a full hour—off the trip from Zurich to Milan.

Switzerland’s AlpTransit designed the new tunnel to replace the existing Gotthard, which winds up, down and around the Alps; its steep inclines and curves severely limit train speed and cargo capacity. The new, almost perfectly flat pass will allow high-speed passenger trains and heavy freight trains with twice the cargo to race through at up to 155 mph.

Digging the shortcut means sticking close to the base of the mountain. The route crosses brittle fault lines and spans a layer cake of hard granite, soft shale and quartz. The most challenging area is a 5.3-mile leg in the middle called the Sedrun, which contains an unstable, high-pressure sandwich of hard and soft rock. Traditionally, diggers spray concrete on the walls of a newly bored tunnel to keep it from closing in on itself. But the soft rock here can deform under the weight of the mountain above it and close the hole by as much as 30 inches. So the team is anchoring deep into the tunnel walls pairs of interlocking steel rings connected by sliding joints. This experimental technique lets the mountain settle in a controlled way before engineers add the concrete.

Heinz Ehrbar, Gotthard’s chief construction officer, expects that the worst is behind them but, he says, “We always have surprises, even in good rock.”