Inside the construction of the Shanghai Tower. 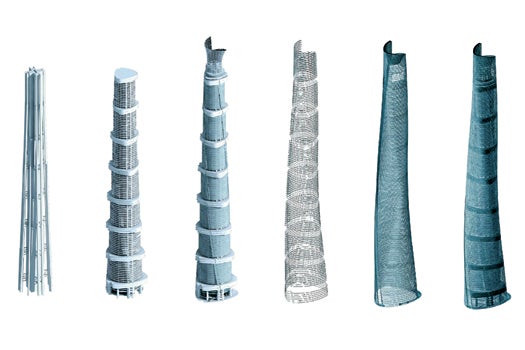 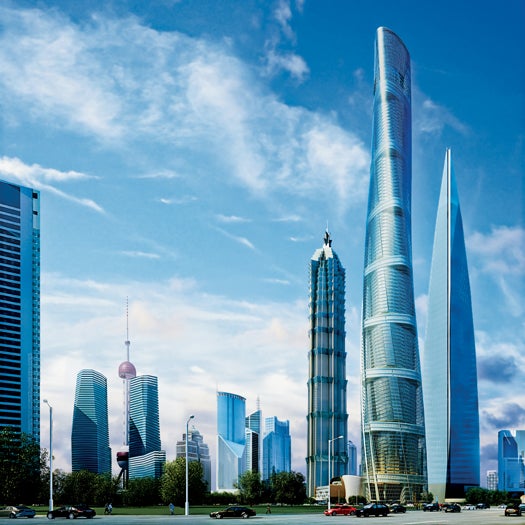 When it opens in 2014, the Shanghai Tower won’t just be the world’s second-tallest building. The 2,073-foot-high skyscraper, designed by the architecture firm Gensler, will be a showcase of 21st-century engineering, introducing the innovations that could become standard in the next generation of supertall towers.

The building relies on three interlocking systems to remain upright. The first is a 90-by-90-foot concrete-and-steel core, which provides vertical strength. A ring of steel “super-columns” [above, left] surround the core, connected to it by steel outriggers. The columns buttress the building against lateral forces. Every 14 floors, two-story belt trusses hug the building’s perimeter; each marks the start of a new zone. “The structure works like a wedding cake in nine sections,” says Dennis C.K. Poon, an engineer with the firm Thornton Tomasetti, which worked on the building.

Like most modern supertall skyscrapers, the Shanghai Tower will house more than just offices. “A tower this big can have its own zip code,” says Benedict Tranel, technical director for Gensler. Each of the nine zones will have its own sky lobby and atrium tucked between the inner and outer glass walls. The first zone will be retail, zones two through six will be office space, and zones seven through nine will contain a hotel and an observation deck. Each sky-lobby floor will have its own retail shops and restaurants, making it a sort of vertical neighborhood. 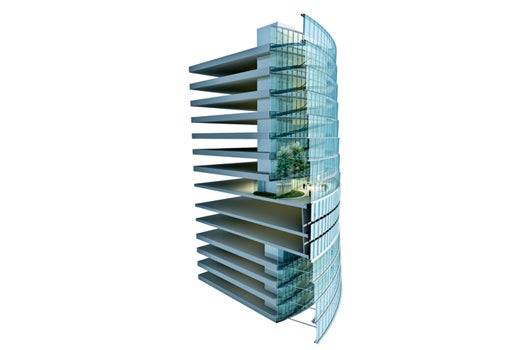 The tower has two glass facades, one inside the other— essentially, a tube within a tube. The space between them, which ranges from 3 to 33 feet, provides room for light-filled sky lobbies, but it also acts as a Thermos-like insulator, so the building needs less active heating and cooling. Reduced energy use in a supertall is good for the environment and makes the building economically viable. Gensler estimates that its energy-efficient innovations will save
$2.5 million a year.

Designed by Mitsubishi, the tower’s express elevators, which will shoot passengers up to the sky lobbies, will feature pressurized cabins and converters that regenerate electricity, reducing energy use by 30 percent. They’ll be the world’s fastest, with a top speed of more than 40 miles per hour—twice as fast as usual. Seven of the 106 elevators will be double-deckers. 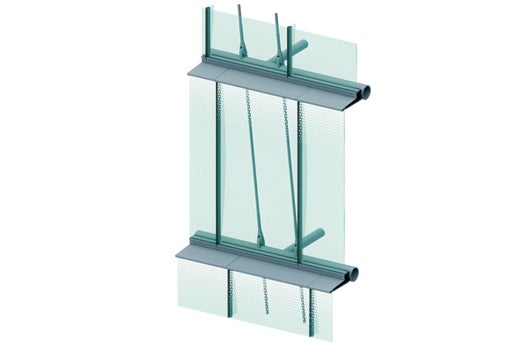 “Not every supertall tower requires deep foundations,” says Leonard Joseph of
Thornton Tomasetti. “But shallow, strong bedrock like that found in Manhattan is the exception, not the rule, in cities around the world.” Shanghai is in an earthquake zone, and the site (which is located on a river delta) has soft, clay-heavy soil. So before lifting a single steel beam, engineers drove 980 foundation piles into the ground as deep as 282 feet. Then they poured 2.15 million cubic feet of reinforced concrete to create an 20-foot-thick foundation mat.

The tower, which from above looks like a guitar pick, twists approximately one degree per floor as it rises. The twirling design slows wind currents as they circle the building, disrupting the vortex shedding that can cause a skyscraper to shake violently in the wind (the same way a blade of grass vibrates when you hold it between your fingers and blow). Wind-tunnel tests on scale models predict that the twisting shape will reduce the lateral forces by 24 percent—and that will be critical when the next typhoon hits Shanghai.

Read more about the tallest buildings on earth in “The Rise of the Supertalls.”