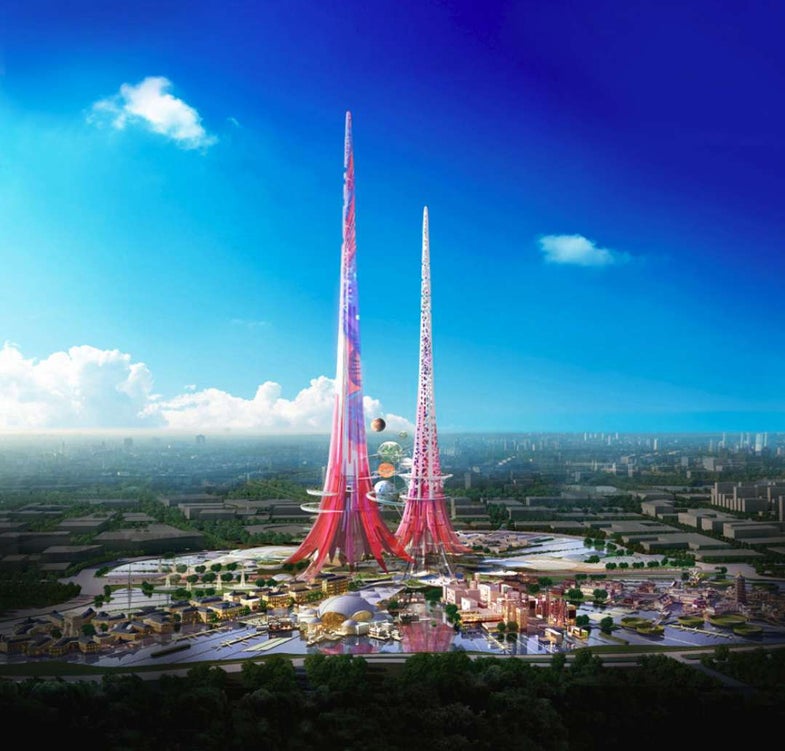 The eternal competition to build the world’s tallest building has yielded striking landmarks and spectacular rivalries, both of which have escalated in the past century. With its building boom that started in the 1980s, China may have been a late entry, but it’s a force to be reckoned given its penchant for drama and its tenacity. But its most recent entry, announced last week, has the potential to blow all the others out of the water: the paired Phoenix towers will be built on an island and combine every sort of green technology, both feasible and far-fetched. Plus, they’ll be bright pink.

The Phoenix Towers will be built in China’s 10th-biggest city, Wuhan, which is located in the center of the country. The city is split between the banks of the Yangtze River and riddled with lakes. Given its proximity to moving water, it’s only natural that the towers be built with renewable energy in mind. The taller, “male” tower, named Feng, will loom one kilometer high, its sides equipped with photovoltaic panels and a wind turbine couched in its tapering spire. Its sister tower, Huang, will have walls filled with plants (“green walls“), house insect hotels, and be equipped with biomass boilers, which heat the structures by burning plant fuel. At its base, the towers will collect rainwater.

If some of these green technologies seem mysterious to you, you’re not alone; some reviews have called the structures an “environmental novelty act” and “a greenwashed dick-measuring contest.” The green technologies predictable at best (wind turbine), over-ambitious (the biggest biomass boilers ever designed) and downright enigmatic (what is a “thermal chimney”?) at worst.

But according to Laurie Chetwood, the founder of British architecture firm Chetwoods Architects that partnered with a Chinese group on the projec, this over-the-top design was no accident. She told design magazine Dezeen, “In China if you come up with a slightly mad idea, its almost not mad enough…We’ve applied as many environmental ideas as we possibly could to justify the shape and the size of [the towers].”

The kicker in this excess is that the steel and lattice that give the towers their structure will be a bright, vibrant fuchsia to mirror the spectacular sunsets famous in the region, the architects say. And the name, Phoenix, comes from the Chinese phoenix of legend, Fenghuang, which is often represented by both male and female entities.

In fact, much of the towers’ significance is more symbolic rather than, well, useful. The Feng (“male”) tower can only be inhabited for about 100 floors, or about half of its height; the rest of the space in that and the other tower is devoted to mechanical and eco-friendly functions. Those involved in the project have indicated that their primary goal is to create a spectacular tourist attraction, reminiscent of the Eiffel Tower in utility.”This is a big tourist idea right in one of the largest lakes in Wuhan,” Chetwood said. “[The group that commissed the project is] turned on to the environmental idea but there’s always obviously the commercial element at the base of it.”

Some commentators fear that the towers will end up like some of China’s other ambitious construction projects: deserted and eerie, a misguided effort in eco-friendliness. But the plan is to build them in the middle of a huge city, so they won’t be isolated at least. Construction is slated to begin later this year, and surely the most interesting challenges are yet to come. 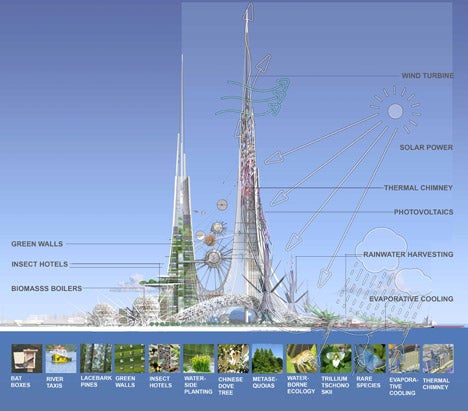 Schematic of the green technology