This portable crane can hoist millions of pounds all day long, then drive home like any other 18-wheeler 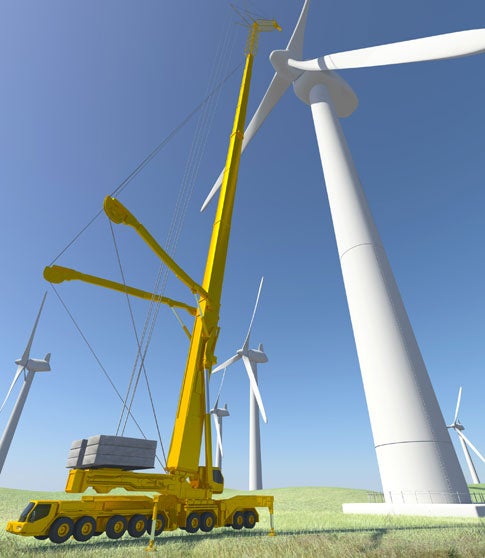 Built for tasks like lifting 55-ton generators to the top of 300-foot windmills, the Liebherr 11200-9.1 might just be the world’s most monstrous truck. The 108-ton 18-wheeler doubles in weight when the boom—-which with extensions can reach 47 stories—-is attached. Fully assembled, it can lift up to 2.6 million pounds. Without the boom, it can drive on public roads, so getting it to a job site requires five fewer trucks than it would take to haul in and assemble an equally large fixed crane. It’s also far easier to move from place to place once it’s on-site. These custom cranes don’t come cheap and take eight months to manufacture; Liebherr wouldn’t quote a price, but industry estimates range from $5 million to $10 million–which probably explains why there are only 10 of them in the world.

Boom
The telescoping hydraulic boom-—made from high-tension steel five times as strong as construction girders—-can stretch 300 feet into the air (550 with extensions). Up to 4,500 feet of steel cables tie the whole system together.

Guying System
This Y-shaped mast provides stability, preventing the boom from bending in either direction as it shoulders the load. This also distributes the load and increases overall lifting power.

Monster Truck
To get around, the crane rolls on 18 tubeless, high-pressure tires, each one 4.5 feet wide. An eight-cylinder, 16.2-liter diesel motor puts out 680 horsepower, allowing it to drive on normal roads (sans boom) at up to 47 mph. 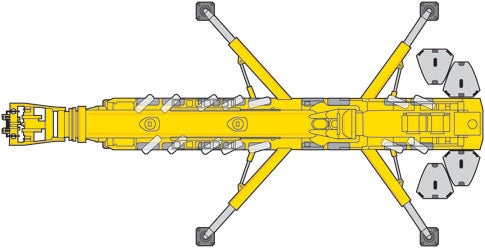 Outrigging
An X-shaped array of hydraulic beams extend away from the vehicle, plant their feet firmly, and lift the truck off the ground, forming what’s called a torsion frame. This distributes the weight evenly among the beams and prevents the crane from twisting under its enormous load.

Counterweights
A crane is all about balance, and balance means counterweighting. The crane body itself is a hefty counterweight; without the boom, the 11200 weighs 108 tons (that doubles when the boom is in place). But the crane also holds up to 445,000 pounds of counterweights—giant, 5- to 20-ton steel plates filled with scrap metal and concrete that are stacked on the truck’s back.

Steel Cables
These support the boom and direct the force down to the counterweights on the truck body.

Lattice Jib
This short, stiff extension contains a pulley that changes the direction of the rope. The jib is set at a slight angle. This gives the operator more maneuverability while keeping heavy loads (like a windmill generator) close to the boom’s tip, sending the weight down the boom and into the truck body, counterweights and outriggers.