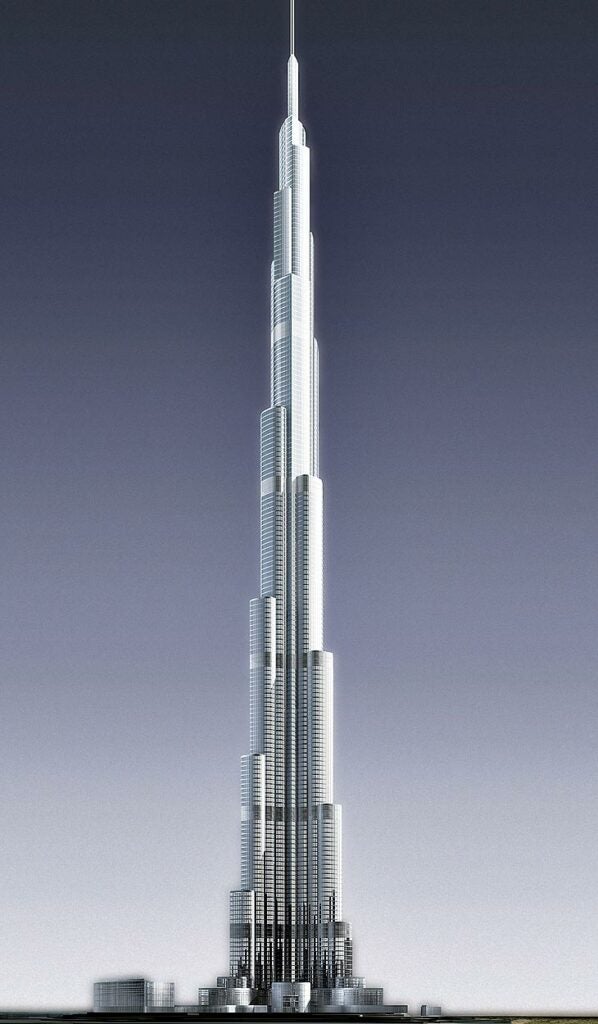 What: The world’s tallest building

What good are islands in the shape of palm trees and maps of the world if you can’t see their outline from high above? Dubai so yearns for tallest-building bragging rights that the Burj Dubai’s developers are attempting to thwart any potential competitors by keeping secret its exact height and number of stories (as well as a precise estimate of its price). Suffice it to say, the Burj will be “comfortably higher than anything out there or on the drawing boards,” says William F. Baker, a partner at Skidmore, Owings & Merrill and the Burj’s lead structural engineer.

Early designs placed the massive residential and hotel tower well above 2,000 feet. At that height, “vortex shedding”–eddies of wind, like the wake behind a boat–develops at a building’s top stories. As air whips around the tower at speeds reaching 120 mph, low-
pressure zones occur on one side, then the other, setting up vibrations, known as resonant frequencies, that can literally shake the structure to death–which is what happened to Washington State’s infamous Tacoma Narrows bridge in 1940, when high winds snapped a cable and sent the third longest suspension bridge in the world crashing into Puget Sound. Older skyscrapers like the Empire State Building are immune because they are built out of heavy steel. But to erect a tower more than twice as high requires a construction with even greater damping qualities. The Burj will be made of poured concrete that contains blast furnace slag and microsilicates–a material that’s almost as strong as cast iron, yet more resistant to damage due to vibrations because the natural cracking in concrete dissipates the energy.

The taller a building is, though, the more it flexes, increasing its likelihood of flexing to its breaking point. Abetted by extensive computer and wind-tunnel testing, SOM designed a building with numerous setbacks and wings to scatter the wind. “The wind sees 18 different sections,” says Baker, “each with a different vortex-shedding frequency. If we didn’t do that, the building would just fall down sideways.”

Keeping the building standing is only the first of a complex series of problems in a tower so high. The Burj’s relatively small footprint requires a single 11,000-voltage power line routed through a series of transformers throughout the building; Dubai’s burning sunlight necessitates coating the windows with special glazing; water pressure must be enhanced with a series of zoned pumping stations; and, to minimize commuting time, the elevators will zoom at 3,600 feet per minute. Going up, that is. “Coming down has to be a lot slower,” says Raymond J. Clark, SOM’s partner in charge of mechanical and electrical engineering, “or else you’d blow out people’s ears.”