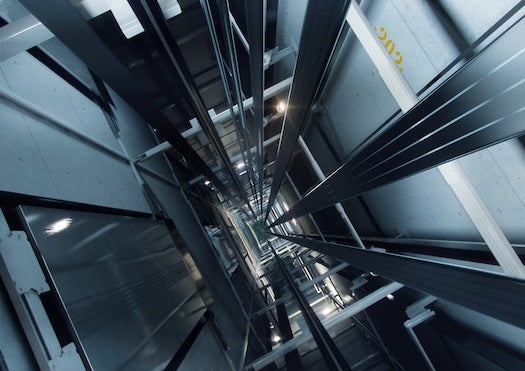 What’s one of the most important limits to the heights of skyscrapers? How far up an elevator can go.

The way elevators are currently made, they can only be about a half-kilometer tall, according to the Economist. Now, however, a company has announced that it’s developed an elevator cable, called UltraRope, that makes it possible to build a one-kilometer-tall elevator. The company, Kone of Finland, says it has tested UltraRope in real elevators and in a 333-meter-deep mineshaft it owns.

Of course, some buildings already deal with the limits of current elevators by having passengers switch to another elevator after a certain number of floors. But UltraRope means each of those intermediate elevators may be taller, making skyscrapers much taller overall.

UltraRope replaces steel with carbon fiber, the Economist reported. The carbon fiber is both stronger and lighter than steel. Elevators with UltraRope should use less power because their cables are so much lighter, according to Kone.

UltraRope elevators may also be shut down less often than steel-cable elevators. Right now, extra-tall elevators may get shut down during high winds, when their skyscrapers sway—as they’re designed to—setting the elevators in motion, too. Carbon fiber doesn’t resonate at the same frequency as steel and other common building materials, however, so it should stay steadier even when the rest of the building is swaying, according to Kone.

Besides elevators, are there other limits to the heights of buildings? Sure there are. The Atlantic Cities covered some of the limitations to building an ultra-tall sturdy structure last year. Among them is the need for a very large base, which would be difficult to fill with tenants. Nobody wants to have the office located in what’s pretty much the center of the base of a mountain.