Why are scientists so obsessed with studying zombies? 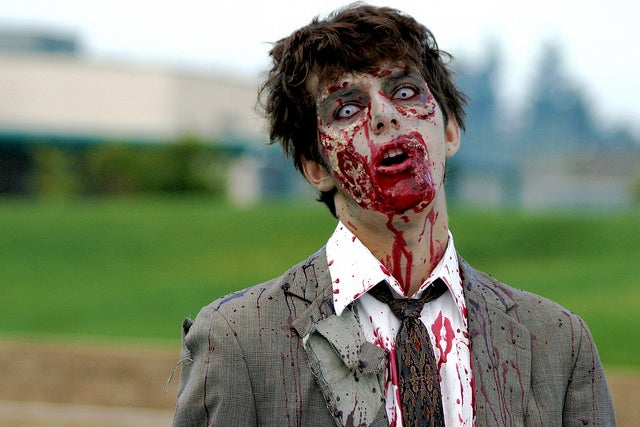 When the zombie apocalypse comes, it will be swift and brutal. Within 100 days of the dead rising to feast on our flesh, only 273 people will remain. Or so suggests a grim estimate from students at the University of Leicester, published recently in the school’s Journal of Physics Special Topics.

Okay, zombies aren’t actually going to destroy the human race (probably). But that doesn’t mean we can’t study them. The new calculations are by no means the first example of a formal scientific investigation into the living dead.

There’s plenty of research on “real-world” zombies, animals whose minds have been taken over by parasites. But some take this zombie-science obsession to another level. Zombies have been used to help us understand how infectious diseases spread, teach us about math or neuroscience, and improve our efforts to prepare for real crises.

When using math to predict how an outbreak will play out, zombie survivalists must ponder questions like: how many people can a zombie attack in a day? How likely is it that those victims will be infected? How quickly can the zombies be killed? How will our population’s rate of zombification change as people become more skilled at killing or evading the undead? What happens if we find a cure?

Epidemiologists ask pretty similar questions when modeling real-world diseases. “All these things that you can play around with that are just as applicable to an influenza outbreak or a mumps outbreak—like we’re seeing in Arkansas right now—as they are to a zombie outbreak,” says Tara C. Smith, an epidemiologist at Kent State University in Ohio (and member of the Zombie Research Society).

So zombies can illustrate how a hypothetical illness might spread under different conditions. “It’s difficult sometimes to model diseases that we know,” Smith says. “We have all these parameters we have to fill in, and we think we know a lot about each of them, and sometimes we’re wrong.”

But with zombies, all bets are off. “You can have them spread only by bite, by mosquitoes, by air, you can have them have an incubation period of 30 seconds or five days,” Smith says. “You can make up everything, look at how that spreads, and look at how different prevention methods can play a role in mitigating the spread.”

A few scholars have done just that. In 2009, University of Ottawa mathematician Robert J. Smith? (yep, the question mark is part of his name) and his students showed that humans would have to strike back quickly and fiercely against the walking dead to avoid “the collapse of society as zombies overtake us all.” The class project grew into a chapter in a book about modeling infectious diseases.

Smith? went on to edit a book called Mathematical Modelling of Zombies. One chapter suggests that it’s better to buy time by running from a zombie horde than trying to slow it down. “Fleeing for your life should be the first action of any human wishing to survive,” the paper’s authors note.

Another tip: head for the Rockies. A team from Cornell University came up with a simulation for a zombie outbreak in the continental United States and worked out the best places to hide. The epidemic would quickly plow through cities, and most of us would become zombies in the first week. But four months later, remote parts of Montana and Nevada would still remain zombie-free.

“Zombies form a wonderful model system to illustrate modern epidemiological tools,” wrote the researchers, whose zombie model is a cousin of the SIR (susceptible, infected, and resistant) models used to understand many illnesses.

Their results were used to create an interactive map called Zombietown, USA, so you can start a zombie epidemic anywhere in America and watch it sweep the nation.

Epidemiologists and university students aren’t the only targets of zombie experts. Smith (yes, the one without the question mark) uses the undead to teach people of all ages about real sicknesses. “Most of the modern zombie tales, at least since 28 Days Later, really have focused on the zombie as a contagion, as an infectious disease,” Smith says. “So it’s a perfect way to talk about the spread of infection, how you control it, why you should vaccinate, and how you can prevent other real infections like influenza or measles.”

Zombies have also inspired brain research. Neuroscientists have considered how the zombie brain might deteriorate to cause symptoms like a shambling gait or ravenous hunger, and how some neurological diseases can resemble zombieism.

The Centers for Disease Control has even recruited zombies to teach the living about emergency preparedness. In 2011, the agency floated a blog post titled “Preparedness 101: Zombie Apocalypse.” It featured the CDC’s usual advice about having a plan in case disaster strikes, but added the thrilling context of surviving a zombie attack. “If you’re prepared for the zombie apocalypse, you’re also prepared for hurricanes and flooding,” CDC spokesperson Dave Daigle told Livescience.

The post was so popular that it crashed the blog’s servers nine minutes after the CDC tweeted it. But do zombies actually make good teachers? Researchers at Loyola University Chicago tried to find out. They showed people both the zombie post and more straightforward advice. The zombie group was more entertained, but not actually more likely to remember what they’d learned or put it into action.

This doesn’t mean there’s no place for zombies in public health. The undead popped up through the entire CDC blog post; it might have worked better if there were a clearer line between the funny business and serious tips, the researchers decided.

Zombie hijinks can also be mixed with more sobering advice. In 2015, Smith wrote about the history of zombie outbreaks in the British Medical Journal’s annual Christmas issue, which chronicles playful ideas tackled with scientific rigor. The cases she described, like those in 28 Days Later and The Walking Dead, were fictional, but her call for better funding and cooperation among the international community applies to real-world epidemics too.

“In 2014 we had this huge Ebola outbreak in West Africa. We’ve known about Ebola since 1976, but we were still completely unprepared,” she says (fortunately, the global response to this epidemic was not like that in the fictional World War Z).

“Even these pathogens that we’ve known about for many years, they can still surprise us. And we still don’t have any good way to respond globally very quickly, very nimbly, and to stop these pandemics before they happen,” Smith says. “We’re always one step behind each pathogen.”