To be a good astronaut, you have to be a great gardener. 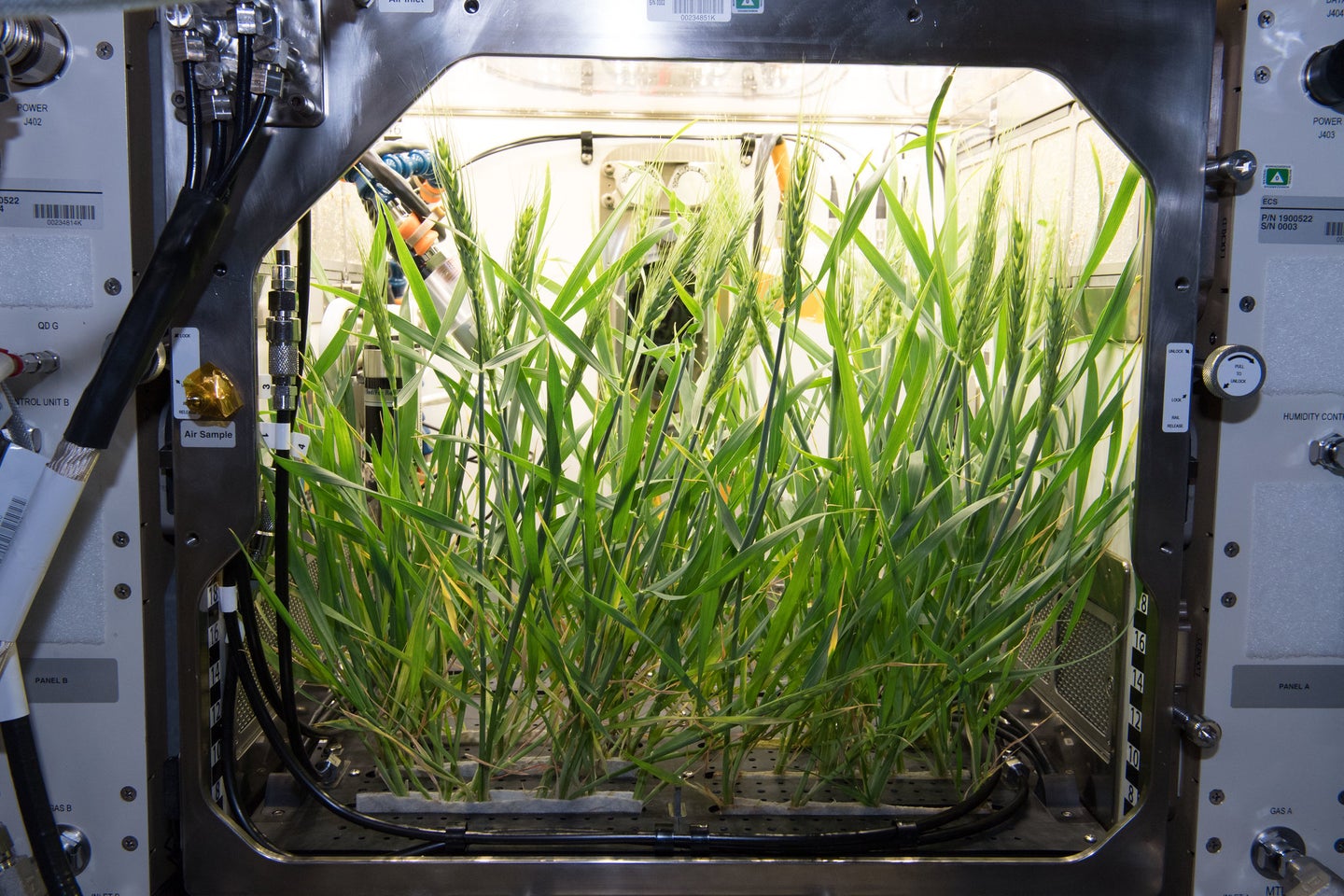 Growing a garden in space isn’t easy—but for astronauts, having a green thumb isn’t just a talent, it’s nearly a requirement.

Plants have had a short but lively history of being grown on the International Space Station. As astronauts move towards long-term independence from Earth, it’s even more imperative that they be able to meet their own nutritional needs in orbit.

“The small-scale projects performed on the space station today focus on conducting primary research associated with crop growth and performance,” says NASA in an emailed statement. “They serve as a stepping stone to the development of fully functional operational crop production systems that will accompany astronauts in the future.”

Current efforts at large-scale space crop production, however, face expensive and logistical challenges and technological gaps. A new paper, published Friday in Frontiers in Astronomy and Space Sciences, champions the need for new advances in automation, robotics, and even machine learning to get around some of these barriers.

Because pre-packaged food degrades over time, and any resources from Earth to potential lunar or Martian settlements may take too long to be delivered, it’s more feasible to invest resources into keeping flight crews healthy in real-time.

“It’s just so expensive and so hard to constantly provide food and oxygen and all the things that you need to keep people alive,” Simon Gilroy, professor of botany at the University of Wisconsin-Madison who was not involved with the research. Space is a “weird” place for biology to exist in, says Gilroy, and that’s one of the reasons it’s a great opportunity to study plants and humans’ evolutionary record.

But in some measure, NASA’s deep interest in astrobotany, or the study of how plants interact with a space environment, also stems from lessons gleaned from piratical history. Centuries ago, when adventurous explorers journeyed long distances across the sea many would die from scurvy, or a severe lack of vitamin C.

This crucial vitamin, which can be naturally found in oranges, is a key nutrient in staying healthy. And, though modern purveyors of the universe could take their daily vitamins instead of going through all the trouble to grow their hard-won lettuce, plants provide powerful psychological as well as nutritious benefits.

The Frontiers article also states that by using a technique called hyperspectral imaging—a method that can capture and process a large amount of information from across the electromagnetic spectrum (not just red, green, and blue light)—scientists could develop a precise plant health monitoring system. This system would collect data to help ensure food safety by autonomously monitoring plant health, as well as alerting astronauts to early plant diseases, drought, or microbial infections.

A prototype of this system is already in development at the Kennedy Space Center, where it is also being used to create a database of plant images astronauts can refer to when determining plant stressors.

[Related: Watering space plants is hard, but NASA has a plan]

NASA hopes that in the future, these and similar systems will be used to help train AI algorithms that can be used on the ISS, and Gateway, an outpost that will orbit the moon as part of NASA’s Artemis space program. But according to the agency, “more work needs to be done before we can be confident that the crews we send to Mars will have a healthy and fully functional food system to accompany them on their journey.”

Along with the United States Department of Agriculture (USDA), NASA is also currently investigating the use of microgreens—small, nutrient-dense plants that can be easily grown and eaten without the need for extended crew involvement. Numerous space crop research projects are also underway, including the Vegetable Production System (Veggie), a garden on the ISS that astronauts use to study microgravity’s effect on plants.

Another, the Advanced Plant Habitat (APH), is a fully automated growth chamber used to harvest and conduct real-time research on plant crops. Because of these and similar projects, NASA has become a pioneer in space crop research and solutions.

One latest example is Ohalo III, a prototype crop production rig in production at the Kennedy Space Center. This rig will serve as a test platform for new plant growth technologies, and test advanced concepts for water delivery. The rig will also let astronauts pick and eat a variety of “salad-type crops,” which scientists hope will reduce “menu fatigue.”

The Ohalo III project, which began in 2019, will eventually be deployed on the Mars Transit Vehicle, where it will help guide early lunar and Mars surface production systems.

That said, humans are still years away from seeing large-scale space crops become a reality, Gilroy says. But the next few decades’ worth of space crop projects are about laying the groundwork for future generations to thrive.

“We’re still in that sort of discovery, tinkering phase, where we’re making progress towards finding the solutions,” says Gilroy. “We’re like the explorers who’ve just stepped on to their boats and are just sailing across the oceans to find out what’s going on.”