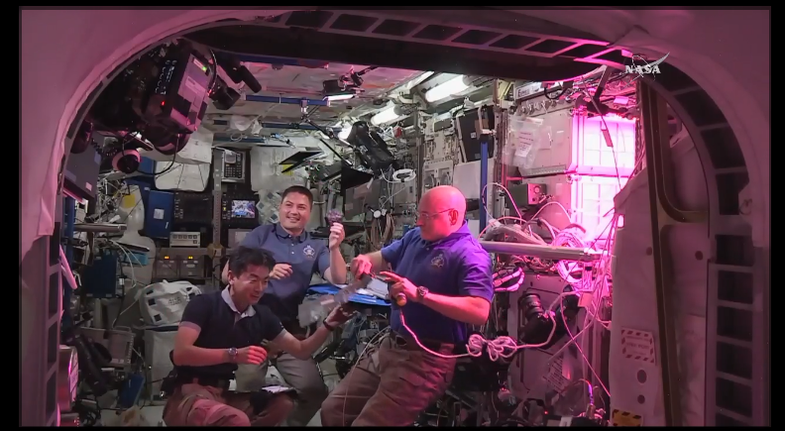 NASA has been growing lettuce on the space station since May 2014, and today, astronauts finally got to test the fruits of their labors. The space station’s first fresh veggies were grown in a microwave-sized box under LED lights. And it “tastes awesome,” according to astronaut Scott Kelly, after he and two other astronauts cheersed with the space lettuce.

The astronauts said the red romaine tasted “kind of like arugula” and “fresh”—which is saying a lot, considering the rest of their food is freeze-dried and prepackaged. For lunch, they sprinkled it with olive oil and Italian balsamic vinegar.

The first space salad took a long time to make. The astronauts’ tools kept floating around, and the harvesting had to be done scientifically, swabbing it with a Q-tip and then carefully cutting off just half of each plant, so that scientists on Earth can study the rest later. The ultimate goal is to figure out how to grow food on missions that take astronauts far from Earth.

“On the way to Mars and on the way back, you’re not going to be able to get resupplies,” said Kelley. “We’re going to need to be completely self-sufficient. This is a big step in that direction.”

During a Q&A following the first taste-test on Facebook, NASA said the plants grown in space are not nutritionally different from their Earth-rooted counterparts. The space lettuce’s size and shape is about the same, too.

Later, NASA released a video of the lettuce harvest and tasting in 4K Ultra-HD, captured by the RED Epic Dragon digital camera currently aboard the station.

Coming up next, the astronauts are planning to grow tomatoes and cabbage. Yum!

This post was updated to include info from NASA’s Q&A on Facebook and the new 4K video.