A Maryland school district switched to electric buses to save kids’ lungs. Can others follow?

Dirty diesel buses could be booted if budget pains are overcome. 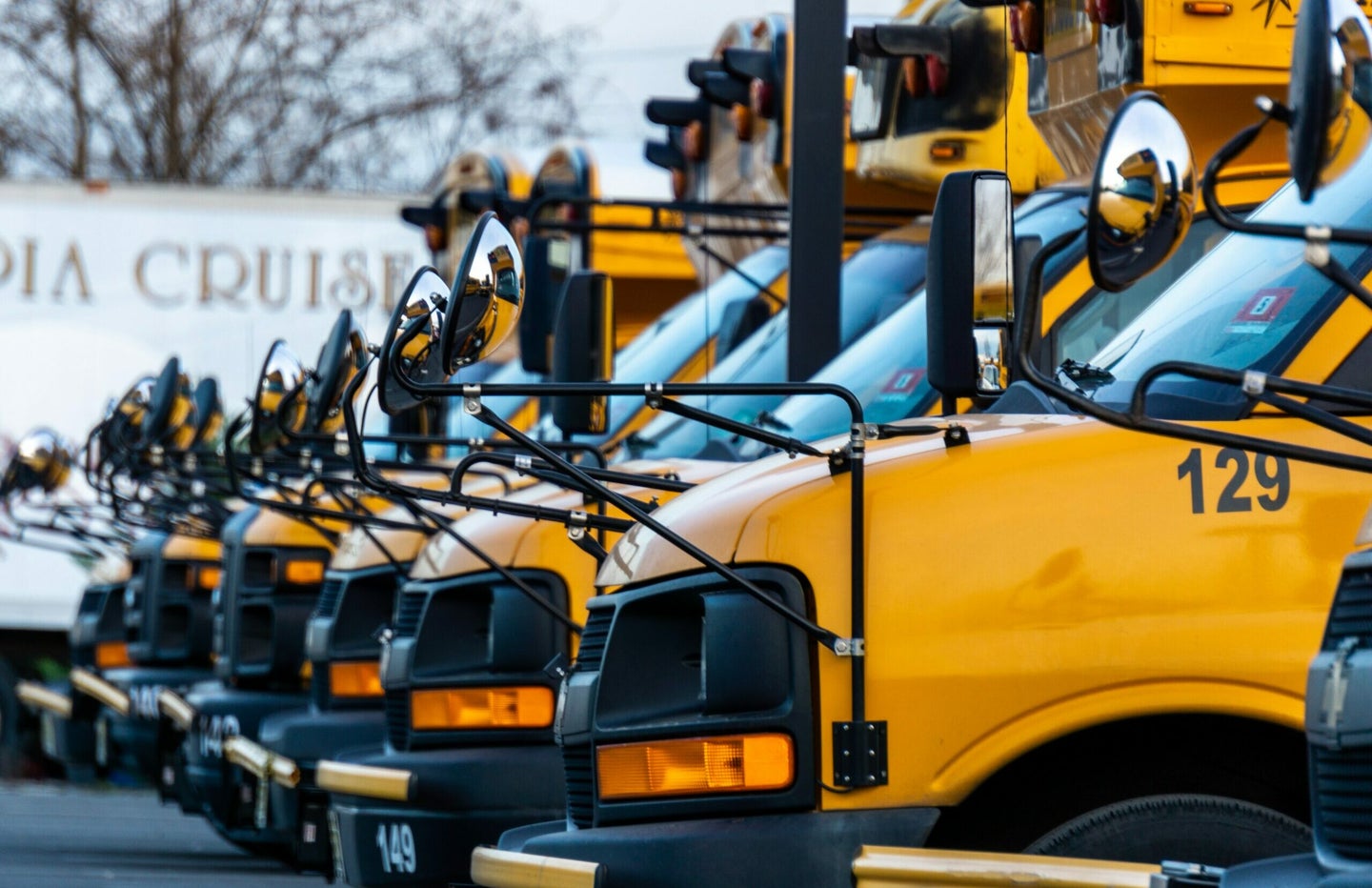 School buses are the nation's largest fleet of vehicles, and most of them are dirty diesel polluters. Harrison Kugler
SHARE

As the Director of Transportation of Montgomery Public Schools in Maryland, Watkins made waves with his decision to replace his district’s diesel school bus fleet with cleaner, electric models. Unbeknownst to him, the deal he struck up in February with Highland Electric Transportation to lease 326 buses over four years, and eventually replace the entire 1,422 bus fleet, turned out to be the single largest purchase of electric school buses in the US.

“It’s been from the entire school bus industry, from the electric vehicle industry, from the environmental industry—I mean, everybody has just been pleasantly overwhelmed by this decision, and that certainly wasn’t my intent,” Watkins says. “I had no idea what kind of ripple this would make through all of those worlds.”

After being surprised to hear major school bus industry leaders predict a complete shift toward electric at a conference five years ago, and feeling pressure from students and environmental groups, Watkins and his team put out a call to find a budget-neutral way to replace diesel buses in his district’s fleet. Highland Electric offered everything he was looking for: a system ready for immediate use, installation and maintenance of the charging infrastructure, payment for the electric, and dealing with the utility provider.

Watkins’ decision is at the forefront of a larger shift toward cleaner and healthier transportation for the nations’ children. Taking old diesel buses off the road can improve students’ health, cut greenhouse gas emissions, and be an ideal application of bidirectional electric vehicle technology. Up-front costs are the biggest barrier to entry for America’s notoriously budget-stretched schools, but the past and present work of activists and legislators may be bringing us closer to clean energy transportation for kids.

Around the country, more than 25 million children ride the bus to school each day, making the 480,000 buses the largest fleet of vehicles in the country—and only a few hundred or so school buses across the nation have made the switch to electric technology. Meanwhile, diesel emissions accounted for nearly a quarter of the US’s total transportation sector CO2 emissions and nearly 9 percent of total its energy-related CO2 emissions in 2019, according to the Energy Information Administration.

A large and growing body of literature shows that air pollution, from dirty diesel buses in particular, has negative outcomes for health and cognitive functioning—and kids in underserved communities are more likely to be impacted by this pollution. Children from low-income families may have no choice but to take the bus if their family does not own a car or their parents don’t have time to take them to school.

“[School buses] spew thousands of toxic chemicals into the air, and they aggravate the climate crisis in poor communities across the country,” says Athena Motavvef, Associate Legislative Representative at Earthjustice, a nonprofit public interest environmental law organization. “And every day thousands of childrens, especially Black and Brown children, breathe in these fumes.”

The health outcomes from exposure to pollution, like asthma and cardiovascular disease, are clear examples of environmental and health racism. In 2018, the US Department of Health and Human services found that Hispanic children are 40 percent more likely to die from asthma, as compared to non-Hispanic whites. Overall, 14.5 percent of Black children have asthma, compared to 7.7 percent of White children, according to the Centers for Disease Control and Prevention.

Meanwhile, a 2015 study showed that adopting clean fuels and technology on school buses reduced children’s exposure to harmful pollutants and improved health. A 2019 study looked specifically at students who moved to a school located downwind of a highway, which enabled the researchers to see whether new, higher exposure to pollution changed the students’ academic performance. They found that those exposed to more pollution experienced decreases in test scores, more behavioral incidents, and more absences compared to their performance at their old school. Another study from 2019 found that retrofits to diesel school buses improved both student health and scholastic performance.

“People are consistently finding that cleaner air is better for people in a lot of ways, in terms of their health, in terms of their cognitive function,” says Daniel Kreisman, a co-author on the diesel retrofits study and Associate Professor of Economics at Georgia State University who studies education finance and policy.

But while the research shows that moving toward cleaner rides to school can have huge health benefits, start-up costs for these pricier buses can be preventative, especially in districts where budgets are already stretched thin.

Watkins’ district managed to strike a budget-neutral deal due to a fixed-cost financial model, in which the district pays an average of about $43,000 per bus per year over the equipment’s 12-year lifespan rather than having to pay the total cost up front. Meanwhile, Highland Electric covers all other expenses, from electricity to maintenance, gaining the benefits of any government grants and lower fuel costs that come from electrification. Watkins is hoping to spread the word about this model to other interested schools or stakeholders.

“I really think Highland were the visionaries here,” Watkins says. “They figured out a way for people to start doing this, [by] taking out all of the fears and the reasons why not.”

Although cleaner buses have higher up-front costs than their diesel counterparts, school districts can save on operation and maintenance in the long-run. John Boesel, president and CEO of the clean energy transportation non-profit CALSTART, estimates these costs are cut at least in half for electric buses and potentially up to 75 percent, since cleaner tech does not require maintenance of filters or oil and transmission fluid changes.

Beyond lower maintenance costs, the attraction of electrification of any vehicle from an economic perspective comes from the fact that this technology is not beholden to the fluctuations of the oil market, so higher up-front costs can be made back by saving on fuel long-term. But, school buses by nature don’t typically accumulate that much mileage, so that trade-off doesn’t necessarily apply—unless bidirectional charging is used.

Bidirectional charging allows energy to be taken from a battery and pushed back to the electrical grid to help alleviate spikes in demand. Because school buses are often not used during the summer or during peak hours of the day (from about four to seven in the evening), selling electricity back to the grid can be lucrative, helping to pay off the higher up-front costs of the buses. “That flips the whole equation, because they are an ideal application for vehicle-to-grid, bidirectional charging,” says Daniel Sperling, founding director of the Institute of Transportation Studies at the University of California, Davis. He says converting school bus fleets to an electric, vehicle-to-grid system could pioneer a larger transition to bidirectional charging for any EV cars or fleets—potentially creating the infrastructure for this shift to make its way to people’s home garages.

Government support for this transition is another potential way to alleviate budget pains. On April 21, four senators and congress members introduced the Clean Commute for Kids Act, which would invest $25 billion in transitioning diesel school buses to zero-emission vehicles. Forty percent of this funding would go toward replacing school buses serving low income communities.

“I think [the biggest obstacle to widespread EV school bus use] is primarily overcoming that financial barrier, and that’s what is exciting about this federal policy is that they want to provide funding to really help address that,” Boesel says.

The legislation is being supported by a number of education and environmental policy groups. But the push for government support on this matter is not a new one.

Chispa, a Latinx branch of the League of Conservation Voters (LCV), has been fighting for EV school buses for years through their Clean Buses for Healthy Niños campaign. They’ve called on state governors to use funds from the Volkswagen Environmental Mitigation Trust, the result of a billions dollar settlement after the auto manufacturer cheated on federal emissions tests, and have used grassroots organizing to move their goals forward.

“Thinking of this generation of asthmatics that we are—that really fired up some of the moms that wanted clean and healthy air for their children to play outside and not feel like they have to cough up a storm,” says Pita Juarez, National Communications and Creative Strategies Director for Chispa, LCV. “So that created this beautiful movement of all these moms coming together, writing letters, testifying, creating digital media with us, telling their stories so that we can really showcase what this environmental racism looks like for communities of color.”

Juarez says it is exciting to see more people jump on board with clean bus technology, but she hopes to see federal action trickle down to a state-level, too. State incentives programs, like one in California that provides vouchers to cover costs beyond that of a diesel bus, are another good option to support this transition, according to Boesel.

Amidst the financial and technical complexities, Juarez says it is essential to keep pushing this movement forward to improve the lives of children across the country.

“It’s really important to focus on the humanity of it,” Juarez says. “People’s health and lives are being affected every single day because of this issue.”

Correction: This article has been updated to clarify that Pita Juarez is part of Chispa, LCV, not LCV as a whole.