This ghostly particle may be why dark matter keeps eluding us

Physicists in Russia think they’re on the trail of a new particle that's everywhere, but nowhere. 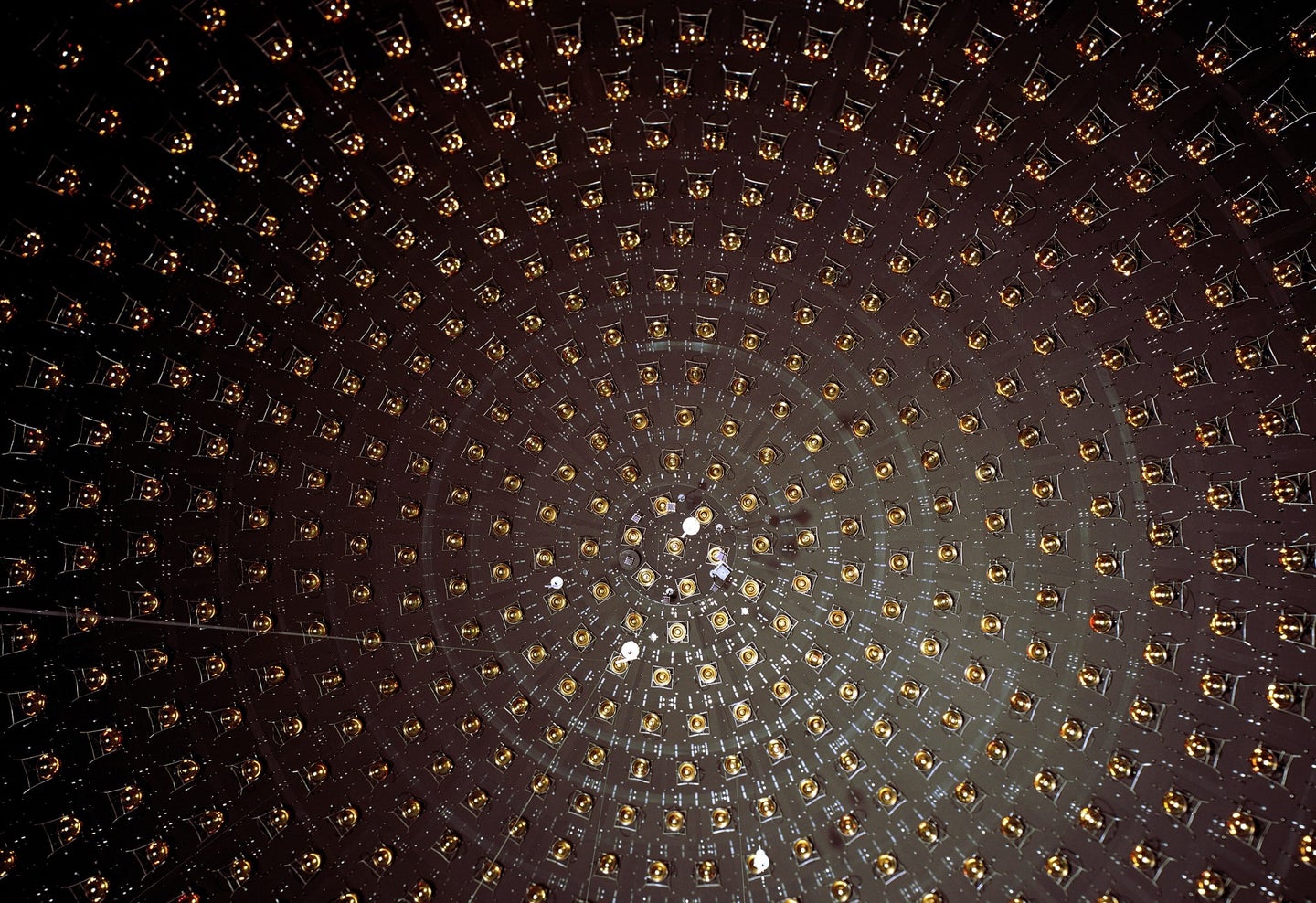 Different detectors can be built to measure and study different kinds of neutrinos. The MiniBooNE experiment at Fermilab, for example, is specifically used for muon neutrinos. Reidar Hahn/Fermilab
SHARE

Every second, 100 trillion phantasmic little particles called neutrinos pass through your body. Nearly all of them shoot through your skin without interacting at all. Their shyness makes these particles particularly painstaking for physicists to detect.

But over the past few decades, the world of neutrino physics has been taking on a new challenge.

From an experiment conducted deep under the Caucasus Mountains in Russia, physicists have found further evidence—published on June 9 in two papers—that a piece of the current theory of neutrinos is out of place. If they’re right, it could unveil a never-before-seen type of neutrino that could fly even more under the radar—and could explain why we can’t see the dark matter that makes up much of our universe.

“It’s probably, in my mind, one of the most important results in neutrino physics, at least in the last five years,” says Ben Jones, a neutrino physicist at the University of Texas at Arlington, who was not involved with the experiment.

The case of the misbehaving neutrinos

Like creatures from an ethereal plane, neutrinos react with their material surroundings sparingly. With zero electric charge, they aren’t susceptible to electromagnetism. Nor do they get involved in the strong nuclear interaction, which helps bind particles together in the hearts of atoms.

But neutrinos do play a part in the weak nuclear force, which—according to the Standard Model, the theoretical framework that forms the foundation of modern particle physics—is responsible for certain types of radioactivity.

The vast majority of neutrinos we observe on Earth are born from radioactive processes in the sun. To watch those, scientists rely on neutrino observatories under the sea or buried deep beneath the planet’s crust. It’s not often easy to tell if neutrino detectors are working properly, so physicists can calibrate their equipment by placing certain isotopes—like chromium-51, whose neutrino emissions they know well—nearby.

As neutrino physics gained momentum in the 1990s, however, researchers noticed something odd. In some experiments, when they calibrated their detectors, they began finding fewer neutrinos than accounted for in theoretical particle physics.

For instance, in 1997 at Los Alamos National Lab in New Mexico, scientists from the US and Russia set up a tank filled with gallium, a metal that’s liquid on a warm summer day. As neutrinos struck the gallium, the element’s atoms absorbed the particles. That process transformed gallium into a more solid metal, germanium—a sort of reversed radioactive decay. Physicists measured that germanium to trace how many neutrinos have passed through the tank.

But when the Los Alamos team tested their system with chromium-51, they found too much gallium—and too few neutrinos, in other words. This deficit became known as the “gallium anomaly.”

[Related: Why Los Alamos lab is working on the tricky task of creating new plutonium cores]

Since then, experts poring over the gallium anomaly have explored a tentative explanation. Particle physicists know that neutrinos come in three “flavors”: electron neutrinos, muon neutrinos, and tau neutrinos, each playing different roles in the dance of the quantum world. Under certain circumstances, it’s possible to observe neutrinos switching between flavors. Those shifts are called “neutrino oscillations.”

That led to an interesting possibility—that neutrinos were missing in the gallium anomaly because they were jumping into another hidden flavor, one that’s even less reactive to the physical world. The physicists came up with a name for the category: sterile neutrinos.

The sterile neutrino story was just an idea, but it found support. Around the same time, physicists at places like Los Alamos and Fermilab in suburban Chicago had started to observe neutrino oscillations directly. When they did, they found discrepancies the number of neutrinos of each flavor they expected to appear and how many actually appeared.

“Either some of the experiments are wrong,” says Jones, “or something more interesting and strange is going on that has a different signature.”

So what would that sterile neutrino look like? The name “sterile,” and the fact that physicists haven’t detected them through the normal channels, indicate that this class of particles abstains from the weak nuclear force, too. That leaves just one way they can interact with their environment: gravity.

At the subatomic scales that neutrinos call home, compounded by their puny masses, gravity is extremely weak. Sterile neutrinos would be extraordinarily hard to detect.

That held true well into the 21st century, as the anomalies were too inconsistent for physicists to tell if they amounted to sterile neutrinos. Some experiments found anomalies; others simply didn’t. The sum of experiments seemed to paint a mural of circumstantial evidence. “I think that’s how a lot of people viewed it,” says Jones. “That’s how I viewed it.”

So, physicists created a whole new observatory to test the Los Alamos gallium anomaly. They named it Baksan Experiment on Sterile Transitions, or, in the proud physics tradition of strained acronyms, BEST.

The observatory sits in a tunnel buried more than a mile under the Baksan River in the Russian republic of Kabardino-Balkaria, across the mountains from the country of Georgia. There, before Russia’s invasion of Ukraine threw the local scientific community into chaos, an international team of particle physicists recreated the Los Alamos gallium experiment, specifically looking for missing neutrinos.

BEST found the anomaly again by detecting 20 to 25 percent less germanium than expected. “This definitely reaffirms the anomaly we’ve seen in previous experiments,” Steve Elliot, a particle physicist at Los Alamos National Laboratory and a collaborator on the BEST experiment, said in a statement in early June. “But what this means is not obvious.”

Despite the satisfying result, physicists aren’t getting ahead of themselves. BEST is only one experiment, and it doesn’t explain every discrepancy that’s ever been ascribed to sterile neutrinos. (Other analyses have argued that the Fermilab result couldn’t have been the signs of sterile neutrinos, though they didn’t offer an alternative explanation.)

But if scientists were to find similar evidence in other scenarios—for instance, in the neutrino experiment IceCube, buried under the Antarctic sheets, or in other detectors purposely planned for the sterile neutrino hunt—that would serve up real, compelling evidence that something is out there.

If the BEST result holds—and is confirmed by other experiments—it still doesn’t mean sterile neutrinos are responsible for the anomaly. Other undiscovered particles may be in play, or the whole discrepancy could be the fingerprint of some strange and unknown process. If the sterile neutrino idea is true, however, it would breach the biggest theory behind some of the world’s smallest objects.

“It would be real evidence, not only of physics beyond the Standard Model, but of truly new and not-understood physics,” says Jones.

Simply put, if sterile neutrinos exist, the implications would reach far past particle physics. Sterile neutrinos might make up much of our universe’s dark matter, which holds six times as much of the matter we can see—and whose composition we still don’t understand.