Will this year’s slam dunk contestants perfect the science better than Jordan? 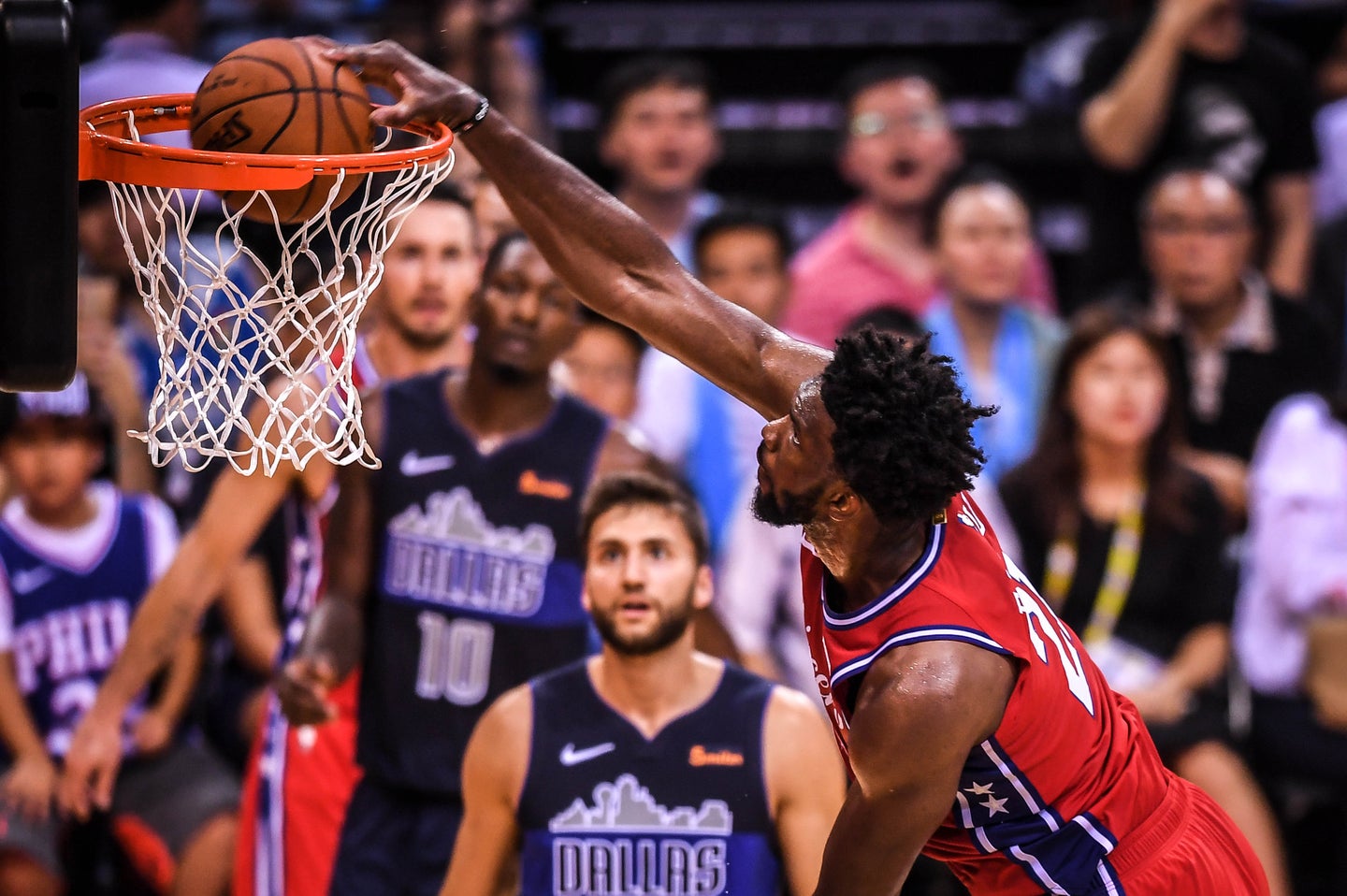 Had it not been for the cameras tracking his every move, Michael Jordan’s jam from the free throw line during the 1987 NBA Slam Dunk Contest would be the stuff of myth. Instead, it has turned His Airness into a model for students of physics as well as students of the game.

Jordan, being of this planet, is bound by the same gravity as the rest of us, meaning the math behind his giant leap should be simple to deduce. He burst from the court with a vertical velocity of roughly 14.8 feet per second and stayed airborne for .92 seconds, reportedly as long as Mike Powell did during his record-holding long jump four years later. That was just enough time to reach the basket nearly 15 feet from where he took off.

To understand Jordan’s physical genius, you need to grasp the concept of the center of gravity, says former college basketball player and Navy physics professor John Fontanella. It’s a universal geometric property—the exact midpoint of where an object’s weight is distributed. For humans, it’s often right around the belly button. For brooms (in case you’re into viral challenges), it’s at the base near the bristles.

A trajectory for a person’s center of gravity is set every time they leave their feet, so it can’t be altered in midair. But the point isn’t actually attached to any part—a donut’s center of gravity, for instance, would be in its hole—meaning that it can be controlled to some extent. With that knowledge, Olympic high jumpers have perfected the Fosbury Flop, keeping enough of their mass below the bar while arcing over it without actually ever elevating their center of gravity.

In 1987 Jordan pulled off a similar trick (consciously or not). In flight, he pulled both of his feet back until they were behind his hips, pointed at the ground. By keeping his toes and his off hand in line, he could stretch his ball hand farther out in front, all while staying upright. Maybe it only got him an extra three inches of paint, but it was enough to make magic.

For an at-home test, Fontanella suggests seeing how high you can reach while jumping with both arms above your head. Then try with one arm raised. If you touched higher the second time, it’s because you’ve lowered your center of gravity and are now pushing your hips to the height your belly button previously reached. Thirty-three years ago, Jordan did the same thing, using his now-iconic form to get his back to where his chest would have reached. “His center of mass isn’t at the basket yet, but his hands are,” Fontanella says of the moment when the ball finally eats net.

Many slam dunk contestants have attempted—and failed—to replicate Jordan’s masterpiece in decades since. It’s even been suggested that humans can’t push more than one second of hang time. But there’s no hard science to prove that. After all, a four-minute mile was considered impossible before Roger Bannister came along. And few thought a 900-degree spin could be achieved on a skateboard until Tony Hawk landed one.

“I don’t know where our limits are,” says James Onate, the director of Ohio State’s Movement Optimization and Prevention for Exercise Sustainment Lab. He thinks that better tracking of the various components in a dunk, as well as smarter looks at how workouts and recovery contribute to elevation gains, will allow athletes to notice new trends in leaping aptitude and achieve more unbelievable highlights. Social media also lets ballers swap knowledge with peers around the world. For instance, Vince Carter grew up on Michael Jordan highlights and took the craft to a new level in the 2000s; now he’s inspired a global generation through Vinsanity Instagrams.

Just like most things in life, though, a slam dunk has to come full circle. One of the most overlooked features to a successful sequence is the touchdown itself. “Your body will only let you jump as high as it believes you can land safely,” says performance coach Alan Stein Jr., who’s worked with Kevin Durant and Kobe Bryant. Learning to alight from a variety of heights and evenly displace the impact on ankles, knees, and hips is a key part of his program. “Any trainer worth their salt should realize improving your vertical jump is just a piece of the puzzle,” he notes. That’s especially true when it comes to becoming comfortable with the in-air acrobatics that set highlight dunks apart.

For those more vertically challenged just hoping to add an inch or two to their jumps, Stein recommends first figuring out whether you’re more comfortable jumping with one leg or two. “Train towards your strengths,” he says, while working with a comprehensive regimen. Along those lines, Onate also suggests working out some less-considered muscles, like those in your toes. Towel scrunches, marble pickups, and barefoot drills could make all the difference between staying grounded or flying through the air, like Mike.