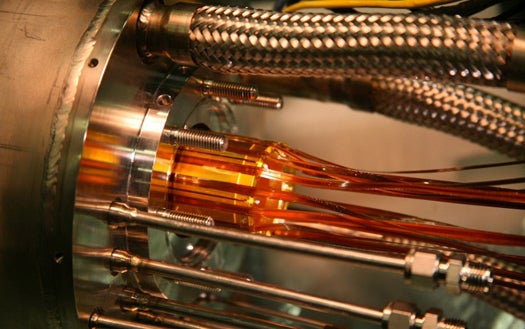 The trap where it happens. N. MADSEN, ALPHA/SWANSEA via Nature
SHARE 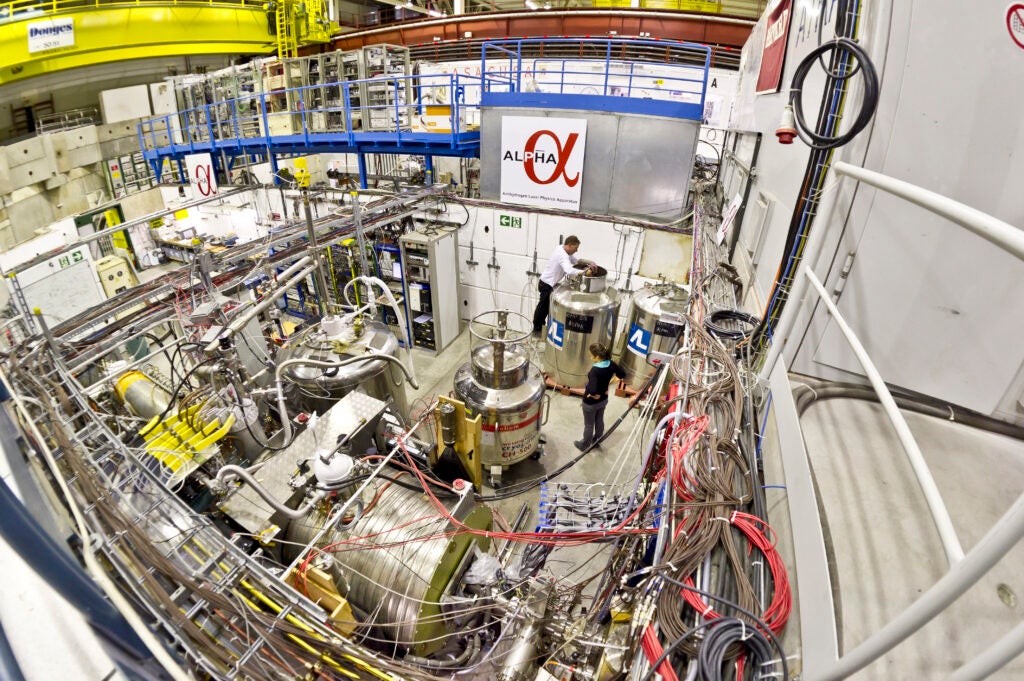 Antimatter, the equal-but-opposite twin of regular old stuff, is a finicky material. It’s only in the past 20 years that scientists have been able to create the simplest atoms of antimatter and keep them stable. Now they have made the first measurements of antihydrogen’s internal structure.

Hydrogen is the first element in the periodic table, and consists of one electron orbiting one proton. Its mirror antihydrogen has one anti-electron, or positron, and one antiproton. If a positron and an electron collide, they will annihilate one other and release energy. Ditto for a proton-antiproton interaction. Because our universe is chock full of electrons, protons, and various combinations of the two, it’s exceptionally difficult to keep either anti-particle around for very long.

That’s exactly the challenge that physicists tackle at CERN’s Antihydrogen Laser Physics Apparatus (ALPHA). They create a vacuum in a magnetic bottle, then toss positrons and antiprotons into it. Ideally, the two will combine into antihydrogen, the bottle will keep the antimatter stable, and then the scientists can study it—with lasers, of course.

A few years ago, scientists trapped antihydrogen for a full quarter of an hour—longer than any previous attempts. In their latest milestone, ALPHA researchers succeeded in the next segment of their mission: They used lasers to study the structure of antihydrogen. The results were published in the journal Nature on Monday.

“This used to be science fiction—that you could hold some antimatter and actually study it like this,” says physicist Jeffrey Hangst, ALPHA’s spokesperson. “It’s something that was not so long ago considered to be impossible. So that the fact that we’re doing this at all is kind of a revolution for us.”

Hangst and his colleagues have made the first ever spectroscopic measurements of antihydrogen. Spectroscopy is a method for revealing the internal structure of atoms. Although we tend to picture an electron orbiting an atom’s nucleus the way a planet orbits a star, it can actually “orbit” at one of several energy levels. When you shine a light on the atom, its electron uses that energy to jump up to a higher energy level. Then it jumps back down, releasing the energy as light in the process.

Because energy levels in an atom are spaced at set distances, the electrons absorb and then release a specific, discrete amount of light energy with each jump. And that amount is reflected in the color of the light. For example, if you wanted to excite the lone electron of a hydrogen atom from its ground state (the lowest energy level) to the level right above that, you’d have to hit the atom with a laser beam at a specific wavelength of ultraviolet light.

To perform the same test on antihydrogen, the researchers at ALPHA first had to create it and hold onto it, a technical feat in and of itself. Then they had to hit it with a laser. In most spectroscopic experiments of this type, they would be shining a light on a trillion or so atoms of matter. In this case, they were working with a mere 15 atoms of antimatter.

“When you only have a few atoms, you have to be much more clever, and it’s much harder,” Hangst says. It also means that there will be less certainty in the measurements. “So this is just a first step,” he adds, “and we’ll spend the next many years improving.”

The trap where it happens

Future work will build on this breakthrough to make precise measurements of antihydrogen’s energy levels. By comparing them to the energy levels of hydrogen, researchers can better understand exactly how matter and antimatter differ. And that could hold the key to one of the biggest puzzles in the universe: Why are we here?

Theoretically, the Big Bang should have produced equal amounts of matter and antimatter. And because the two substances annihilate each other when they come into contact, they would have released a huge amount of energy and then disappeared, leaving an empty universe.

“Antimatter is problem zero,” Hangst says. “For all our successes, we can’t explain why the universe survived.”

Now that scientists have techniques for trapping and studying antimatter, they can start comparing it to matter on multiple fronts. In addition to its energy levels, the ALPHA team is planning an experiment to see how antihydrogen responds to gravity.

“We’re in the right place at the right time; we’ve learned how to do this,” Hangst says. “It opens up a bunch of new possibilities.”