A new study flips the traditional technique on its head. 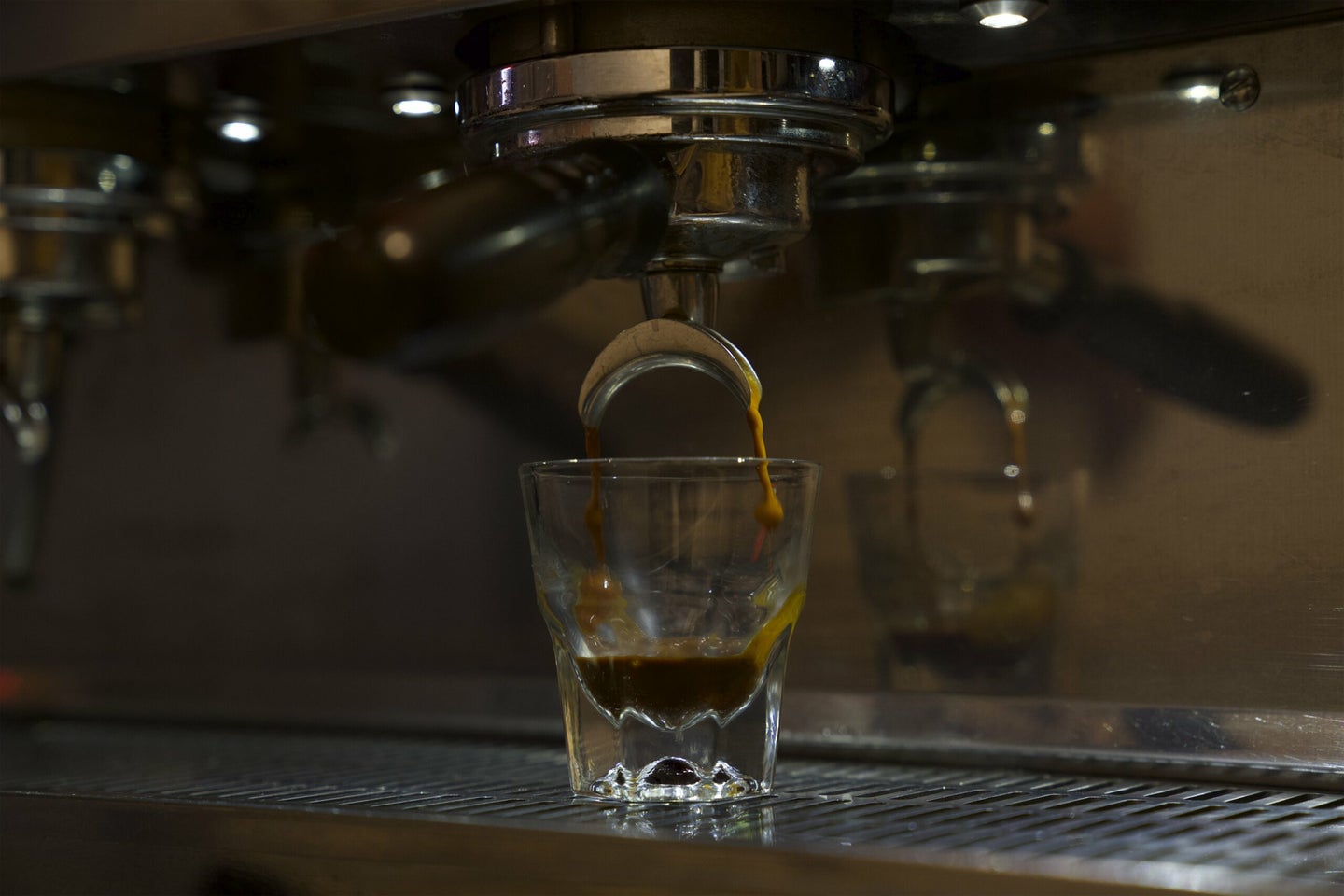 A group of researchers wondered whether the traditional method of using high quantities of very finely ground coffee would indeed produce a primo beverage.
SHARE

Here’s some tiresome news for coffee-enthusiasts everywhere: Your morning cup of joe might not be as invigorating as you thought. The conventional coffee-brewing technique—grinding large amounts of beans as finely as possible—may actually deliver an inferior beverage, and waste grounds in the process. To provide a consistently high-quality drink, coffee producers should instead grind beans more coarsely and use fewer of them, according to a new study published in Matter.

Coffee works its magic on sleep-deprived folks everywhere because it contains heavenly caffeine molecules extracted from coffee beans. That extraction process varies depending on the type of drink you want to make (hello espresso, drip coffee, french press) but they have the same general steps. Raw coffee beans are roasted, ground, and then mixed with hot water. The resulting filtered liquid, when done right, can make many a day better. But a group of researchers wondered whether the traditional method of using high quantities of very finely ground coffee would indeed produce a primo beverage.

To figure that out, researchers first narrowed in on espresso, the concentrated drink that often gives rise to cappuccinos and lattes. Then, they developed a mathematical model to optimally extract espresso from coffee grounds, a difficult task, they soon found, due to the complexity of java’s natural shapes. The beans come in two groups of particle sizes, boulders and fines, similar to the families of exploding volcanic rock.

“You would need more computing power than Google has to accurately solve the physics and transport equations of brewing on a geometry as intricate as a coffee [filter bed],” says co-senior author Jamie M. Foster, a mathematician at the University of Portsmouth.

To calculate the transfer of mass from solid to liquid—that’s what happens when hot liquid combines with coffee grounds to create the signature beverage—scientists turned to battery modeling methodologies. They likened the movement of lithium ions through a battery’s electrodes to molecules like caffeine dissolving out of coffee grounds. Ultimately, the team chose to specifically analyze espresso-style coffee because the drink’s small size tends to magnify any brewing errors.

The researchers looked at various components of the brewing process, including dry coffee mass, water pressure, and the grounds’ coarseness. They found that fine grounds tend to clog espresso machines; ultimately, a stuffed coffee bed will stall the amount of liquid that can get extracted during the brewing process, and produce an uneven taste.

“Most people in the coffee industry are using fine-grind settings and lots of coffee beans to get a mix of bitterness and sour acidity that is unpredictable and irreproducible,” says co-senior author Christopher H. Hendon, a computational chemist at the University of Oregon.

Though you’d expect finely ground beans to wet evenly within machines, some regions get more drenched than others; as a result, over-extracted areas produce bitter flavors and under-extracted ones add sourness. So with this method, it’s hard to get consistent espresso flavor and a high brewing ratio.

Meanwhile, coarse grounds are more efficient and yield more reproducible flavors. They require shorter espresso shot times–between 7 and 15 seconds–unlike the industry standard that falls between about 25 and 35 seconds. Longer shots further the dissolution of coffee compounds and thus carry a burnt essence, which is certainly not for everyone. Still, taste is undeniably subjective. The study does not claim to have mastered espresso flavors, but rather provides a starting point for more research.

Besides a reliable taste, the study also stresses the economic and environmental benefits of using fewer, coarser beans. When implemented in an Oregon cafe, the approach led to a 25 percent reduction in used coffee grounds between September 2018 and 2019. On a broader, nation-wide scale, the team calculated $1.1 billion in potential annual savings.

Less resource-intensive coffee also could be useful as climate change threatens coffee crops around the world. The crop requires a low-carbon dioxide environment with relatively stable temperatures, usually guaranteed by high altitudes near the equator. Yet, major coffee exporters can no longer predict crop outcomes. Ethiopia, for example, has faced rising temperatures and decreasing rainfall; the country could lose up to 59 percent of coffee farmland by century’s end. In 2014, Brazil’s drought doubled global coffee prices.

While the brewing model may not work for everyone, Hendon hopes it could lead to more sustainable and reproducible brewing methods and conditions.

“There is a tremendous dependency on the preferences of the person producing the coffee,” Hendon says. “We are elucidating the variables that they need to consider if they want to better navigate the parameter space of brewing espresso.”