Sustainable batteries could one day be made from crab shells

A material in crab shells has been used to brew booze, dress wounds, and store energy. 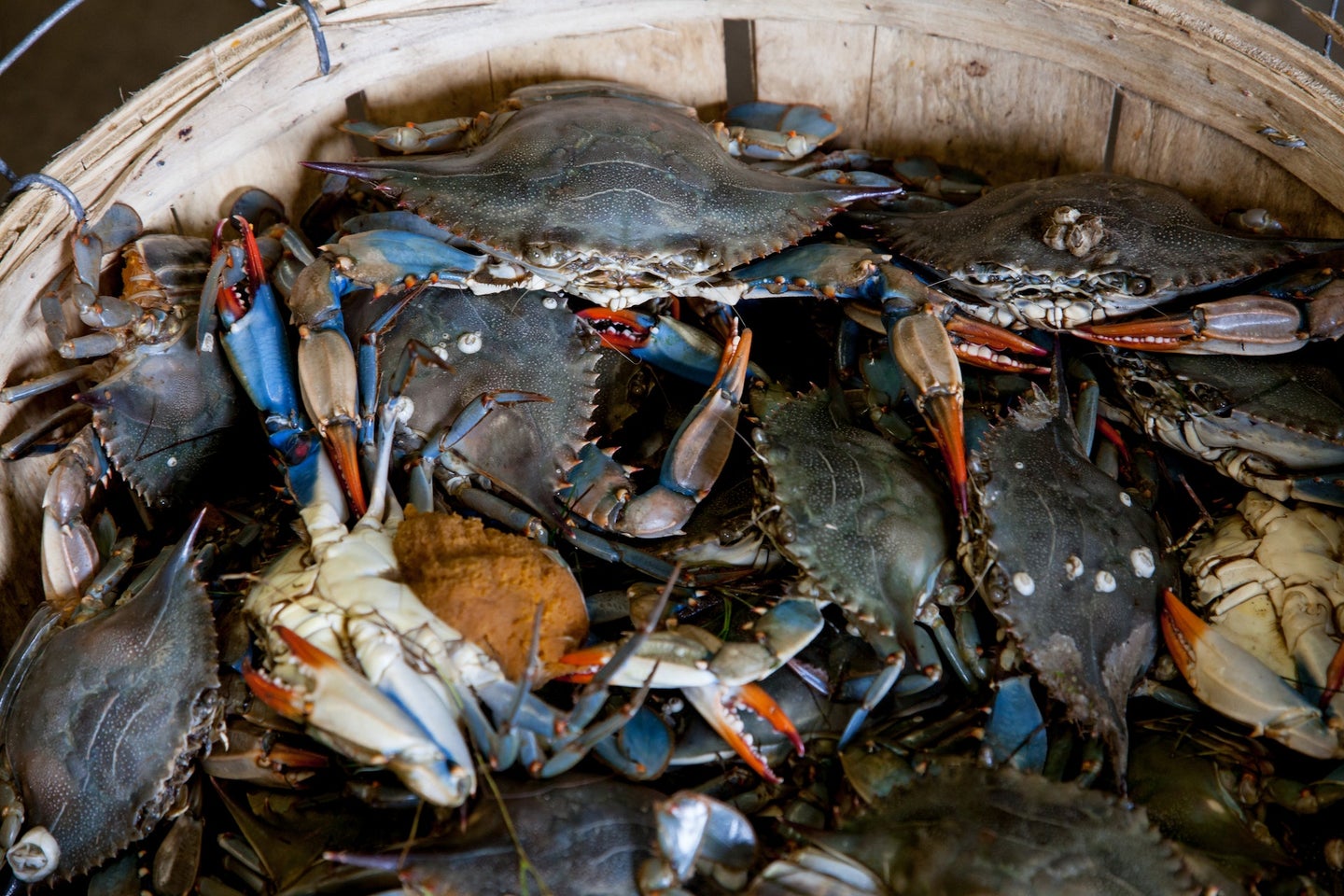 Crabs that we eat contain chitosan in their shells, which scientists are using to make batteries. Mark Stebnick via Pexels
SHARE

There are those who say ours is the age of the battery. New and improved batteries, perhaps more than anything else, have made possible a world of mobile phones, smart devices, and blossoming electric vehicle fleets. Electrical grids powered by clean energy may soon depend on server-farm-sized battery projects with massive storage capacity.

But our batteries aren’t perfect. Even if they’ll one day underpin a world that’s sustainable, today they’re made from materials that aren’t. They rely on heavy metals or non-organic polymers that might take hundreds of years to degrade. That’s why battery disposal is such a tricky task.

Enter researchers from the University of Maryland and the University of Houston, who have made a battery from a promising alternative: crustacean shells. They’ve taken a biological material, easily sourced from the same crabs and squids you can eat, and crafted it into a partly biodegradable battery. They published their results in the journal Matter on September 1.

It’s not the first time batteries have been made from this stuff. But what makes the researchers’ work new is the design, according to Liangbing Hu, a materials scientist at the University of Maryland and one of the paper’s authors.

A battery has three key components: two ends and a conductive filling, called an electrolyte. In short, charged particles crossing the electrolyte put out a steady flow of electric current. Without an electrolyte, a battery would just be a sitting husk of electric charge.

Today’s batteries use a whole rainbow of electrolytes, and few are things you’d particularly want to put in your mouth. A standard AA battery uses a paste of potassium hydroxide, a dangerously corrosive substance that makes throwing batteries in the trash a very bad idea.

[Related: This lithium-ion battery kept going (and going and going) in the extreme cold]

The rechargeable batteries in your phone are a completely different sort of battery: lithium-ion batteries. Those batteries can power on for many years and usually rely on plastic-polymer-based electrolytes that aren’t quite as toxic, but they can still take centuries or even millennia to break down.

Batteries themselves, full of environmentally unfriendly materials, aren’t the greenest. They’re rarely sustainably made, either, reliant on rare earth mining. Even if batteries can last thousands of discharges and recharges, thousands more get binned every day.

So researchers are trawling through oceans of materials for a better alternative. In that, they’ve started to dredge up crustacean parts. From crabs and prawns and lobsters, battery-crafters can extract a material called chitosan. It’s a derivative of chitin, which makes up the hardened exoskeletons of crustaceans and insects, too. There’s plenty of chitin to go around, and a relatively simple chemical process is all that’s necessary to convert it into chitosan.

We already use chitosan for quite a few applications, most of which have little to do with batteries. Since the 1980s, farmers have sprinkled chitosan over their crops. It can boost plant growth and harden their defenses against fungal infestation.

[Related: The race to close the EV battery recycling loop]

Away from the fields, chitosan can remove particles from liquids: Water purification plants use it to remove sediment and impurities from drinking water, and alcohol-makers use it to clarify their brew. Some bandages come dressed with chitosan that helps seal wounds.

You can sculpt things from chitosan gel, too. Because chitosan is biodegradable and non-toxic, it’s especially good for making things that must go into the human body. It’s entirely possible that hospitals of the future might use specialized 3D printers to carve chitosan into tissues and organs for transplants.

Now, researchers are seeking to put chitosan into batteries whose ends are made from zinc. Largely experimental today, these rechargeable batteries could one day form the backbone of an energy storage system.

The researchers at Maryland and Houston weren’t the first to think about making chitosan into batteries. Scientists around the world, from China to Italy to Malaysia to Iraqi Kurdistan, have been playing with crab-stuff for about a decade, spindling it into intricate webwork that charged particles could cross like adventurers.

The authors of the new work added zinc ions to that chitosan structure, which bolstered its physical strength. Combined with the zinc ends, the addition also boosted the battery’s effectiveness.

This design means that two-thirds of the battery is biodegradable; the researchers found that the electrolyte broke down completely within around five months. Compared to conventional electrolytes and their thousand-year lifespans in the landfill, Hu says, these have little downside.

And although this design was made for those experimental zinc batteries, Hu sees no reason researchers can’t extend it to other sorts of batteries—including the one in your phone.

Now, Hu and his colleagues are pressing ahead with their work. One of their next steps, Hu says, is to expand their focus beyond the confines of the electrolyte—to the other parts of a battery. “We will put more attention to the design of a fully biodegradable battery,” he says.