What the heck is a quantum network? 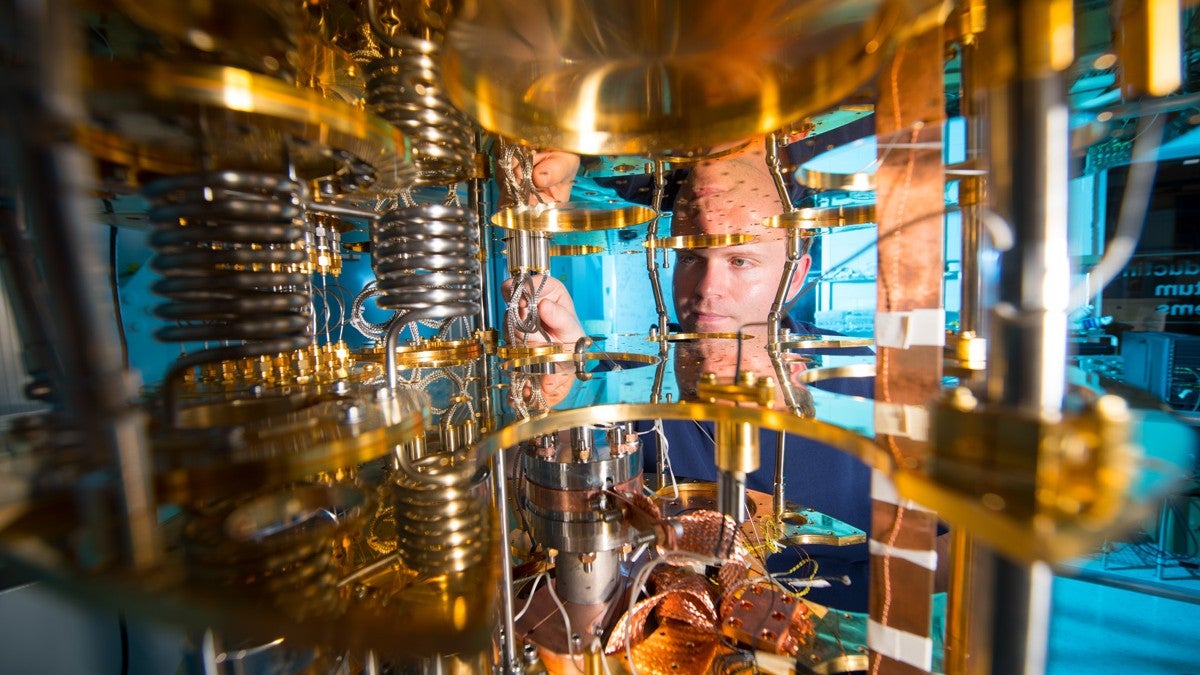 Quantum computers have to be kept at a temperature just above freezing, which limits their size. Reidar Hahn, Fermilab
SHARE

While it’s currently possible to send encrypted messages with apps like Signal, no system is completely unhackable. But one day, encryption could be much, much harder to crack—thanks to networks that take advantage of quantum mechanics, the esoteric branch of physics that governs the universe at the tiniest scales.

You’re almost certainly reading this story on an electronic device that operates, at its most basic level, with bits built from silicon-based transistors. In the non-quantum world, what scientists call the “classical” world, each of those bits holds a single number: a zero or a one.

Quantum devices use their own quantum bits, or “qubits” (pronounced like “Q-bits”), which play by the rules of quantum mechanics. That allows qubits to act in weird and wondrous ways. A qubit can, for instance, hold both zero and one at the same time.

A quantum network can transmit these curious qubits: for example, photons, which scientists can send through the fiber-optic lines that underpin the classical internet.

These networks, still in the experimental stage, serve to link quantum devices together. “Now that quantum computers are really starting to be built, people are really starting to think more seriously about networking them,” says Christoph Simon, a researcher specializing in quantum optics at the University of Calgary.

But the original (and best-known) use of quantum networks is to create connections that are—in theory—far more inscrutable than anything on the highly fallible classical internet.

These hyper-secure connections take advantage of a principle called quantum entanglement. Simply put, you can create particles that are “entangled.” If you then observe the state of one of them, you’ll affect the state of its entangled partner, no matter how far away that other particle is.

You can use that to encrypt information. Suppose you want to send a message to your spy friend in the next city over. The both of you would each receive one of a pair of entangled photons. Measuring those photons’ states would give both you and your colleague a unique key, which you could use to encrypt a message, and which your friend could in turn use to decrypt it.

If somebody tried to tap in for the key, that very act would influence the photons, and you’d know. “You can’t eavesdrop and make measurements on the channel without people being able to detect that,” says Nathalie de Leon, a professor of electrical and computer engineering at Princeton University. “Also, you can’t just intercept and copy the information.”

You can’t copy a qubit thanks to another quantum quirk called the “no-cloning principle.” But that very principle is also a quantum network’s fatal flaw. If you send a qubit down a line, then it can only go so far before it fades. In the classical internet, you can simply forward that information along. But that won’t fly in the quantum world, because you can’t copy a qubit.

As a result, current quantum networks can only send qubits a few kilometers away. That means if you send qubits through fiber right now, you can’t do it at a scale larger than a city.

“Being able to do anything at longer distances requires fundamentally new technologies,” says de Leon. There are shortcuts, but those aren’t necessarily secure. They’re like relaying your message via middlemen—and you can’t always trust middlemen.

It’s also possible to avoid fiber entirely and send a qubit across what researchers call “free space”—literally the open air. It’s like flashing a light from one mountaintop to another. You need to physically see the other side, making it impractical for most cases. And it’s prone to atmospheric interference.

But it does work in the vacuum of space. That’s what allowed the Chinese satellite QUESS to “teleport” a qubit from orbit to the ground in 2017. It’s slow and not especially efficient, but the scientists behind QUESS (and the Chinese government) hope that the technology could form the basis for a quantum satellite network.

[Related: Quantum teleportation is real, but it’s not what you think]

As impressive as the accomplishment is, de Leon says it builds on existing work. “It was a very important demonstration … and I think we do learn a lot as a community,” she says. “But everything that they did, you could have written down ten years ago, fifteen years ago.”

Still, that’s where some scientists are turning their attention, building ground stations to receive qubits from space. QUESS soon won’t be alone: Another satellite, QEYSSat, will be stewarded by a number of scientists from Canadian institutions, including Christoph Simon.

“We are in the process of determining what’s possible and reasonable,” says Simon. “Frankly, we are thinking about the next [satellite].”

So could all these links eventually evolve into a “quantum internet”? After all, today’s classical internet began as a fledgling network of connections spindled between labs and universities.

But perhaps the biggest challenge is that nobody agrees on what to actually build a quantum network from. Today’s quantum networks largely use relatively simplistic equipment. Moving forward, scientists are trying to build more sophisticated nodes that could use quantum trickery, get around the no-cloning principle, and make longer quantum networks.

“We haven’t … identified the thing that’s like the silicon-based transistor,” says de Leon.

Some researchers want to read qubits by trapping them in rubidium vapor. Others want to do something similar with a cage of magnets and lasers. De Leon’s group wants to use something (literally) brilliant: diamonds. A type of imperfection in diamonds called the “nitrogen-vacancy center” can act as a sort of quantum memory.

“The basic unit is still up for grabs,” says de Leon.

Until fundamental issues like these are sorted out, then quantum networks will, for the most part, remain lab-bound. And as curious as quantum networks might be, it’s unlikely they’ll fully replace the Internet anytime soon.

“It is almost certain that classical networks will need to run alongside quantum networks to make them usable in a practical sense,” says Slattery.