What would happen if I ate my computer? Asking for a friend. 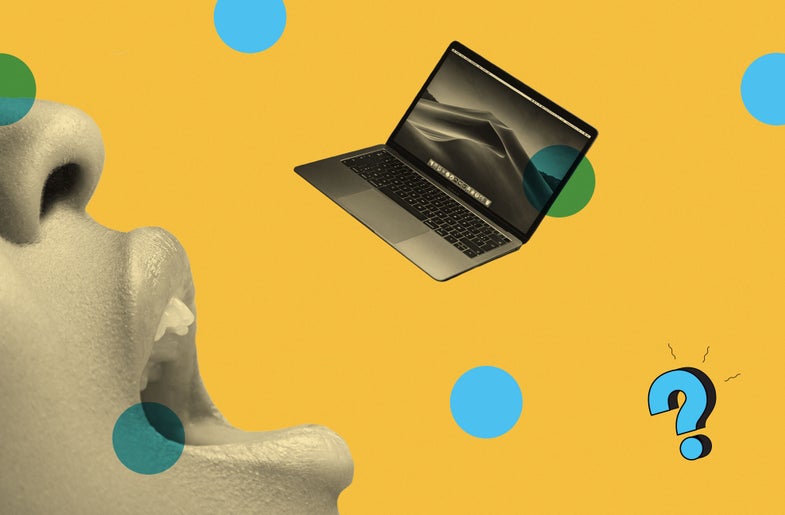 The Guinness book of world records states that Michel Lotito died at age 57, of natural causes. But not before this competitive eater had consumed 18 bicycles, 15 supermarket carts, seven TV sets, six chandeliers, two beds, a pair of skis, a low-calorie Cessna light aircraft, and a computer.

It’s unclear what compelled Lotito to do this, and whether he was aware of the many ways he was jeopardizing his health.

First things first: No nutritionist, doctor, or even the trendiest of dieters would recommend or applaud eating a computer. But it begs a ridiculous yet perhaps equally intriguing question: Is consuming one really that dangerous? Many of the same metals that are found inside electronic devices—magnesium, iron, and sodium—are also found inside the human body. In the event of a dare, would consumption be possible?

Unfortunately, the benefits of eating a computer do not come close to outweighing the risks, many of which include death. The first potential peril is the choking hazard. Even competitive eaters have been unable to swallow much softer foods. In fact, last year, two Nathan’s contestants died after choking on a doughnut and a pancake, respectively, according to Metro News. Silicon and fiberglass are much harder to gulp down. Even Lotito cut his metallic meals into pieces that were one to two centimeters long. On top of that, anything that is long or sharp has the potential to scratch or tear the eater’s esophagus, the long tube that connects the mouth to the stomach.

If you did somehow manage (like Lotito did) to pulverize the computer and then swallow it without issue, heavy metal poisoning would be your next obstacle. Circuit boards sometimes contain tiny amounts of arsenic — not enough to kill you immediately, but if you ate several computers, the dose would add up. Aluminum, a common component found in the casings of both the computer and its hard drive, has no biological function in the human body and seems to gum up normal body processes. Some case reports have described that people in the end stages of liver disease who are no longer able to flush aluminum out of of their bodies suffer nerve damage, presumably from the metal. Older computer monitors also contain up to eight pounds of lead, as well as mercury, arsenic, cadmium, and beryllium, according to the Long Island manufacturing center, a recycling and e-waste drop-off site.

Most people are aware that lead isn’t great for you—immediate side effects can include nausea, vomiting, and abdominal pain. If the lead poisoning continues, the victim can eventually die, typically from kidney failure. In 2006, a child died after swallowing a small lead charm—eating an entire computer’s worth of the metal is a viable way of ingesting enough to kill. So how did Lotito survive? In the child’s case, the lead charm got stuck in the kid’s stomach, where acids slowly broke it down. If it hadn’t, the piece of metal would have passed through the digestive system quickly and would have caused less damage, according to Helen Binns, a professor of pediatrics and preventative medicine at Northwestern University’s Feinberg School of Medicine. “If you had a fishhook that got stuck in your intestines, that would cause problems,” she says. “If you swallow a bead or something like that, it just passes through your bowel.”

But metals aren’t the only form of toxic indigestion you might endure. The optical drive, the part that allows you to read CDs (unless you have a new Mac), is covered with a light-sensitive substance called a photoresist application. Studies have shown that this doesn’t seem to be very good for lab animals, though it was not fatal. When scientists gave it to mice and rabbits, it caused inflammation around their eyes and skin, as well as weight gain.

The flame retardants that keep your electronics from easily combusting are not delicious or nutritious, either. These substances surround the computer’s copper wires and drift into the atmosphere if burned or crushed as waste. In addition to disrupting fertility, some evidence suggests these flame retardant chemicals might also disrupt human hormone systems, according to the National Institute of Health, and some studies have shown a correlation between certain types of flame retardant and cancer.

Eating computers, though still not safe, has become less deadly over time. The European Union banned cadmium and lead from computers in 2006 and newer circuit boards are less likely to contain arsenic. In 2009, the Institute of Electrical and Electronics Engineers created environmental guidelines that companies and institutions can adhere to, and the even more recent Green Electronics Council grades companies according to how recyclable they are. However, old computers still turn up at recycling centers. “Sometimes people will hold onto things for a long time — we get 40 or 50 year old TVs,” says Jason Linnell, executive director at the National Center of Electronics Recycling. “They might have the lead, the mercury, cadmium. These are the types of materials that you want to prevent from going into the landfill.”

In the future, humans may eat computers on purpose. Right now scientists are developing nanocomputers that patients will be able to swallow like a pill. These tiny robots will be able to monitor your vital signs from the inside, and may also, in the future, be able to fill in one of your hundred hard-to-remember passwords. Prototypes already exist for people like astronauts, firefighters, and football players, whose caretakers want to make sure they do not overheat. Scientists are working on developing computers that are more biodegradable — like this computer chip made of wood-based nanocellulose.

Since most of us lack Lotito’s steel-crushing stomach, recycling is the much more appealing (and safer) option. “Things have definitely gotten better,” says Linnell. “We have a lot more well-qualified recyclers.” In some cities, you can even be fined for putting old computers in the pile with normal trash. Instead, many manufacturers take back old products and many cities offer e-waste deposit locations. There is no need to eat your computer.

Ask Us Anything
food
podcasts