By combining two materials, researchers have made a solid that conducts heat like a gas. 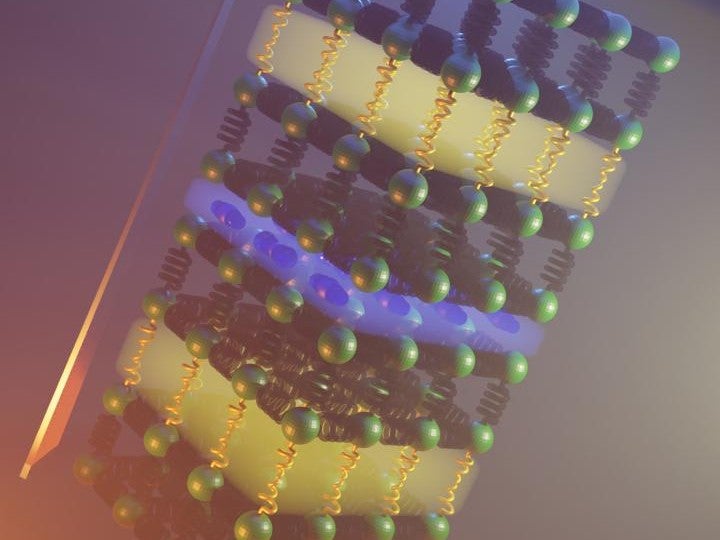 A material that’s a terrible heat conductor could make a superb insulator, and materials like it could play a key role in bringing the world to net-zero greenhouse gas emissions. University of Liverpool
SHARE

You probably know that hot tea in a metal cup is far more unpleasant to pick up than hot tea in foam. It’s a classic example of how some materials are better at conducting heat than others. It’s why houses are often insulated with a material like cellulose or fiberglass; it’s why hot liquids come in foam. In particular, metals conduct heat better than non-metals, and solids conduct heat better than gases. That’s why double-glazed windows are better at insulating your house: If you include a thin pocket of air within your windows, then that air will do a lot.

Researchers at Liverpool University in the U.K. have created a material that, they say, has the worst heat transfer of virtually any solid material humans have ever grasped. If that sounds like a strange direction to go down, it isn’t—a material that’s a terrible heat conductor could make a superb insulator, and materials like it could play a key role in bringing the world to net-zero greenhouse gas emissions. The researchers published their work Thursday in Science.

“The material we have discovered has the lowest thermal conductivity of any inorganic solid and is nearly as poor a conductor of heat as air itself,” says Matt Rosseinsky, a chemist at Liverpool University in the U.K., and one of the study’s authors, in a statement.

Heat conductivity has to do with atomic structure. Even though gases may be hotter than liquids or solids, they conduct heat more poorly because their atoms are spread farther apart. The more ways the atoms in there can vibrate, the more ways those atoms can conduct heat. These vibration patterns are called phonons; the more a material has, the better able it is to conduct heat.

So, one of the keys to making materials that are worse conductors, and better insulators, is to tinker with a material’s atomic structure. Therefore, you’ll change how the phonons play across that material.

[Related: What the heck is a quantum network?]

At Liverpool University, the researchers turned to two different compounds: one called bismuth oxychloride (an iridescent solid that’s often used to give cosmetics a pearly vibe) and a second called bismuth oxyselenide.

Both materials have phonons that work in different directions. So, by stacking them together into a single pile, researchers could fuse them into a material that would be particularly bad at transferring heat across that pile’s layers.

Jon Alaria, a physicist at Liverpool University and one of the study’s authors, believes that making low-conductivity materials like theirs has more applications than just breaking records. “This strategy could be applied to other important fundamental physical properties such as magnetism and superconductivity, leading to lower-energy computing and more efficient transport of electricity,” he says, in the statement.

Heat loss is their main obstacle. In fact, it’s not hard to see heat loss as an evil spirit haunting every part of the world’s energy systems. A lot of that heat loss comes from friction, but much of it also comes from heat lost through materials. If the energy that’s going into heating your house is escaping into the air outside, then it’s a waste, and it’s a waste that’s draining from our energy system.

[Related: We finally know what sparks the Northern Lights]

In fact, through a mosaic of inefficiencies—bad usage, losses in the electrical grid, and indeed, heat being conducted away—analysts at Lawrence Livermore National Laboratory estimate that a staggering two-thirds of U.S. energy generation never actually reaches its end purpose.

So, scientists say, there’s good reason to keep researching materials like these. Making better insulation and better materials could heavily cut back on energy use, and go a long way towards reducing the world’s reliance on fossil fuels.