Buzz Aldrin is auctioning off rare pieces of US space history

Buy the pen that saved the Apollo 11 mission for a cool million (or more). 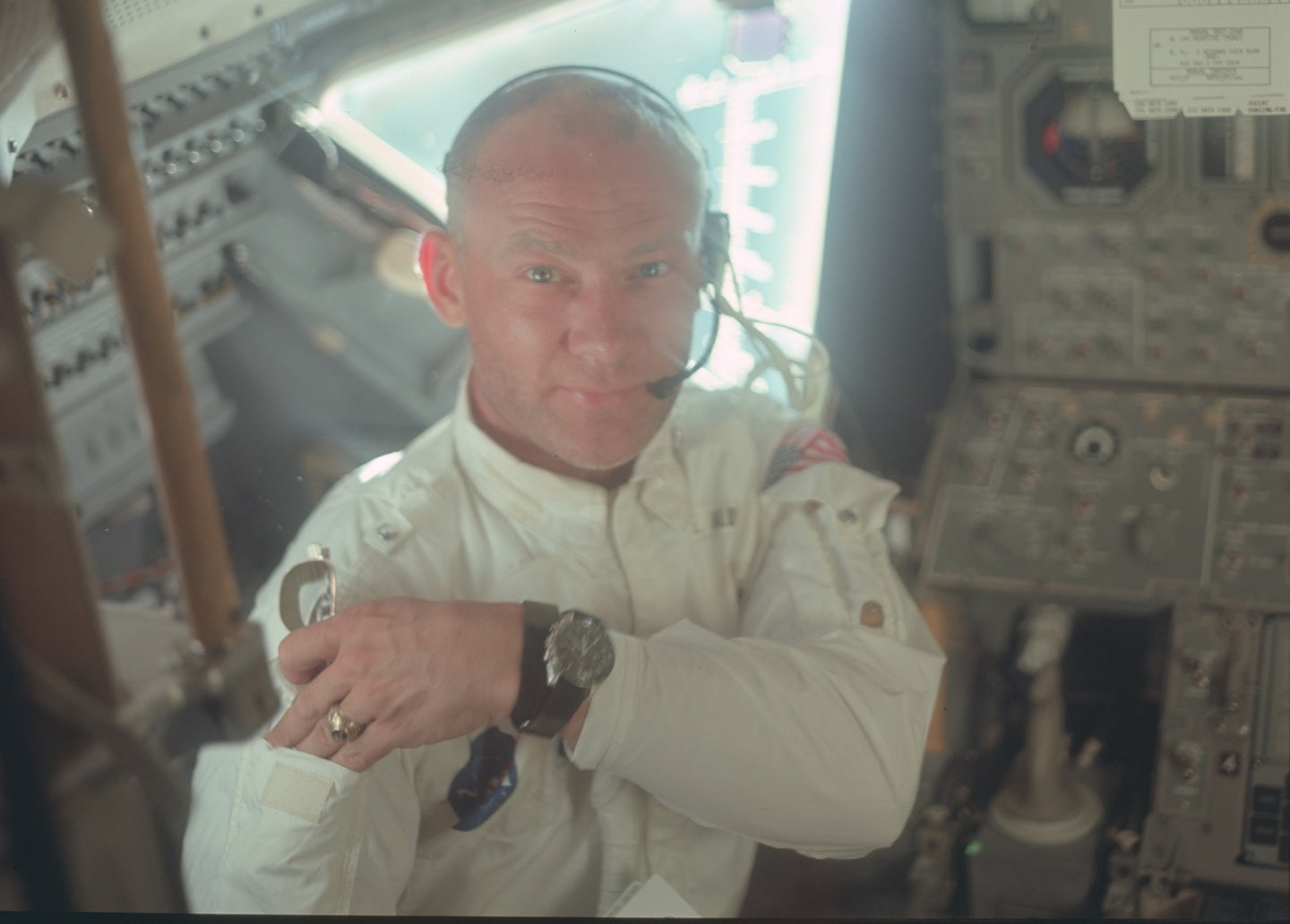 Famed Apollo 11 astronaut Buzz Aldrin has teamed up with Sotheby's to auction off his space memorabilia. NASA
SHARE

At 92 years old, Buzz Aldrin has lived a full life. He graduated third in his class from the US Military Academy, earned a PhD in astronautics from the Massachusetts Institute of Technology, and joined NASA at the tender age of 33. Just three years into his career with the space agency, he conducted his first mission—the last of a dozen in the American Gemini series.

The famous lunar landing mission, Apollo 11, came another three years later in July of 1969. All told, Aldrin spent 12 days in space, 2.25 hours on the moon, and countless periods of time flying fighter jets in the Korean War before retiring from NASA and the US Air Force in the 1970s. His work in the upper reaches of the Earth’s atmosphere and orbit earned him a lifetime of celebrity—and now, an exhibit at a Sotheby’s auction. On July 26, several of Aldrin’s personal mementos will be up for bid at the York Avenue Galleries in New York City, some of which can only be “legally owned if acquired from an astronaut,” the fine arts company stated. (Also up for sale in the same week: a nearly intact Gorgosaurus fossil and an actual chunk of the moon.)

[Related: The history of science is up for sale]

Some of Aldrin’s items, including a gold congressional medal and a molded communicate earpiece, will come with a “digital signature” NFT produced with the help of the Ethereum blockchain platform. Blockchain dealings are known to be energy-intensive and detrimental to the environment at large.

Winning bids are expected to range from the tens of thousands to the millions for each collectible. Take a look at five of the Apollo 11-related steals below, and learn about their significance to Aldrin’s life and US space history as a whole.

Among the exceptional artifacts on offer from the collection is Buzz Aldrin’s flown Apollo 11 inflight coverall jacket, serial number 1039, which he wore on the historic mission to the moon and back. The jacket is the only flown garment from the Apollo 11 mission available for private ownership; both Armstrong and Collins’ inflight coverall jackets are housed at the Smithsonian, along with all three crew members’ A7L pressure suits. The practical elements of the jacket can be seen clearly, including reinforced holes in the upper torso through which the medical connections could pass. Buzz’s name “E. Aldrin” is also clearly printed above the Apollo 11 mission emblem with a flag of the US emblazoned on the left shoulder, on the right lapel is the famous NASA “meatball” logo.

Until the tragic Apollo 1 fire in 1967, spacesuits and inflight gear were crafted from highly flammable materials, such as nylon. The fire triggered a review of the suit and inflight garments’ design, which resulted in modifications including the development of a new fire-proof material known as Beta Cloth, a novel technology which was both fire-resistant and tough enough to help protect the astronauts from micrometeroid blasts while outside the spacecraft.

Flown documents from the Apollo 11 mission are incredibly rare, and those flown to and used on the lunar surface even more so. It could be argued that the Apollo 11 LM Systems Activation Checklist is the rarest of all, as it was never intended to return to Earth. It contains numerous manuscript notations made by Aldrin while on the lunar surface, and bears a “Jettison” tag adhered to the front cover. Because the Lunar Module had limited fuel, the crew was directed to jettison any non-essential items to lighten the load, placing them in a special bag that was then thrown out onto the lunar surface. Aldrin chose instead to retain this book, which has proved to be an incredibly rich source of information not previously known about the mission, including additional items that were transferred from the command module to the Lunar Module prior to descent (snacks, tissues, and the molded earpiece offered in this sale), as well as numerous notes on the state of the lunar module following their descent.

The checklist contains a wealth of detailed information revealing how Aldrin and Armstrong pressurized the lunar module, opened the tunnel hatch for inspection and looked at the tunnel rim to check for the alignment between it and the command module. There are also circuit breaker diagrams, sections for writing navigational data and records of the pressure of the oxygen tanks, the voltage stored in the batteries, and communication tests between Mission Control and the command and service module.

This unassuming pen became a vital resource to the astronauts of Apollo 11 when the critical ascent engine arming circuit-breaker switch required for the lunar module to re-ascend from the moon’s surface broke off, placing the lives of all three crew members in danger. While engineers at Mission Control in Houston were trying to solve the problem, Buzz ingeniously used the felt tip pen he had used to make inflight notations (on the various documents in this sale). The pen proved an essential lifeline, as Aldrin and Armstrong could not have used their fingers or and small metal objects onboard for fear of electrocution or potentially shorting the entire electrical system and marooning them on the Moon. Aldrin’s quick thinking and calm, decisive action directly led to the crew’s accomplishment of the goal set out by President John F. Kennedy, “of landing a man on the Moon and returning him safely to Earth.” Until now, the circuit breaker switch and pen have been on loan from Aldrin at various museums, including the Museum of Flight in Seattle and the Smithsonian National Air and Space Museum.

Presented to Aldrin to commemorate the first-ever MTV Video Music Awards (VMAs) in 1984, this “Original Moonman” statuette represents the deep and wide-ranging cultural influence of the Apollo 11 walk. With Aldrin’s permission, MTV chose the image of Aldrin planting the United States Flag on the moon as the symbol for their new award program the concept being inspired by their inaugural broadcast in August of 1981, which featured footage of the Apollo 11 moonwalk, including the famous images of Buzz on the lunar surface, with animated MTV logos in place of the US flag. An indisputable cultural icon, Aldrin’s silhouette from his lunar adventure remains the symbol of the VMAs nearly 40 years later, and is a testament to his indelible place in popular culture.

Elsewhere in the sale is Aldrin’s now infamous “Go Army Beat Navy Banner,” a hand-stitched piece of fabric which he unveiled during his Gemini XII spacewalks, and is particularly rare for its direct exposure to the vacuum of space. Aldrin remembers the banner fondly: “It just so happens that the annual Army/Navy football game was played in November. Each season cheers of ‘Go Army Beat Navy’ or ‘Go Navy Beat Army’ ring out at the game.” His fellow astronaut Tim Stafford had brought a “Beat Army” sign into space on Gemini 6A and so, as a West Point graduate, Aldrin felt an answer was necessary; “I had this banner made…and carried it with me during one of my spacewalks.” He adds: “Army beat Navy 20-7 that year. I would like to think that my high-flying tribute to Army might have helped the win.”