11 Relics Of Space History That You Can Buy

The first auction since Congress passed a law allowing astronauts to sell their mission souvenirs features the Space Magna Carta, a rocket engine and a lot of signed memorabilia. 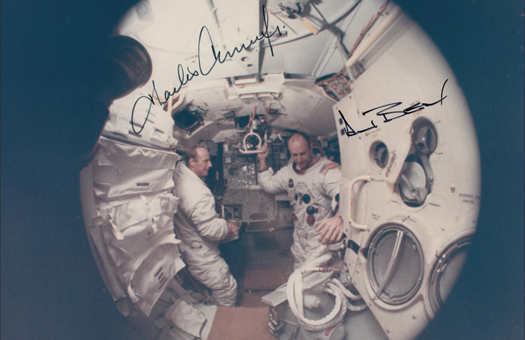 When astronaut James Lovell put his Apollo 13 Lunar Module Activation Checklist up for auction in Dallas last year, the artifact sold for a record $388,375 — and got him in hot water with NASA, which said that he didn’t have the right to sell it in the first place. Finally, in September, Congress passed a law granting astronauts from Mercury, Gemini and Apollo-era missions full rights over any artifacts they received.

On Monday, Bonhams auction house in New York is hosting the first sale of space-related artifacts since the law’s passage. Up for auction is a deluge of memorabilia from the history of flight and space exploration, including signed photos, rocket engines, spacecraft models, even random space-suit parts. If you’ve got $70,000 to spare, you might consider putting in a bid on the Space Magna Carta, a certificate symbolizing the end of the space race, or perhaps a few relics from the first mission to the moon — like a disc carrying messages of goodwill from Earth to our alien friends.

We collected a few of the most intriguing items below. You can check out the full catalog here. 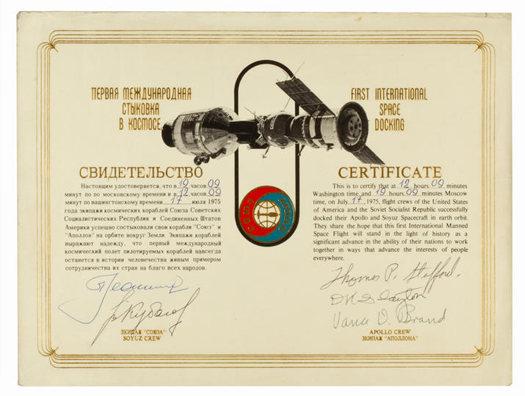 This document, a certificate of U.S.-Soviet space cooperation, is nicknamed the Space Magna Carta. Signed on July 17, 1975, by the U.S.S.R. and the U.S.A., the day the American Apollo spacecraft docked with its Soviet Soyuz counterpart in orbit, it represents the symbolic end of the space race. There are only four such documents in existence — this is one of the Russian copies. 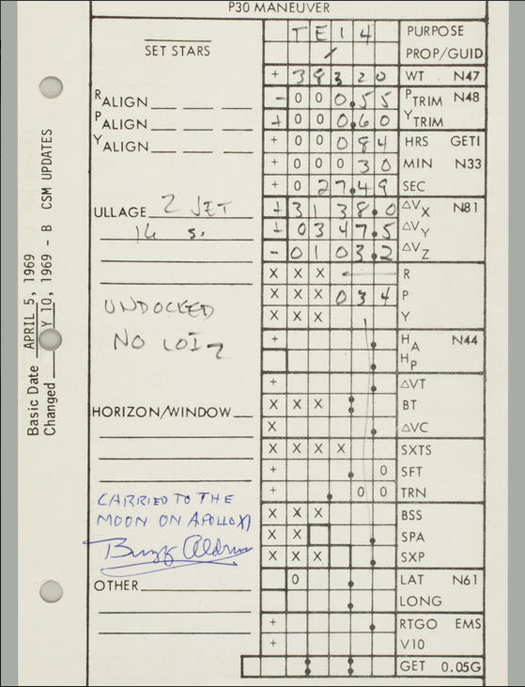 All three of the Apollo 11 crew members (Neil Armstrong, Buzz Aldrin and Mike Collins, who had to pilot the spacecraft while the other two got to play around on the Moon) recorded flight notes on this maneuver card. It’s signed by Buzz Aldrin and has been in his private collection since 1969. One does not simply fly an Apollo spacecraft. General Motors made this 1965 study guide to the guidance and navigation system. This one is signed by Apollo 11 pilot Mike Collins, who presumably passed the 16-hour course. 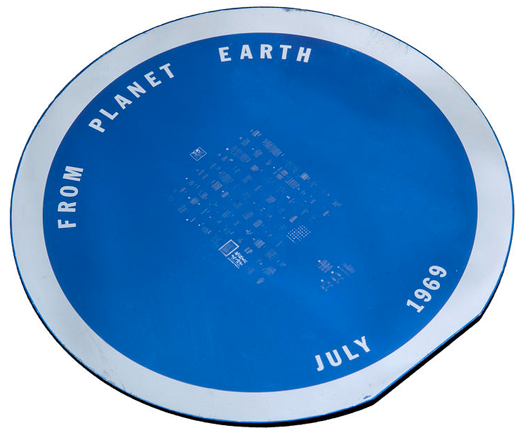 We Come In Peace

Neil Armstrong and Buzz Aldrin left a version of one of these silicon discs on the lunar surface in 1969. It bore messages from 73 world leaders etched onto the surface. In case the aliens wanted to play Frisbee? 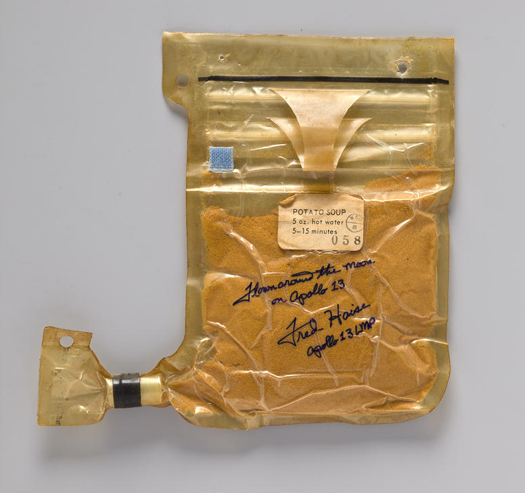 Nothing says “history buff” like a 40-year-old bag of potato soup. This particular bag of deliciousness flew around the Moon with the Apollo 13 mission. The mission’s 1970 lunar landing was aborted due to a loss of electrical power. The crew couldn’t get hot water to turn this into an edible meal, so it came back to Earth with lunar module pilot Fred Haise.

Astronauts Are Hipsters Too 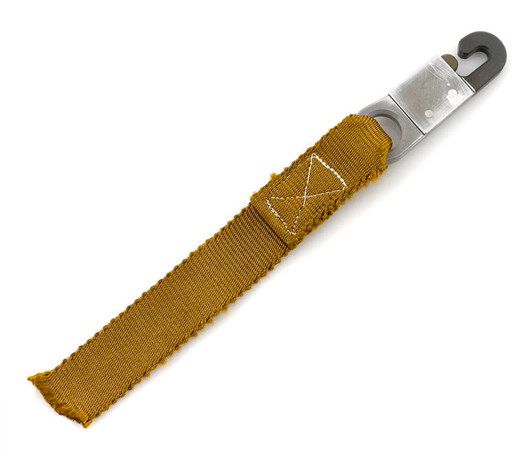 If you really want to prove your love of space, you’ll drop a $8,000 to $12,000 bid on this 3-inch lunar module hammock hook from the Apollo 15 mission, the first expedition to the Moon that was long enough to require that astronauts actually take off their space suits and sleep. 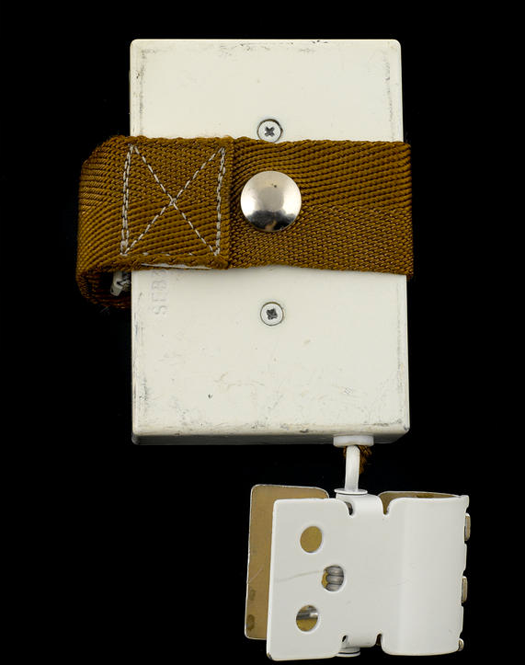 This EVA Retractable Tether belonged to Dave Scott, commander on the Apollo 15 mission. It was designed to strap to a space suit to to carry tools for rock and soil sampling, but the original tether broke during the first extravehicular activity. Scott exclaimed “My yo-yo doesn’t cut it out here. Huh. My yo-yo’s broken. There went my yo-yo.” 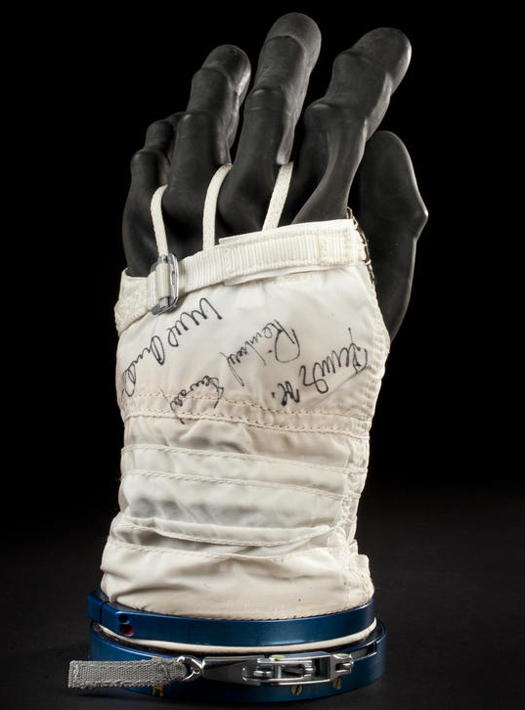 This glove comes from a pressure suit worn in training by Aleksander Kaleri, a Latvian-born cosmonaut who has spent the second-longest time in space of any person. It’s also signed by two German astronauts and Vladimir Remek, a Czechoslovak cosmonaut considered to be the first astronaut from the European Union. 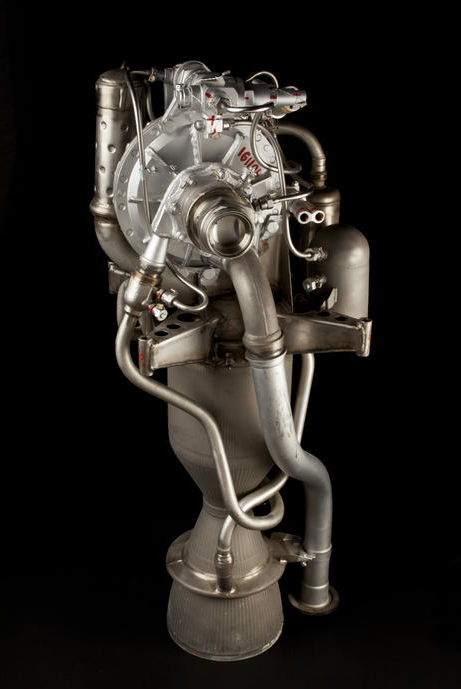 Not satisfied with a mere souvenir from a mission? Buy yourself an actual rocket engine! This liquid propellant sustainer powerplant was made by Alexei M. Isayev, a celebrated engine designer whose rocket engines propelled everything from the first manned spaceflight to the first probe to the moon. This one was designed for a surface-to-air missile. 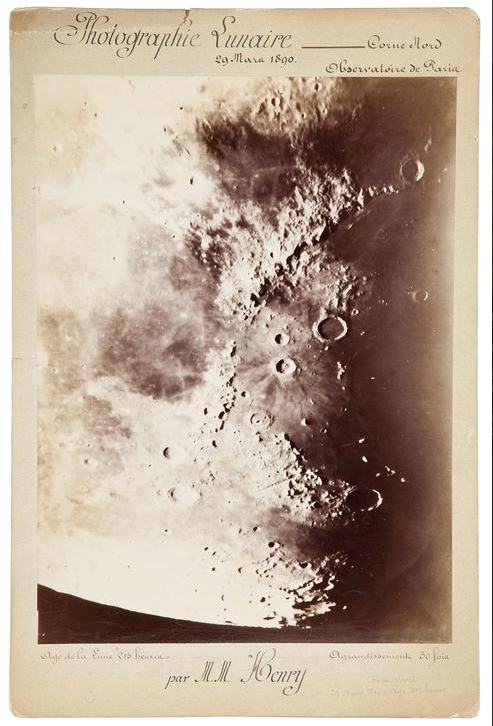 A photograph taken from the Paris Observatory on March 29, 1890 by Paul and Prosper Henry, French brothers, astronomers and telescope makers. The lunar crater Henry Freres is named after them.
Apollo
artifacts
astronauts
cold war
history