Experts are concerned that promoting cryptocurrency is counterproductive to conservationist and environmentalist goals. 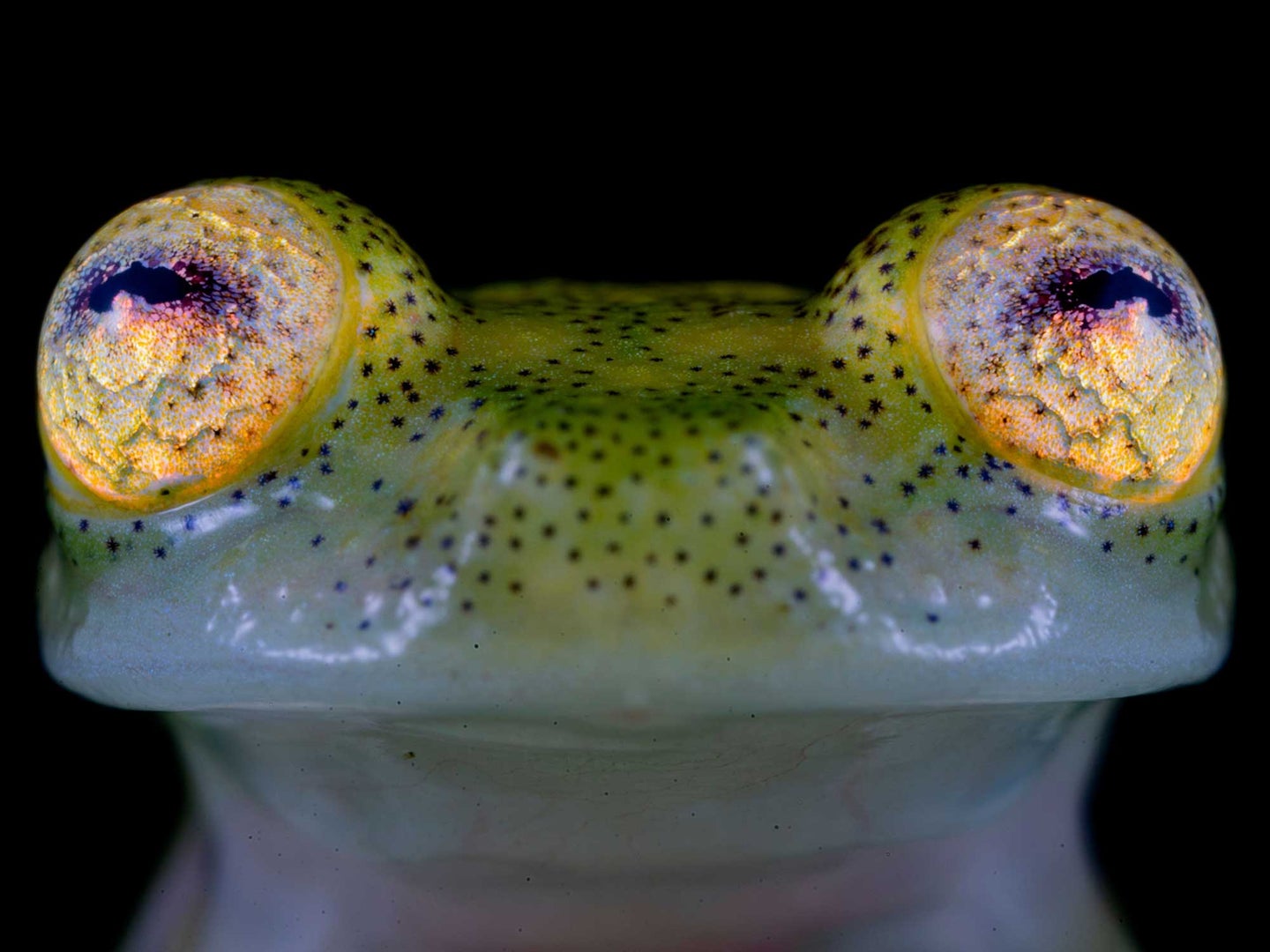 A group of crypto enthusiasts now have a newly discovered see-through frog from Ecuador named after them. Nouns DAO, a decentralized autonomous organization (DAO) that uses the Ethereum blockchain, earned the right to name a new glass frog species after funding the Rainforest Trust’s conservation efforts in the amphibian’s native habitat.

But the significant carbon footprint of cryptocurrency mining calls into question the real impact that crypto initiatives—even those that may be conservation-minded—can have on the environment. The crypto mining industry already has a carbon footprint comparable to that of some countries, an impact that is expected to grow if no action is taken.

“Having creative solutions for conservation is really important, especially nowadays,” says Rebecca Brunner, a University of California Berkeley biologist who helped describe the new glass frog. “I’m very thankful for Nouns DAO for doing this, but I really hope that if crypto continues to be a phenomenon, that it is re-evaluated in the context of climate change and conservation.”

Crypto donations that fund environmental causes are simultaneously using a mechanism that consumes an enormous amount of energy and produces tons of e-waste, only pushing our climate goals further out of reach. DAOs are crypto communities built on blockchain technology that form for a common mission and are governed by its members. The members pool their crypto assets together and vote on how to use them. One of the most famous examples is the now defunct Constitution DAO, which attempted to purchase an original copy of the US Constitution but ultimately failed.

Nouns DAO is made up of people who own Noun NFTs. NFTs, or non-fungible tokens, are unique and unreplicable digital assets that are bought and sold online, mostly with the cryptocurrency Ethereum. These transactions are recorded on the blockchain, which serves as an online ledger. Each digital asset is almost invariably tied to some other asset that most of the time lives off blockchain. In the case of Nouns DAO, a new NFT is auctioned every 24 hours and each NFT is equal to one vote. For the proposal to pool funds to name the new species of glass frog, 27 members voted for and eight voted against.

The new species, Hyalinobatrachium nouns, is one of more than 100 glass frog species on Earth. Its skin is transparent with a yellowish-green tint, which makes its inner workings, including its red heart, visible. This see-through characteristic provides a camouflage advantage that can aid in the species’ survival.

Ecuadorian biologist Juan Manuel Guayasamin first spotted H. nouns sitting on a leaf over a stream while he was on an expedition in the Tropical Andes in 2012. He initially thought it was a previously identified species and didn’t confirm that it was in fact a new species until genetic work revealed significant differences in its DNA. The findings were published this March in the journal PeerJ, along with the description of another glass frog species that Brunner discovered in the same region.

The Tropical Andes, a region ripe with undiscovered plants and animals, has enticed biologists from around the world, and is now attracting eyes from within the crypto community as well. For nearly a decade, the Rainforest Trust and its Ecuadorian partner Fundacion Ecominga have been working together to preserve natural habitat in the Tropical Andes, focusing their efforts on the Choco bioregion, where recent expeditions have discovered several new species, including H. nouns.

The two nonprofits decided to use the naming of this frog as a fundraiser opportunity, a strategy that they, as well as other conservation groups, have used in the past. But this is the first time a DAO has purchased the right to name a species.

“We’re very reluctant to be seen as promoters of cryptocurrency,” says James Deutsch, CEO of the Rainforest Trust. “We certainly do worry about the energy cost of cryptocurrencies and of Bitcoin in particular.”

Deutsch notes that the Rainforest Trust decided to accept the offer because Nouns DAO runs on the less energy-intensive Ethereum rather than Bitcoin, and that the donation was made in dollars rather than cryptocurrency. The Nouns DAO member who offered the donation is also a Rainforest Trust board member, another reason the organization decided to wander into this “gray area,” Deutsch says.

The energy consumption of Bitcoin, which uses the proof-of-work mechanism, is comparable to that of the entire country of Thailand. Proof-of-work is the primary way of validating monetary transactions and generating new coins in the decentralized system. The reason it’s so energy-intensive is because it involves high-capacity computers competing against each other in a global guessing game. Finding the correct number gets more difficult with time, thus requiring more computing power if the user wants to be the one to get it first. To increase their chance of winning, an individual needs to enter more machines into the game. This has resulted in giant data centers filled with computers dedicated to crypto mining that run on cheap energy.

Ethereum also functions on proof-of-work. Its environmental impact is about half of Bitcoin’s, but it still has a carbon footprint comparable to that of Libya. The cryptocurrency was expected to shift to a more sustainable mechanism called proof-of-stake this June, a move that would cut its energy consumption by 99 percent by getting rid of the competition factor. But Ethereum core developer Tim Beiko recently said it’ll take a few additional months with no definitive date. Ethereum has been promising to switch to proof-of-stake since 2014.

“Nobody should believe that Ethereum is proof-of-stake until it actually is off proof-of-work entirely,” says David Gerard, crypto writer and author of Attack of the 50 Foot Blockchain. “I’ll believe it when it happens and not a moment before.”

Gerard says although he believes proof-of-work mining to be a “crime against humanity,” he can understand why charities continue to accept funding from crypto initiatives, as “funding is desperate by definition.” Some charities, however, have decided to cut ties with crypto. The Mozilla Foundation is no longer accepting proof-of-work cryptocurrencies. Wikimedia Foundation is also reconsidering its relationship with crypto funding.

Howson also warns of the greenwashing that comes with crypto’s involvement in the environmental sphere. NFTs have been trying to connect themselves to environmental aims, but the integrity of these efforts are still questionable. In some cases, it may be more of a strategy to pump the token’s value, Howson says.

In terms of whether crypto can truly be “green,” there are potential scenarios. Some crypto initiatives out there run on “sidechains” rather than the main blockchain, which means they do not require mechanisms like proof-of-work or proof-of-stake. But these applications have not attracted a huge following. Another potential scenario is if the two main cryptocurrencies, Bitcoin and Ethereum, actually made the transition to a mechanism that is not proof-of-work.

Some recent crypto conservation projects, such as Black Rhino’s Early Adopters NFT and Outside’s Outerverse Passport NFT, have found a home in the Solana blockchain, which runs on a hybrid of proof-of-stake and proof-of-history, suggesting a smaller carbon footprint. But this doesn’t resolve the issue that the vast majority of crypto transactions still take place on Bitcoin and Ethereum.

The irony intertwined in Nouns DAO’s conservation funds is just one example of the many ways that crypto enthusiasts are attempting to coalesce their passion projects with conservation aims. But as of now, the reality is that Bitcoin dominates the crypto mining industry and Ethereum serves as the backbone of most of the NFT market. Both cryptocurrencies run on proof-of-work. This means that conservation nonprofits will have to make a choice on whether to blacklist an industry that, on the one hand holds enormous wealth, but on the other contributes to significant environmental harm.

“I am impressed that this group of very energetic, creative, and wealthy people have taken the NFT art concept and used it specifically for charitable purposes,” Deutsch says. “But having said all that, it still wouldn’t justify buying into something that was inherently destructive.”