These tiny creates pack a punch much stronger than other creatures their size. 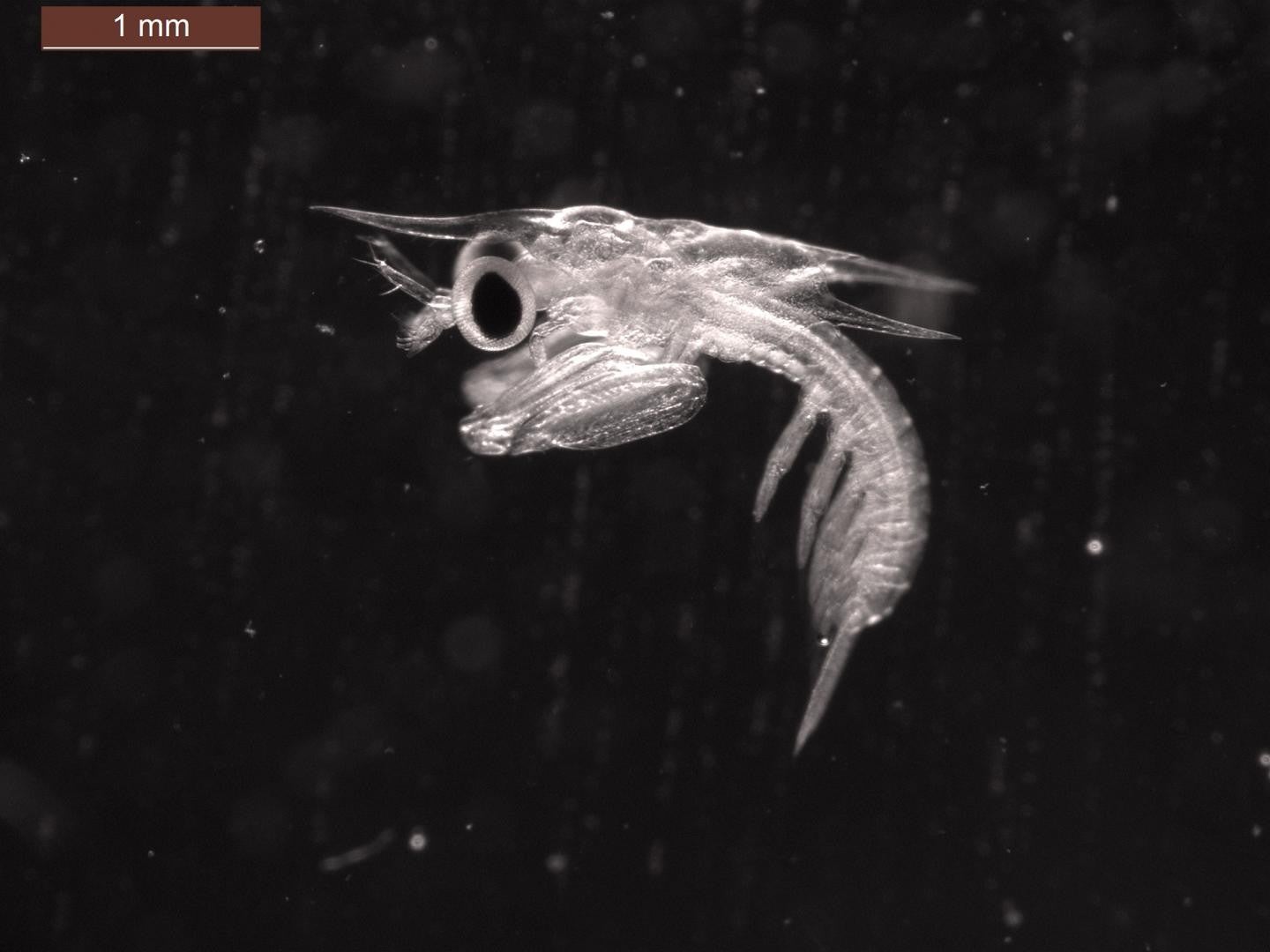 Baby mantis shrimp are about the size of a grain of rice, and they punch at speeds five to ten times faster than the overall punching speeds of other comparably-sized species.
SHARE

Mantis shrimp, a diverse group of predatory crustaceans with famously kooky eyeballs that move independently, can be found all over the world. But the various species all have something in common: They pack a pretty gnarly punch. In fact, mantis shrimp are known to produce some of the fastest limb movements ever recorded, at a hair-whooshing speed of around 50 miles per hour. In a new study published on April 29 in The Journal of Experimental Biology, a team of researchers examined this striking ability in tiny larval mantis shrimp, which are no larger than a grain of rice.

With this research, says Harrison, the team was interested in figuring out when this ability first appears in mantis shrimp, and if baby mantis shrimp can strike faster than their adult counterparts. Current mathematical models suggest that smaller organisms should produce faster accelerations. The team also wanted to know how the larval shrimp’s “strike” speed compares to the speeds at which other, similarly-sized creatures can move.

To wind up their “punch,” mantis shrimp use a mechanism known as latch-mediated spring actuation, a process in which energy stored in a spring gets released. Think about what happens in archery, says coauthor Sheila Patek, a biology professor at Duke University. “You could use your arm to throw an arrow, but it wouldn’t go very fast,” Patek says. “However, if you use your arm muscle to put energy into the deformation of the bow, you can store up a lot of energy in the material.” Released with a latch (in this case, your fingers), the energy from the bow launches the arrow. For mantis shrimp, it’s a similar process—when their “latch” muscles relax, just like when your fingers relax on a bow, it allows for stored-up energy to release and propel their forelimb forward.

All mantis shrimp species use this system, but in different ways. Some species are known, delightfully, as “smashers”—they live underneath rocks in coral habitats, foraging for hard-shelled prey like snails and then smashing them open with a hammer-shaped appendage. Others are called “spearers,” tending to burrow into the ground and ambush fish and squid with a kind of built-in spear. Before all of this, however, they each go through various larval stages, at one point floating up to the open ocean to live briefly as see-through plankton before floating back down and into adulthood.

Harrison, who led this study as a part of his PhD research, collected an egg clutch from a female Philippine mantis shrimp, or Gonodactylaceus falcatus, living in the wild on the island of  Oahu in Hawaii. He raised the tiny shrimp in the lab, rearing the eggs on a speed shaker table to keep the water in motion, kind of like a mantis shrimp bassinet.

The researchers found that at the fourth larval stage—when the mantis shrimp larvae float up and become plankton—“that’s when we first started seeing this [punching] behavior,” says Harrison. It was particularly exciting for the researchers that, because the animals were completely transparent at this stage, “you can see all the muscles contracting, and you can see all the mechanisms working.” But capturing this incredibly tiny detail on camera, even using the most advanced technologies, was a challenge, he added. Eventually, they had to glue individuals to a toothpick and poke at them with another, eliciting a defensive punch.

The study’s findings suggest that while the larval strikes were fast—at an average of about 0.9 miles per hour—they were not faster than the adults, as anticipated. “These are incredibly high speeds and accelerations for such a tiny organism, but still not quite as high as you might expect,” says Harrison. They were, however, five to ten times faster than the overall speeds of other comparably-sized species. If these baby mantis shrimp were considerably out-punching their prey, Harrison speculates, “it might be that there’s no selective pressure to get faster.”

It’s also always possible, he says, that in a natural setting and under different circumstances—say, if the larval mantis shrimp were using aggressive strikes, as opposed to defensive ones—they might move at higher speeds.

“This is a very cool study,” wrote Andy Suarez, a professor of integrative biology at the University of Illinois who was not involved in the research, in an email to Popular Science. “Almost everything we know about these stored energy mechanisms in animals comes from the adults of a few species. This study adds to that knowledge by examining a spring loaded system in the juveniles of mantis shrimp, which are much smaller.” Suarez also noted that the study’s findings can help engineers design things like micro-sized high-speed robots or surgical tools.

“This is a really interesting area for understanding how materials can generate extremely fast movements,” says Patek, “and how animals circumvent physical limits.”