How the world's only known white gorilla came to be. 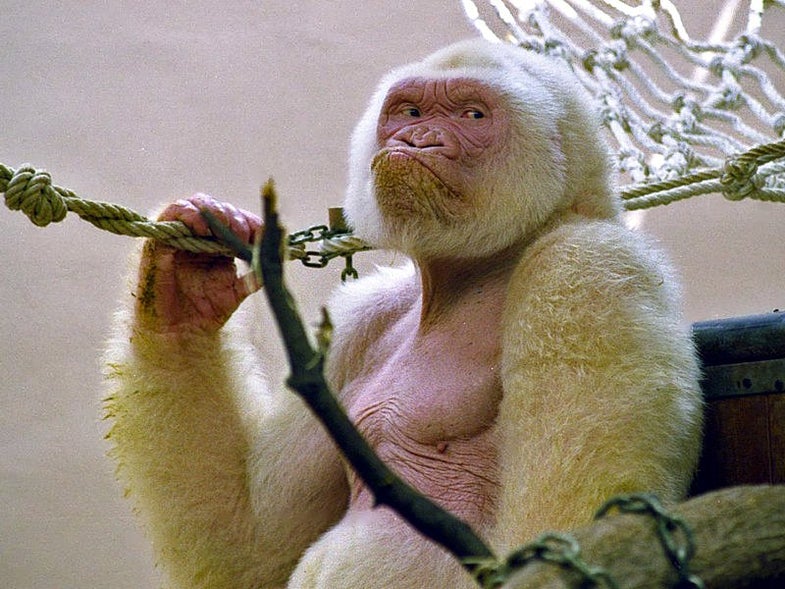 Snowflake, the long-lived gorilla who died in 2003, was famous for being the only known albino gorilla. He became a wildly popular attraction at the Barcelona Zoo in Spain, where he lived almost his entire life, becoming almost a mascot for the city. But until now, nobody knew why Snowflake looked the way he did.

Snowflake was a western lowland gorilla–the smallest subspecies of gorilla. It’s not the rarest subspecies, but no gorilla subspecies are particularly healthy; the western lowland gorilla is listed as critically endangered. But it’s the most common to be found in zoos, and in 2012, its genome was sequenced. That’s what finally enabled researchers at the University of Pompeu Fabra to figure out what made Snowflake so unusual.

Albinism is caused a genetic mutation; there are four specific ones in humans. Things don’t work quite the same way in gorillas, but albinism in other animals, like mice, is fairly well-understood. Using a vial of frozen blood taken from Snowflake before he died, the researchers were able to sequence his genome and compare it with a non-albino gorilla genome. Then they could search for any of the other mutations known to cause albinism in animals.

The researchers pinned Snowflake’s albinism down to a single gene: SLC45A2. The gorilla inherited the mutation from his parents–but why only Snowflake? The genome sequencing also revealed that Snowflake had large stretches of inherited genes from his mother and father that were identical–in fact, his mother and father shared 12 percent of their DNA, which indicates that they were uncle and niece.

Western lowland gorillas don’t normally struggle with inbreeding, but as their population decreases and their habitat is destroyed, it’s increasingly becoming a problem. Snowflake appears to be the result of that–though he lived a long and healthy life, fathering six children to adulthood and living to the ripe old age of 40 (western lowland gorillas usually only live to about 25).