Let An Avatar Teach You How To Lose Weight

In a small study, women who watched virtual representations of themselves exercise ended up exercising more in real-life, too. 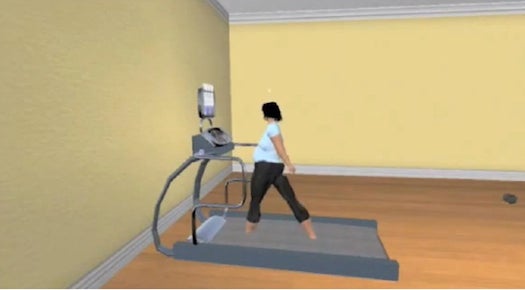 It sounds pretty silly, but a new study suggests that watching virtual people work out could help you shed a few pounds.

In psychology, there’s something called “social cognitive theory.” Part of that theory is the idea that when good things happen to people because they behaved a certain way, observers are more likely to imitate that behavior, especially if the observer and the observed look alike. Seeing your twin sibling shoot hoops? Probably helpful. Watching NBA stars do it? Maybe not so much.

A study recently published in the Journal of Diabetes Science and Technology examined how that effect relates to weight loss–but used virtual people in place of real ones.

The team of researchers made an avatar that looked similar to each woman in a group of eight. After that, the researchers had the women make a weekly clinic visit, where they watched a video of their avatar making healthy choices. One week the women saw the virtual person choosing the right portion size; another week the well-disciplined virtual person walked at an appropriate speed across a treadmill. After four weeks, the eight women lost a modest average of 3.5 pounds, which is about what you’d expect when adhering to standard dieting practices. Three and a half pounds might not sound that impressive, but the process could lead to more weight loss, larger studies have shown.

Back in 2009, a Stanford team conducted a series of studies, including a very similar, albeit shorter, study that showed how a virtual representation of someone on a treadmill could encourage people to lose weight.

This latest study was conducted over four weeks instead of the Stanford study’s single day, and included a different demographic than students, which the Stanford team looked at. Still, eight women is a tiny amount for a study, so it might not be prudent just yet to dress a Sims character in your clothes and watch them go for a jog.