How Did This Wolf Get To An Isolated Chain Of Islands? 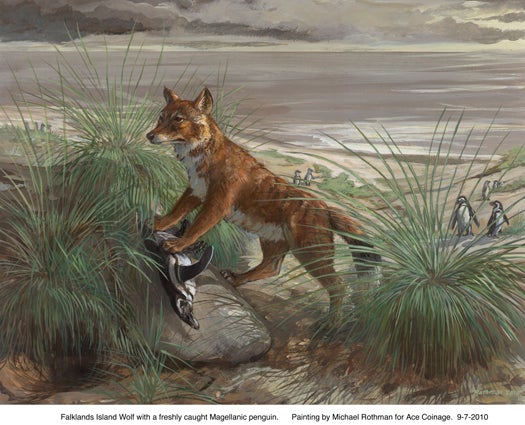 In 1690, British explorers at the Falkland Islands questioned how a wolf made its way almost 300 miles from the Argentinian shore to the isolated islands. In 1834, on his famous Beagle voyage, Charles Darwin asked the same question. Now a team of researchers say they’ve figured out how the now-extinct species managed the trip: it skated over.

To figure it out, a University of Adelaide team did some DNA digging. First they tested tissue samples from the skull of a wolf Darwin himself (!) collected and samples from a recently uncovered wolf specimen in New Zealand. They also looked at six specimens from a related species–the almost-wolf Dusicyon avus–to determine when, exactly, the Falkland wolf diverged genetically. DNA testing seemed to show the two split ways about 16,000 years ago.

Other studies that relied on museum specimens, the researchers say, didn’t use Dusicyon avus, and suggested the Falkland wolf diverged millions of years ago, colonizing the islands about 330,000 years ago. That opened up the mystery to interpretation: Did humans bring it over? Did it make a raft or something? Did it, like, swim?

Researchers had a little epiphany looking at submarine terraces, which showed that the Last Glacial Maximum–a climate period characterized by low sea levels about 18,000-plus years ago–could’ve provided the perfect route for the wolves to cross. A narrow strait was formed during the time, and the wolves could’ve made their way over while chasing after food. No cute little wolf ice skates, unfortunately, but still pretty amazing.