The Science Of Soda Sizes

Some fun reading about how, psychologically, New York's proposed soda ban was supposed to work 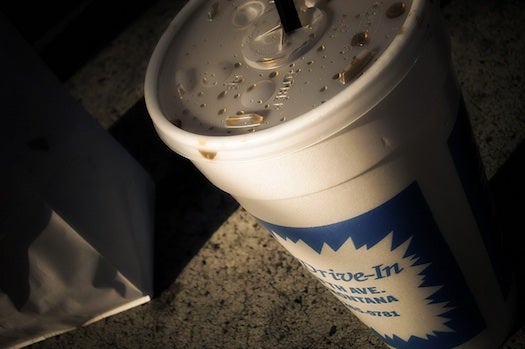 As we either celebrate or mourn the New York Supreme Court’s striking down of the soda size limit in New York City, let’s take a moment to look at the psychology of portion sizes, which is truly weird.

An overwhelming number of studies shows that people seem to base how much they eat on the amount of food or drink they’re given, not how full they actually are. And portion sizes, of course, have increased dramatically over the past few decades.

In 2006, the Centers for Disease Control and Prevention published a document about research into portion sizes. Experiments with mac and cheese, sandwiches, pasta entrees, potato chip bags, bags of popcorn and other food all showed that people ate more when given more.

Often, people reported feeling just as full whether they ate smaller or larger portions. In the potato chip study, people didn’t adjust their intake at dinner after eating a larger bag of chips.

The New Yorker covered more studies into the psychology of choice last August. (I recall anti-ban petitioners wandering the sticky-hot New York City parks around that time, asking passersby their opinions on the ban. Shake Shack patrons seemed to be opposed.)

People also tend to take more when they know a bigger option exists, the New Yorker reported. It’s as if knowing a super size exists, even if you don’t choose it, makes that large frappe seem reasonable.

There’s still an open question on whether, scientifically, a soda size limit would work to reduce obesity rates and the financial and health costs of obesity.

Whether Americans sustain their responses to increased portion sizes over weeks and months and years hasn’t been studied, the Centers for Disease Control and Prevention pointed out.

And how much sugary drinks contribute to obesity by themselves is uncertain. Slate’s Dan Engber–also a contributor to this publication–analyzed the science of linking sweet drinks to weight gain and found that the studies are unsure. Then again, the most unsure studies were supported by grants from the beverage industry.