Before becoming Britain's first (and only) female prime minister, Thatcher graduated from Oxford with a chemistry degree. 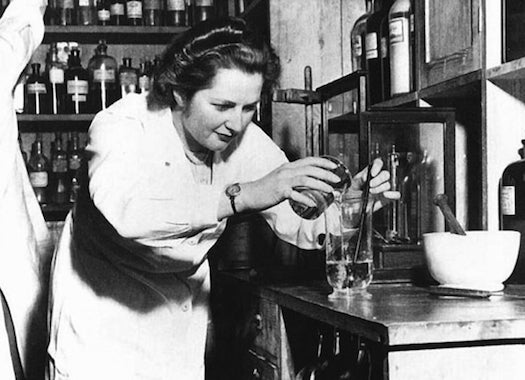 Margaret Thatcher died today at 87. She’ll be remembered as the first (and only) woman to be prime minister of Britain, but what’s often missed or only glanced over in her biographies, and now her obituaries, is her career as a chemist.

Thatcher graduated from Oxford in 1947 with an undergraduate degree in chemistry. Her fourth-year dissertation was on X-ray crystallography of the antibiotic cocktail gramicidin, and her supervisor, Dorothy Hodgkin, was working at the time on the structure of penicillin. In the years after, Thatcher worked as an industrial chemist at British Xylonite Plastics and at Lyons, with a probably apocryphal story circulating that she helped produce a form of soft-scoop ice cream.

It’s seldom discussed how much her degree might’ve affected her politics. A paper by science and technology professor Jon Agar, written for Notes and Records of the Royal Society of London and published in 2010, took a look at that connection, first by examining her as a student:

All of her biographers agree that the future Mrs Thatcher devoted her free time to politics rather than science, and even regretted her choice of undergraduate study. One repeated anecdote has her walking with a friend at graduation in 1947 saying, ‘You know, I oughtn’t to have read chemistry. I should have read law. That’s what I need for politics. I shall have to go and read law now.’ Another repeatedly recalled incident, at an unspecified date, but presumably during her undergraduate years, was a conversation between the young scientist and Norman Winning, the Recorder, or municipal clerk, of her hometown, who had a Cambridge natural sciences degree. Winning advised her to continue with chemistry as a means to getting into law as a patent lawyer. All these anecdotes serve to prepare the narrative for the next stage in Thatcher’s career, her training and employment as a lawyer in the later 1950s.

But instead Thatcher took a position at British Xylonite (BX) Plastics in 1947, Agar writes. It’s not clear exactly what her work entailed, but she, perhaps unexpectedly, joined a union there. In 1949, after gaining an opportunity as a parliamentary candidate, Thatcher became a food research chemist at “the cakes and teashop business J. Lyons & Co.” She likely researched the chemical process saponification, but not much else can be confirmed about her work there.

By 1951, Thactcher resigned from Lyons and switched career paths, studying tax law and passing the Bar in 1953. In 1959, she won a seat in Parliament.

The popular theory, then, is that Thatcher studying chemistry was “incidental,” Agar writes. It kept the lights on while she pursued politics. He quotes journalist Hugo Young’s summary:

These two jobs, lasting barely three years in all, constitute the totality of Margaret Thatcher’s first-hand contact with the world of commerce and industry. . . . In any case, prime minister Thatcher never tried to make political capital out of these fugitive involvements. They were incidental to her political ambition and she has never pretended otherwise. They made her a living, while she devoted most of her psychic energy to the greater and more glamorous task.

But that doesn’t mean her career as a chemist and politician never intertwined, Agar argues. In 1971, Lord Victor Rothschild proposed laws to make government funding of science closer to a business proposition: policy would be shaped by market forces. “Basic” research science (or just “cheap” science) wouldn’t be affected, but other research would. Thatcher, then Education Secretary, strangely seemed to shift positions in a decisive meeting on the subject, ultimately agreeing that the market should play a role in government funding of science.

It was a controversial decision–121 scientists and doctors signed letters of protest to _The Times_–but Agar marks this as a defining moment, when Thatcher’s hard-line conservative policies first took shape. It wasn’t a coincidence that the battle was fought over science, either, Agar writes: “it was precisely because Thatcher knew what scientific research was like that made her impervious to claims that science was a special case, with special features and incapable of being understood by outsiders, and therefore that science policy should be left in the hands of scientists. Such a strategy of persuasion and protection might have considerable purchase on a science minister with no direct experience of the working life of a scientist, but not Thatcher.”

Agar sees that moment as the beginning of a slope toward more conservative policies. In effect, she used her chemistry background to test the political water: if she could pull off policies like that in the science sector, she could do it in other sectors, too. Agar writes that Thatcher was fond of this quote, about Prime Minister William Ewart Gladstone and the physicist Michael Faraday: ‘When Gladstone met Michael Faraday, he asked him whether his work on electricity would be of any use. “Yes, sir”, remarked Faraday with prescience. “One day you will tax it.”‘