More Evidence Emerges That “Hobbits” Were A Separate Species

It's all in the wrist. 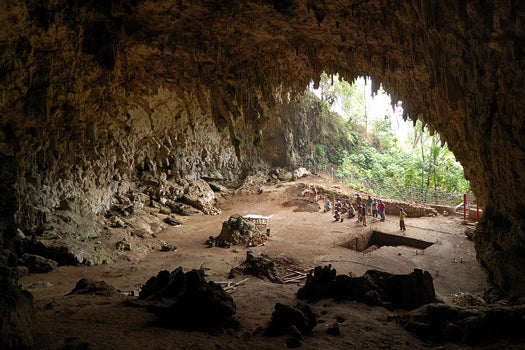 While film buffs have been arguing over the need to make The Hobbit into three different films, anthropologists have been busy debating the origins of real hobbits, whose remains were discovered in Indonesia only a decade ago.

In 2003, researchers uncovered 18,000-year-old bones of a woman with a skull a third of the size of a human’s on the island of Flores, Indonesia. They subsequently found more remains belonging to up to nine similarly pint-sized prehistoric creatures. Nicknamed after the the J.R.R. Tolkien characters, they stood some 3 and a half feet tall.

The origin of these hobbits has been controversial, as claiming they are a different kind of hominid closer to Homo erectus than Homo sapiens throws a wrench in many established theories of human evolution. But Frodo fans can delight in new evidence that hobbits did in fact belong to the extinct species Homo floresiensis.

A study published in Journal of Human Evolution last week shows hobbit wrists were markedly different from humans’, lending credence to the theory that they were a separate species from Homo sapiens. After studying the differences between the carpal bones of the Homo floresiensis remains discovered in 2004 and modern human and Neanderthal wrists, scientists says that hobbits weren’t just abnormally small humans.

Being different comes at a price, though. Because hobbit wrists weren’t well shaped to bear loads equally on both sides of the arm, hobbits probably couldn’t grip very well, or at least were subject to more frequent fractures and arthritis. Although researchers have exacted basic stone cutting tools from up to 800,000 years ago on Flores, the structure of their wrists probably restricted hobbits’ ability to make and use tools.

Hobbits reached Indonesia by 1 million years ago, and went extinct 17,000 years ago. Some researchers contend that rather than being a separate species, hobbits were deformed humans with a developmental disorder that would account for their small stature and brain.