Two of the three judges are also scientists 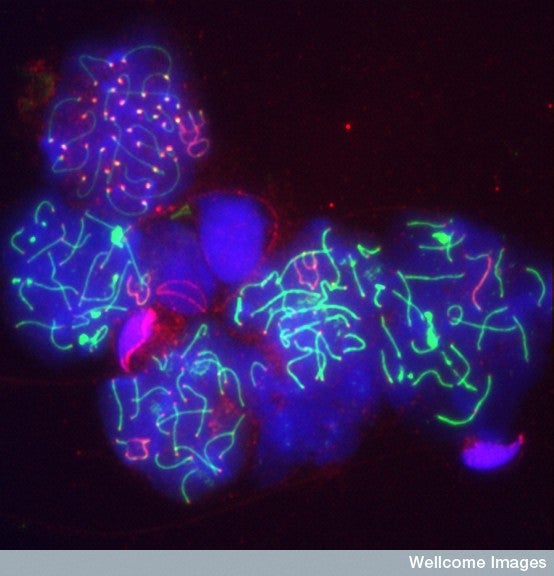 B0006439 Meiosis Credit: MRC NIMR. Wellcome Images images@wellcome.ac.uk http://images.wellcome.ac.uk Five mouse nuclei showing chromosomes at the pachytene stage of meiosis. The green stain highlights the synaptonemal complex, a structure that holds the two chromosomes of a pair together prior to recombination. The blue stain shows the loosely condensed DNA. The red stain shows the tumour suppressor protein, BRCA1, binding to the sex chromosomes and to all the telomeres. The top left nucleus is at late pachytene when the synaptonemal complexes are beginning to break down and BRCA1 staining is very intense on the telomeres. BRCA1 is thought to be involved in inactivation of the X-chromosome during meiosis, DNA repair, and the regulation of cell division especially in cells lining the milk ducts in the breast. Mutations in the BRCA1 gene are associated with an increased risk of breast, ovarian, prostate and colon cancer. Confocal micrograph 2004 Published: - Copyrighted work available under Creative Commons by-nc-nd 2.0 UK, see http://images.wellcome.ac.uk/indexplus/page/Prices.html. Wellcome Images
SHARE

In a victory for biotechnology companies, a federal appeals court ruled Friday that human genes can be patented. Odds are pretty good the case will make its way to the Supreme Court, and it’s possible the justices will rule the other way, so this is not a done deal — but until then, it seems companies can own the exclusive right to use human genes.

The case involved patents on two human genes that are used to predict breast cancer, BRCA1 and BRCA2. To study these genes, patients and scientists will again have to pay a fee — up to $3,000 — to the company that owns the patent, Myriad Genetics.

In a 2-1 ruling, the Court of Appeals for the Federal Circuit, which specializes in patent law, overturned an earlier decision that invalidated the patents. The decision is still somewhat unclear, however, with three separate opinions and a half-dozen points of law under debate. The lack of clarity, and the complex and controversial nature of the case, makes a hearing by the high court seem likely.

The court did rule against Myriad in one aspect, involving the process they use to analyze a patient’s genes. This requires “abstract mental steps,” the court said. So the court said the genes themselves could be patented, but a specific method of studying them could not.

“We strongly support the Court’s decision that isolated DNA and cDNA are patent-eligible material as both are new chemical matter with important utilities which can only exist as the product of human ingenuity,” said Peter Meldrum, president and CEO of Myriad Genetics. Scientists were not as pleased: “Genes or a sequence of the genome is a product of nature and should not be patentable,” said Dr. Timothy J. O’Leary, president of the Association for Molecular Pathology, which brought the lawsuit.

The U.S. Trademark and Patent Office has already issued patents on more than 4,000 human genes, so a ruling that would invalidate gene patents would have major implications for the biotech industry. Companies like Myriad argue patents are necessary to protect product development and encourage innovation; opponents argue the ruling will stifle competitive research and jeopardize patient health, and that it’s unethical to patent something that comes from nature. The Obama administration had filed a brief arguing that isolated genes should not be patented.

Patents on plant and even animal genes have not risen to this level of controversy. Genetically altered plants and animals are big business for biotech firms, which license their gene patents to other companies that produce seeds, additives and other products. About 20 percent of the human genome is also patented, including genes associated with diseases like Alzheimer’s. Other companies and researchers must pay fees to license the patent.

The court ruled that patents are allowed because once pieces of DNA are isolated from the body, their chemical structures differ from the DNA that exists inside the body — so they’re not actually products of nature. Two of the judges on the three-judge appellate panel are scientists, and brought their own analysis to the debate. Judge Alan D. Lourie, who as the Atlantic points out holds a PhD in chemistry, concluded thusly:

In this case, the claimed isolated DNA molecules do not exist as in nature within a physical mixture to be purified. They have to be chemically cleaved from their chemical combination with other genetic materials. In other words, in nature, isolated DNAs are covalently bonded to such other materials. Thus, when cleaved, an isolated DNA molecule is not a purified form of a natural material, but a distinct chemical entity. In fact, some forms of isolated DNA require no purification at all, because DNAs can be chemically synthesized directly as isolated molecules.

Judge Kimberly A. Moore, who has a degree in electrical engineering, also discussed the chemical makeup of the isolated DNA, but also said the new sequences have a utility that whole gene sequences do not — in this case, predicting breast cancer risk.

Judge William C. Bryson, who does not list any scientific background on his bio, was the sole dissenter, arguing that most people would argue patents are intended to protect inventions, and “a human gene is not an invention.”

Much legal wrangling remains to be done before this question is finally settled.

[via New York Times, The Atlantic]