Maybe not the 'toe of God' after all 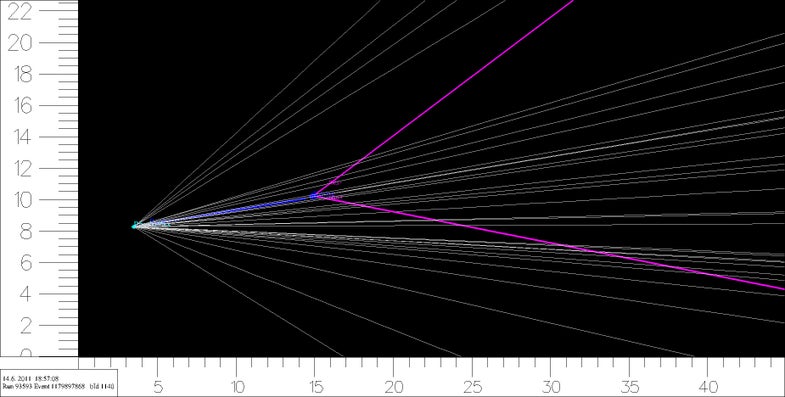 The purple tracks show the decay of a "strange beauty" B meson, composed of a beauty antiquark and a strange quark. The composite particle decays into a pair of muons. The LHCb experiment has been studying B mesons in extreme detail and so far has not found any evidence for supersymmetry, which is one theory that explains why the universe has more matter than antimatter. LHCb/CERN
SHARE

The latest news from the Large Hadron Collider: scientists still cannot explain why we’re all here. In the most detailed analysis of strange beauty particles — that’s what they’re really called — physicists cannot find supersymmetric particles, which are shadow partners for every known particle in the standard model of modern physics. This could mean that they don’t exist, which would be very interesting news indeed.

Physicists at CERN have been studying a class of particle called B mesons, which are heavy objects made up of two different quarks (one antimatter and one regular matter) that decay into other particles. Their heaviness gives them several decay options, which makes them useful for studying matter-antimatter asymmetry.

This asymmetry explains why everything exists — which, from a mathematical point of view, it should not. Equal amounts of matter and antimatter should have been created in the Big Bang, and the two types would have annihilated each other, leaving nothing behind. But somehow matter won out, meaning there was an imbalance between matter and antimatter at some point. Supersymmetry is one way to explain this. Supersymmetric particles, which have names like squarks and selectrons, exist for every particle and have slightly different characteristics than their counterparts.

Last year, physicists at the Tevatron said B mesons seemed to have had an affinity for becoming matter rather than antimatter. This decay preference suggested some other particle or force may be at work — a deviation from the standard model, possibly the work of supersymmetric particles.

But now the LHC data, which physicists say are more precise than Tevatron’s, does not show this matter-decay deviation. This, in turn, could mean there is no supersymmetry; no squarks or selectrons. We are not going to attempt to delve into the physics of this — check out the LHCb experiment and Quantum Diaries posts if you’re interested in the nuts and bolts.

This will be disappointing to some theorists, because supersymmetry provides a handy answer to many troubling physics questions. At high energies, it unifies electromagnetism with the weak and strong nuclear forces, and in some iterations, the theory provides a candidate for dark matter, in the form of a stable heavy particle like a neutralino. Supersymmetry is also an essential characteristic of string theory, which for now is the only widely accepted theory that unifies quantum mechanics and relativity.

In a story about this over at the BBC, Nobel Prize-winning physicist George Smoot called supersymmetry “an extremely beautiful model.”

“It’s got symmetry, it’s super and it’s been taught in Europe for decades as the correct model because it is so beautiful,” he said. “But there’s no experimental data to say that it is correct.”

So what does this mean? It’s not entirely over, as the BBC points out — there are a few versions of supersymmetry, which are more complex than the basic mass-energy level version that has apparently just been ruled out. So different flavors of supersymmetry could still be true. But it could also mean supersymmetry is just wrong, and if that’s the case, physicists will have to come up with some big new ideas.