In Flesh-Engineering Breakthrough, Lab-Grown Tissue Can Finally Grow Its Own Blood Vessels 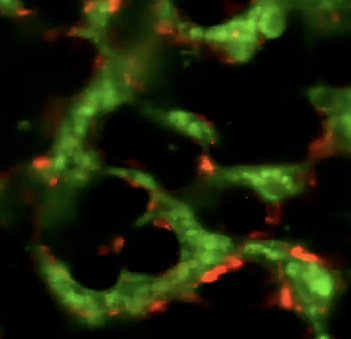 Tissue engineers have come a long way in recent years, fabricating human tissue Lego blocks, artificial kidney cells, sight-restoring bio-synthetic corneas and more. But no one has figured out how to grow large amounts of transplantable tissue in the lab, because it’s too difficult to keep it alive. Texas researchers may have an answer: Use a common laxative to grow some blood vessels.

Researchers from Rice University and Baylor College of Medicine grew a system of and capillaries on a nontoxic plastic matrix. They were able to control where cells grew in their plastic gel.

Previous attempts to grow blood vessels in artificial tissue have involved driving a nail into an electrically charged plastic block, which creates a feathery network of tubes that could become blood vessels or even nerve cells. Scientists can also construct the vessels themselves, but that’s a painstakingly slow process.

This breakthrough is important because without a blood supply, it’s impossible to grow a tissue structure thicker than a couple hundred microns, according to Jennifer West, chair of the bioengineering department at Rice. But tissue structures with a native blood supply could lead to new lab-grown tissue implants.

The new method involved polyethylene glycol, or PEG, a common ingredient in everything from laxatives and toothpaste to antifreeze and printer ink. The researchers modified PEG to resemble the body’s extracellular matrix, basically the a protein-sugar scaffold that makes up most tissue. They cultured some human umbilical cells and added growth factors derived from platelets, which would help promote blood vessel formation.

The team exposed their PEG to UV light, modifying it into a hydrogel, and then seeded it with the cells. They injected some fluorescent dye to watch what happened, and during 72 hours of filming, they watched their platelet plastic grow a series of tubules.

You can see the new vascular networks forming in this time-lapse video.

To test their new blood vessels, the team implanted the hydrogels onto mice corneas, which don’t have any vessels. They injected a dye and confirmed new capillaries had grown, and that blood was flowing through them.

The researchers plan to follow up with a technique that uses light to create detailed 3-D patterns, and grow blood vessels in specific patterns, according to Rice.