An artificial cornea can integrate with the human eye and regenerate nerve tissue, restoring sight to people with impaired vision,... 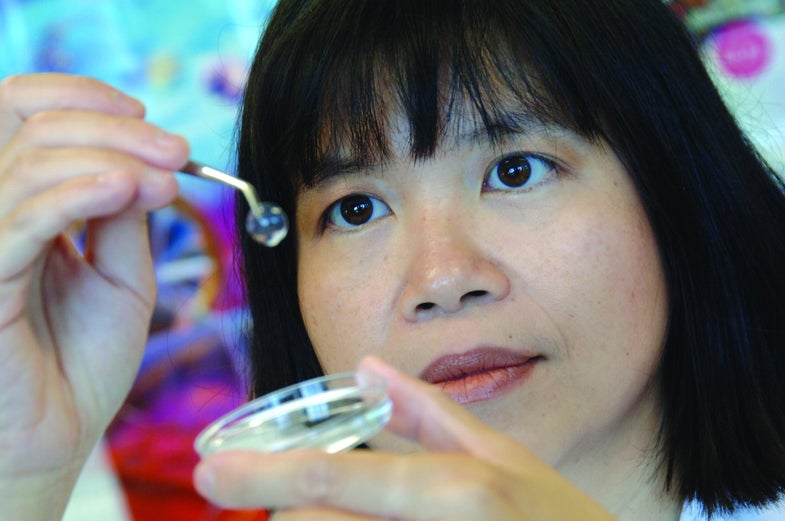 An artificial cornea can integrate with the human eye and regenerate nerve tissue, restoring sight to people with impaired vision, researchers announced today.

It’s the first study to show an artificially fabricated material can help regrow damaged eye tissue. The breakthrough could help millions of people worldwide who would otherwise have to rely on transplanted corneas from donors.

The study involved 10 Swedish patients with severe corneal scars. Researchers led by Dr. May Griffith of the Ottowa Hospital Research Institute removed damaged corneal tissue from one eye of each patient, replacing it with a bio-synthetic cornea made from recombinant human collagen.

During the next two years, cells and nerves from the patients’ own corneas grew into the implant, resulting in a regenerated cornea. Nerves that had been severed during surgery re-grew, and the hybrid corneas resembled normal, healthy corneas. Even better, the patients did not require any immune-suppression drugs, unlike with most transplants. Vision improved in six patients, was unchanged in two, and decreased in two.

The cornea is a thin, transparent layer of collagen that acts as a protective screen over the eyeball. It refracts light that passes through to the lens and ultimately the retina. Blame the cornea for your itchy contact lenses — nearsightedness, farsightedness and astigmatism are all corneal disorders, which affect about 120 million Americans. Corneal disorders are also a leading cause of blindness worldwide, according to the U.N. World Health Organization.

Corneal transplants are the most common method for treating corneal disorders; about 40,000 Americans receive transplants each year. Transplants are fraught with side effects, however, and they’re not as common in developing countries.

An Italian study published earlier this summer showed a patient’s own stem cells can be cultured in a lab to help re-grow damaged corneas. And some high-tech vision-improvement therapies use the cornea to improve retinal function, which is impaired in elderly people.

But fixing the complex cornea, let alone duplicating it, is extremely difficult: It has five layers and it has no blood supply, so it gets oxygen directly from the air, for instance.

Designing a cornea copy encouraged the patients’ bodies to to regrow some of this complex tissue on their own.

The study caps nearly 10 years of research by Griffith, of the Ottawa Hospital Research Institute, and her colleagues at the University of Ottawa and Linköping University in Sweden. Griffith worked with FibroGen Inc., a San Francisco-based outfit that developed a artificial collagen protein, to produce the synthetic corneas. Collagen is the cornea’s main ingredient, and FibroGen is the only company that makes a recombinant form of it.

Recombinant human collagen is a good replacement for naturally occurring human collagen because it doesn’t have the problems associated with donor tissue or animal collagen, Griffith says. And in countries without a developed donor network, it may be the only cure for corneal blindness.

“With further research, this approach could help restore sight to millions of people who are waiting for a donated human cornea for transplantation,” she says.