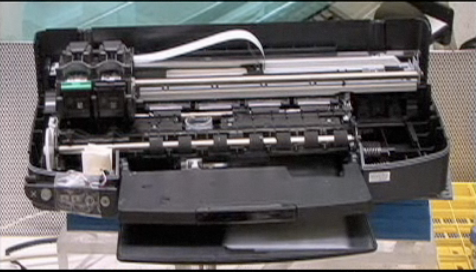 Updated: One of PopSci’s favorite regenerative medicine specialists, Anthony Atala, printed a biocompatible model of a human kidney on stage at the 2011 TED conference Thursday, in a technique that could someday be used to create new organs from a patient’s own tissue rather than relying on donated organs.

A few years ago, Atala figured out how to produce human tissue with a desktop inkjet printer, using cells as the printer ink. In a TED talk last year, he described printing heart valves and other tissues. This week at TED, he brought one of his patients on stage. When he was 10, Luke Massella was among the first people to receive a re-engineered organ — he was born with spina bifida and received a new bladder grown from his own tissue. Now he’s a healthy college student.

The organ-printing process employs scanners that collect a 3-D image of the organ that needs to be replaced. A small tissue sample seeds the printer, which replicates the tissue layer by layer to build a new organ, all in about six or seven hours. It would use the patient’s own tissue, so it avoids any organ rejection issues.

During Atala’s talk, a specially designed printer was about three hours into printing a kidney model built out of biocompatible materials. He also brought a completed model to show to the audience.

Initial reports suggested Atala had printed a working kidney, but it was actually a kidney-shaped mold with no internal structures or vasculature, according to Wake Forest University Baptist Medical Center, where Atala is a regenerative medicine specialist.

He said someday, scanners and printers could conceivably be used to treat wounds. A flatbed scanner could scan a patient’s wound, while a printer adds the right types of tissues to fill it back in. “You can print right on the patient,” Atala said, according to a report on the talk at Fast Company.

Atala also described using a patient’s failed organ as a scaffold for a new version, filling it with new tissue. This could help address the challenge of building blood vessels, which remains one of the greatest challenges in tissue engineering.

Atala said about 90 percent of people on organ transplant lists are waiting for kidneys, but donors are few and far between. Meanwhile, patients must undergo painful and complicated dialysis treatment. And mechanical replacements are still a few years away. Atala said regenerative medicine could one day solve the organ shortage crisis, replacing failing body parts on demand.

Correction: An earlier version of this post cited coverage by the Agence France-Presse newswire, among other sources, which incorrectly reported that Massella had received a printed kidney 10 years ago and that Atala printed a functional kidney onstage. In fact, Massella received a re-engineered bladder, and Atala printed a dummy kidney mold to demonstrate how the technique could provide transplantable organs someday.