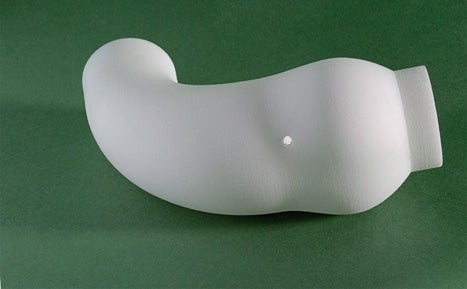 In 2000, Tal Golesworthy, a British engineer, was told that he suffers from Marfan syndrome, a disorder of the connective tissue that often causes rupturing of the aorta. The only solution then available was the pairing of a mechanical valve and a highly risky blood thinner. To an engineer like Golesworthy, that just wasn’t good enough. So he constructed his own implant that does the job better than the existing solution–and became the first patient to try it.

The existing fix, called the Bentall surgery, requires a five-hour invasive slice-and-dice and a heart-lung bypass, after which the damaged part of the aorta is cut out and replaced with a graft and mechanical valve. But Golesworthy saw an opportunity instead of despair: Nobody had thought to use more modern technologies, namely combining MRI tests with computer-aided design tools and new rapid prototyping techniques. Golesworthy saw a chance to create an implant that would support itself and reduce the chance of blood clots, thus eliminating the need to take that dangerous blood thinner.

In two years of work, Golesworthy discovered that the hardest part of creating this new implant wasn’t the actual design or construction–it was securing reliable measurements. The movement of the heart and other organs made it so different perspectives yielded totally different measurements. Luckily, the team figured out that a scan at one specific point in the cardiac cycle gave them the dimensions they needed.

The final product is constructed of polyethylene terephthalate, a standard medical plastic, and weighs less than 5g. It can be sutured directly into place by a surgeon at relatively low cost. The results speak for themselves: Golesworthy was the first recipient of his own creation, and since then, 23 others have taken the plunge, with more on the waiting list. Golesworthy sees this as not just a victory for Marfan sufferers, but a message to the medical community: “They are all biologists and medics, and they need process engineers,” he said. Golesworthy wants a greater collaboration amongst the medical community and engineers, who could see solutions the doctors and biologists can’t. Hopefully the medical community is listening–he’s his own proof, after all.

[The Engineer via Boing Boing]