His sensors could help automate everything from therapy to police work 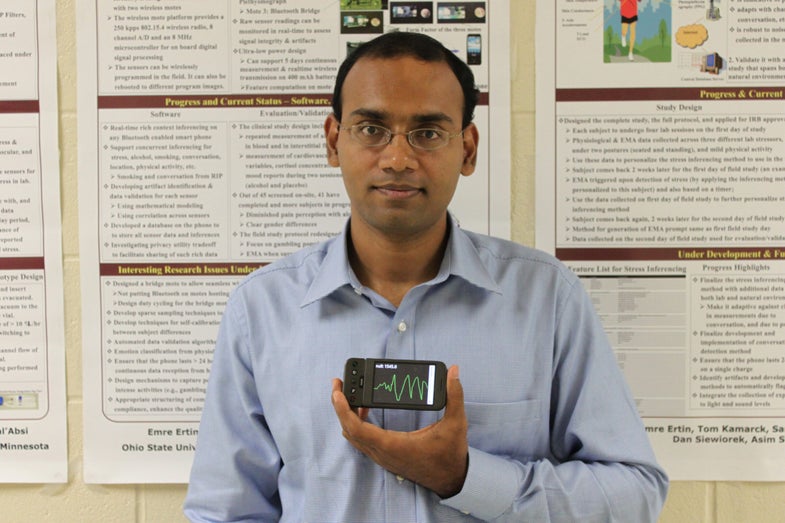 Ten years ago, even though he was on the fast track at Siemens in India, Santosh Kumar abruptly quit. Coming up with code for telecom switches was not how he wanted to spend his life. Instead he moved to the U.S. to pursue a Ph.D. in computer science. He had an idea for inexpensive, low-power wireless sensor technology and how it might solve serious real-world problems. His leap paid off. Now a professor at the University of Memphis, he develops tracking systems that can foil robbers and might even help cure drug addiction.

His AutoWitness system, made up of a playing-card-size sensor and a remote
server, tracks stolen property using cellular signals and inexpensive components. Most tracking systems stay connected over a satellite network, which makes them battery- intensive, conspicuous and prone to signal loss. Kumar’s device consists of a small circuit board, a $1 wireless sensor, an accelerometer, a gyroscope, a GSM radio and some very clever software.

Affixed to a TV or a priceless painting, it first detects motion (the software can recognize the difference between theft and just rearranging the living room). If the stolen item winds up in a car, the sensors periodically report data about the car’s motion over a cellular network to a remote server, along with the signal’s geographic coordinates. The server then text-messages the car’s last known location to the police. Impressed with the system’s ease of use and cost-effectiveness, the police departments in Memphis and nearby Jackson, Tennessee, have asked Kumar for AutoWitness units to test this fall.

His latest invention is AutoSense, a system, worn under clothing, for remotely monitoring stress levels. AutoSense uses a chest band and an armband to track respiration, heart rate and blood pressure, and features an activity monitor. Software loaded onto a smartphone analyzes the data to reveal when an addict in treatment, for instance, is indoors, outdoors, speaking or smoking. Equipped with that information, the software can identify stress and self-destructive behavior and anticipate when the addict is about to relapse, alerting him—or his therapist—to his increased susceptibility.

AutoWitness and AutoSense could one day supply information to law-enforcement officials and health-care providers that today requires a tremendous amount of labor to obtain. Meanwhile, Kumar is already starting to think about his next project: reducing the stress drivers experience in traffic.