Greening the world’s most iconic skyscraper 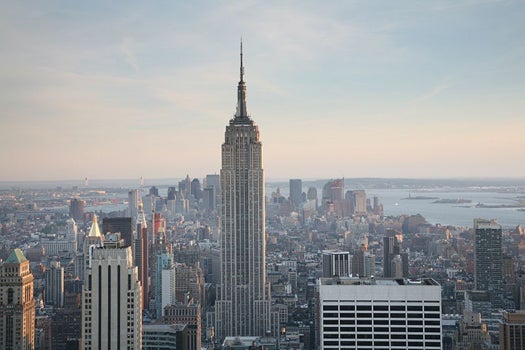 The Empire State Building, arguably the world’s most famous office tower, is 1,472 vertical feet of historic American real estate. It also contains 2.8 million square feet of office space, constructed to the energy efficiency standards of the early 1930s. So when Anthony Malkin took over management of the building several years ago, he also inherited an $11 million annual energy bill and a problem: How could he turn the iconic but aging building into a 21st-century office tower?

Now, a sweeping $13.4 million energy retrofit is slashing the Empire State Building’s energy consumption by nearly 40 percent and reducing greenhouse gas emissions by 105,000 metric tons over the next 15 years while trimming $4.4 million from annual energy costs. We took a firsthand look at what such a massive and meaningful project looks like, starting in a nondescript corner of the fifth floor where the Empire State Building is turning two-decade-old glass into future dollars.

It’s here that 100 double-pane windows per day are ripped from their aging frames, put through a rigorous cleaning process, treated with a thin UV-resistant film, and pumped full of pressurized argon and krypton gasses that improve their insulation values. By the time the retrofit is complete, all 6,514 windows will have been refurbished at a cost of about $700 per window. The cost to replace the windows with brand new equivalent glass would be more like $2,500 per window.

The window rehab – and other projects like it – reduces the energy load on the building, which in turn allows the engineers behind the retrofit to find efficiencies elsewhere. It’s all part of an 8-point plan that will eventually reduce the building’s energy consumption by 38.4 percent and its expenses by a few million dollars each year. With a footprint the size of the Empire State Building’s, that’s game-changing not just for the building, but also for the city and the world.

The Empire State Building fell into that energy-sucking 20 percent, so perhaps it was no surprise that the Clinton Climate Initiative took an interest in the building. In 2007, a representative for CCI approached Malkin seeking a building in which to demonstrate the foundation’s green retrofit program. Malkin was in the midst of a massive renovation project spanning his company’s entire portfolio, so he offered up a building at Broadway and 35th street in Midtown Manhattan.

The CCI pressed for something bigger. If it could turn the world-renowned Empire State into a model for efficiency, the whole world would take notice. At the time, the Empire State Building consumed the same amount of energy as 40,000 single-family homes, a figure that is unfortunately not unique; 43 percent of office space in New York City was constructed before the end of World War II, much of it comprising that 20 percent of buildings consuming the majority of the city’s energy. Greening the Empire State Building and skyscrapers like it wouldn’t just benefit real estate owners and their tenants; it would significantly move the dial on the entire city’s energy consumption.

Malkin agreed for reasons both altruistic and self-interested. “This is all about making money,” Malkin says bluntly of the retrofit. “To me, the whole concept of ‘green’ is a misnomer. The world is getting greenwashed. If you can’t prove it economically, it doesn’t matter.”

Malkin and the CCI set out to prove not only that enhanced energy efficiency is a cost-effective means of controlling expenses, but to create an economically feasible model that can be implemented by any building anywhere.

“If we succeeded only at the Empire State Building, we failed,” Malkin says. “It had to be broadly adoptable and malleable, and it had to be quantitative.”

To create a cost-effective retrofit regimen, the project would have to be carefully managed. Malkin and the Empire State Building brought in technology and management experts from Johnson Controls and real estate consultants Jones Lang Lasalle, as well as the green-thinkers at the Rocky Mountain Institute, to craft a suite of technologies that not only incrementally reduce energy consumption but that have a multiplying effect on one another that generates further efficiency.

For Paul Rode, business development director for building efficiency at Johnson Controls, this synergistic effect was crucial. The retrofit team considered more than 60 off-the-shelf technologies and practices. They came up with eight initiatives that together were more effective than the sum of their parts. “If we take any one of these items out, the overall reduction values of the others change disproportionately,” he says.

The technology package attacks the problem from three sides. First, the team found ways to reduce the existing load on the building’s infrastructure by rehabbing the windows, installing better insulation behind the more than 6,500 radiators in the building and outfitting offices with occupancy sensors, better lighting controls, and layouts that maximize natural daylight. They also improved the efficiency of existing systems, retrofitting (rather than replacing) the chiller plant and replacing old air handling equipment with fewer and more efficient units.

The third component entails smartly controlling energy use. New York City’s tallest building is now home to America’s largest wireless control system. Carbon dioxide sensors throughout the building determine exactly how much outside air needs to be brought into the building at a given time, cutting down on unnecessary circulation, and occupancy sensors allow the building to better allocate air and manage lighting. And the Empire State’s wireless thermostat sensors, unlike the hard-wired variety, can be moved around an office space to ensure they are placed where the temperature is average (rather than, say, tucked behind the copier or coffee machine where they record a falsely warm ambient temperature).

The same occupancy sensors that manage air allocation and lighting also tell the building’s management which offices are leaving the lights or the coffee maker on when no one is around. Offices are individually metered – and billed – and metering information is archived and provided to tenants online so they can see when and how they are using the most energy. That kind of meaningful information helps tenants manage thier behaviors to trim their own energy use – and expense. The Empire State Building’s management is a partner in the entire process, helping each tenant figure out how it can reduce its load on the building.

“Tenants are drawn to us because tenants’ largest three expenses are salary, rent, and utilities,” Malkin says. “The ability to control expense is extremely important. The work that we are doing is not just from the perspective of our own building systems, but we’ve created a suite of services to help tenants achieve things that give them tremendous payback for their own spaces, their own investments.”

As for Malkin’s investment, he’s paying out $13.4 million incrementally for the retrofit, an investment that should save him $4.4 million per year. That means his capital investment in green tech will pay for itself in just three years, two years ahead of schedule. And by creating a competitive advantage for tenants, the building creates a monetary incentive for tenants to be conscious of their own energy consumption. Which, as Malkin is quick to point out, is how you really initiate change.

Correction: The original published version of this story stated that each rehabbed window is roughly $1,600 less-expensive than a brand new window. The savings are closer to $1,800 per window, and the numbers in the story have been adjusted for accuracy. 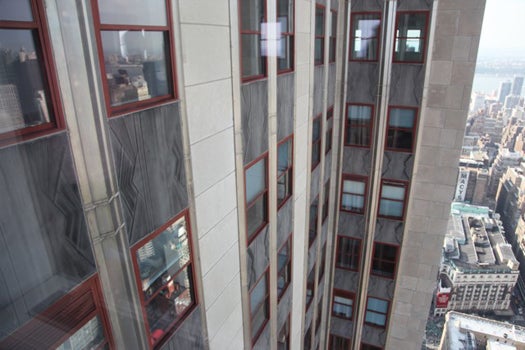 In all, the Empire State Building contains more than 6,500 windows, almost all of which have a radiator unit installed directly underneath. Most of the double-pane glass was well more than a decade old, and all that carved exterior “stonework” beneath each window is actually aluminum installed to reduce the cost of expensive masonry when the building was constructed in 1931. That’s right: the radiator units are separated from wintry outdoor conditions by conductive aluminum. 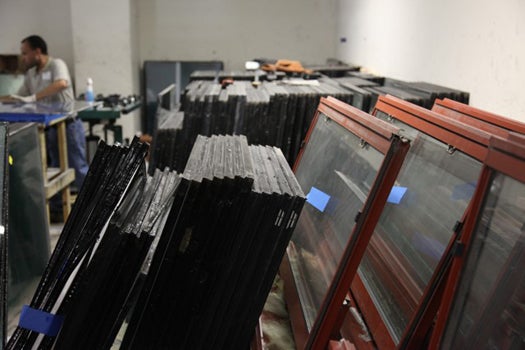 Every night, 100 windows are pulled from their frames somewhere in the Empire State Building and brought to a rehab shop on the fifth floor. They are replaced by the 100 windows pulled down the night before and rehabbed earlier that day. Each window is completely stripped from its framing, producing two panes of dirty, aging glass. 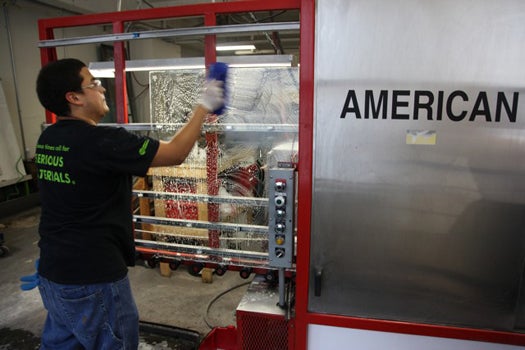 Don’t call it greenwashing. Each pane goes through a rigorous three-step cleaning process, including a trip through a car-wash-like machine that restores it to a like-new state. Some of the glass has accumulated defects and must be discarded – much of it is between 15 and 17 years old – but overall the Empire State Building is recovering roughly 90 percent of its old glass. 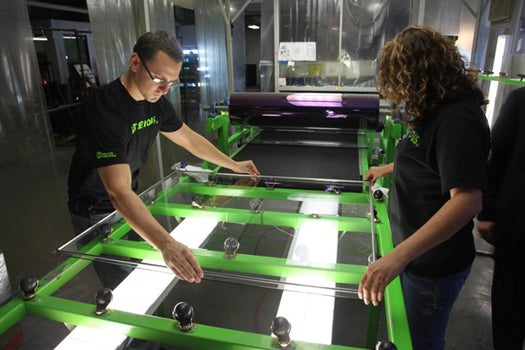 Each two-pane set is fitted with a spacer that creates ample space between them. After they are sealed up, krypton and argon gasses are pumped into the space in between. The heavy molecules don’t create the same kind of heat exchange between panes that regular ambient air would, drastically improving each window’s insulation value. 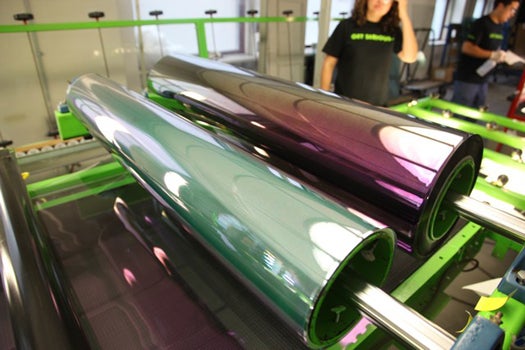 Each window also gets coated with a thin Mylar film that and is then baked in an oven that stretches the UV-retarding material tightly against the glass, removing any visible imperfections. The film goes on with a purple hue but after the heat treatment appears clear. 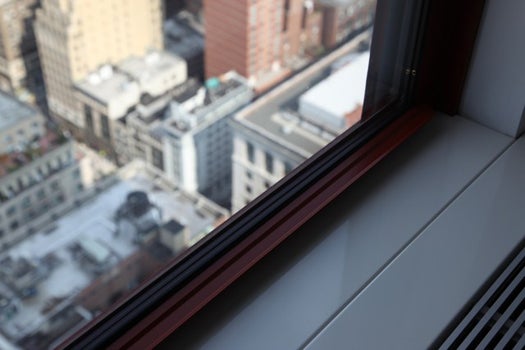 Smart Rooms With a View

After a one-day turnaround, the rehabbed windows are installed in the place of the next batch of old glass due for a 21st-century update. For their part, the radiators underneath are getting a new layer of insulation as well. The end result: windows that keep heat out in summer and heat in during the cold months, and radiators that pump heat to the building’s interior without bleeding so much of it into the outside air. These technologies reduce the load on the building’s current infrastructure, which is also receiving efficiency upgrades. The result is an investment in green tech that will reduce the energy consumption of the Empire State Building by nearly 40 percent and pay for itself in just three years.
Energy
Videos