A researcher in New York is building fish robots that infiltrate schools of fish and take them over. The cyberfish... 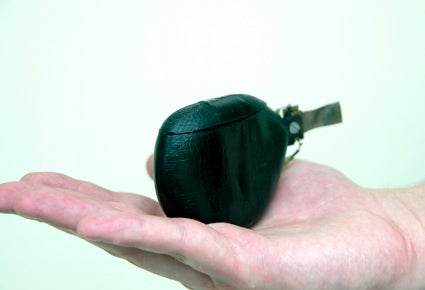 A researcher in New York is building fish robots that infiltrate schools of fish and take them over. The cyberfish could be used to lead fish away from unsafe underwater turbines or other hazards. The same mathematical models that drive them could conceivably be used to lure birds to new wintering grounds or even to herd mammals, the researchers say.

Maurizio Porfiri, an assistant professor at the Polytechnic Institute of New York University, studied the fluid dynamics of leader fish to build a realistic fishbot. The university says the technology could even be expanded to tap energy from the movement of water to charge its batteries.

Scientists know plenty about the flocking and schooling behavior of fish and birds, but the way in which certain individuals become leaders is less understood. Porfiri had to research “leader fish” dynamics to understand how their behavior affects an entire school.

He used a tank of common bait fish, which swim in huge balls in the ocean. They decide whether to school based on what they see and the flow they feel, making them easy targets for predator fish and mammals but also solid subjects for fluid-dynamics studies.

Porfiri and colleagues found that leaders beat their tails faster, accelerate to get other fishes’ attention, and then gather a school. The team built mathematical models to explain the phenomenon, and the results are reported in the _ Journal of the Royal Society Interface._

Meanwhile, the researchers built a fishbot out of ionic polymers, which contract like artificial muscles when voltage is applied to them. The fishbot thus swims realistically enough for real fish to accept it as their leader.

Though the ionic polymers are stimulated by batteries, Porfiri would prefer to use electromagnetic waves transferred through water. His work on the fishbot’s ionic polymers has led him to study underwater microsensors that could harvest energy from eddies and small vibrations, NYU-Poly says.

So far, the fishbot can only swim along a single plane; the next step is to create robots that can dive and surface, NYU-Poly says. Porfiri’s team is still studying the effect of numerosity — perception of numbers — on schooling behavior. Fish intuitively count about three or four objects around them, as opposed to about 10 for humans.

The researchers hope the mathematical models they’ve created can help robots take birds to new wintering grounds if their forests are damaged, or even to herd humans to safety in chaotic situations like fires. For now, the fishbots could lure fish away from turbines.

Which raises an interesting point — if hydroelectric turbines didn’t exist, we wouldn’t need to invent robot fish to protect the real ones.