A group of Swedish researchers are looking beyond plants for living models upon which to base their solar harvesting tech,... 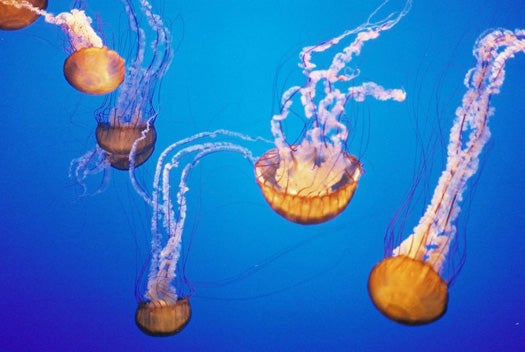 A group of Swedish researchers are looking beyond plants for living models upon which to base their solar harvesting tech, turning instead to the photovoltaic prowess of the jellyfish. Tapping a protein in the jellyfish Aequorea victoria known as green fluorescent protein (GFP), the team has assembled a device that converts ultraviolet light into free electrons using a drop of green goo.

The team assembled its cell from two simple aluminum electrodes separated by a small gap atop a silicon dioxide substrate. The GFP is placed between the two electrodes where it assembles itself into strands connecting the electrodes. When introduced to UV light, the GFP gobbles up photons, producing electrons that enter the circuit as electricity.

Why GFP? For one, it’s inexpensive. It doesn’t require expensive additives or costly processing, but can go directly onto the substrate where it starts cranking out juice. Further, it can be integrated into a self-contained fuel cell that requires no outside light source. Photons would instead be generated within the fuel cell by enzymes like the ones found in natural light-producers, like fireflies or sea pansies. Such a power source could be miniaturized to power tiny nano-devices.

Not to mention, jellyfish are in great supply. Populations are booming in some areas, leading inexplicably to massive jellyfish swarms (the Gulf oil disaster could lead to a spike in jellyfish numbers in those waters). If researchers can harvest something good from all that extra GFP in the water, more power to them.