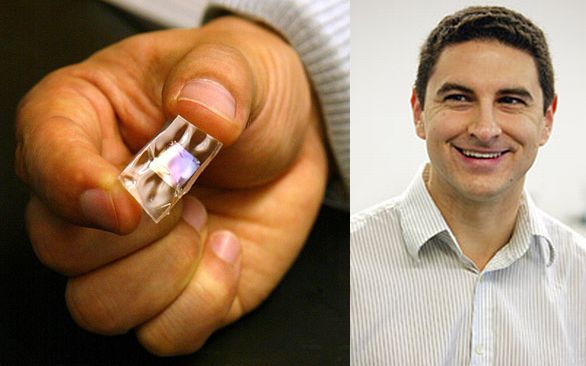 Natural body movements such as breathing and walking could soon power pacemakers and maybe even give some extra juice to your future iPad purchase. Princeton University engineers have turned silicone rubber sheets into piezoelectric materials that create electricity when flexed, which opens up a whole range of possible applications worn outside the body or implanted in strategic locations. The Register also highlights a researcher statement about how silicone has already proven “biocompatible” through usage in cosmetic implants.

This latest research represents the first successful combination of silicone and nanoribbons made of lead zirconate titanate (PZT). The latter has piezoelectric characteristics that allow it to generate electrical voltage when squeezed or pressured, and can convert 80 percent of mechanical energy into electrical energy — the most efficient piezoelectric material of the moment.

“PZT is 100 times more efficient than quartz, another piezoelectric material,” said Michael McAlpine, a mechanical and aerospace engineer at Princeton, who led the project. “You don’t generate that much power from walking or breathing, so you want to harness it as efficiently as possible.”

McAlpine and his colleagues suggested applications such as shoes that help power mp3 players or smart phones. There’s even the thought of placing silicone sheets against the lungs to harness natural breathing motions to power pacemakers, as opposed to using batteries that require surgical replacement when they run down.

The Princeton work received funding from the U.S. Intelligence Community, a cooperative of federal intelligence and national security agencies. So it’s a safe bet that for the moment, spooks may benefit from this work more than top-heavy celebrities. But anyone hankering to get their power walk on now can consult one of Popsci’s own DIY gurus.