Militaries have a tough, often messy job to do, and as such taking steps to polish their green credentials generally... 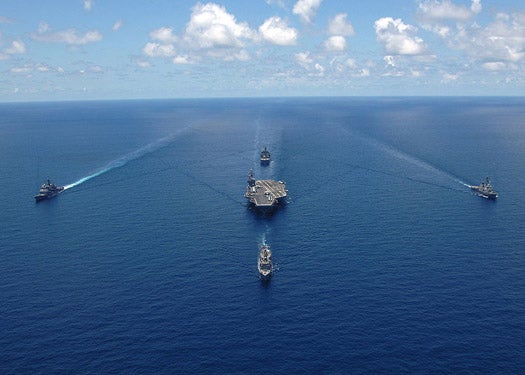 Militaries have a tough, often messy job to do, and as such taking steps to polish their green credentials generally isn’t a high priority. But the potential cost savings – not to mention the tactical advantages – of going green are not lost on U.S. Armed Forces’ top brass. The Army has pursued “zero footprint” base camps, and the Air Force is looking into a variety of alternative propellants that could be turned into jet fuel. Now the Navy is going green, signing a memorandum of understanding with the USDA to demo a Green Strike Group of biofuel- and nuclear-powered vessels by 2012.

On its face, the Navy’s plan is fairly ambitious. Though there are already plenty of nuclear-powered submarines and other naval vessels in the fleet, the Navy also possesses a pretty big carbon footprint; it has some 50,000 non-tactical vehicles burning petroleum, and naval bases aren’t exactly models of efficiency and prudent power usage. Over the next decade, that’s going to change.

The Navy will demo the green-powered tactical group, known as the Green Strike Group, by 2012, and will officially take to the seas for regular operations with a Great Green Fleet by 2016. That’s not just green ships; Naval airplanes and any surface combat equipment will run on biofuels as well.

By 2015, that 50,000 strong fleet of non-tactical vehicles will cut its petroleum use by half, phasing in flex-fuel and hybrid vehicles in the place of petro-burners. By 2020, at least half of shore-based installations’ power will be derived from alternative sources, and half of all installations will be net zero consumers of energy.

It’s not all for show either: by 2020, the Department of the Navy also plans to halve the fossil fuel consumption entirely, across the entire force. That means ships, aircraft, tanks, shore vehicles and naval bases will all be switching to a half alternative fuel diet by the time the next decade dawns.

For an entity with as much entrenched culture and institutional hard-headedness as the Navy, it’s a pretty ambitious timeline. It’s not fair to say this is all because the Navy gives a hoot; fuel convoys have become popular targets for insurgents in Iraq and Afghanistan, and the Navy has to keep the supply lines open for the troops on the ground, putting sailors, soldiers and marines in harms way. But be it tactical shrewdness or good environmental stewardship, it’s good to see the largest consumers of energy in the U.S. federal government greening up their acts.