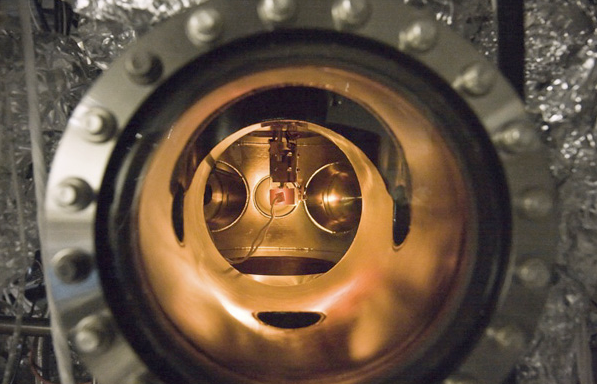 A small PETE device made with cesium-coated gallium nitride glows while being tested inside an ultra-high vacuum chamber. The tests proved that the process simultaneously converted light and heat energy into electrical current. Stanford University
SHARE

Though the sun offers us a couple options for exploiting its energy — light and heat — we’ve always had to choose to use one at a time, because solar-energy technology hasn’t been able to capture both typs of radiation simultaneously. Stanford researchers say that’s about to change, however. Their new breakthrough could put solar power on par with oil, price-wise.

Using readily available materials, a team of engineers has come up with the first solar technology to combine photovoltaic and thermal electricity generation.

Photovoltaic (PV) cells get less efficient as they get hot, which is one of the biggest problems in solar efficiency. What’s worse, silicon — used in most PV cells — can only absorb energy from certain parts of the light spectrum. Ultimately, more than half the solar energy hitting each cell is wasted.

The Stanford system exploits the excess heat, turning it into extra electricity.

Researchers led by Nick Melosh, an associate professor of materials science and engineering, coated a piece of semiconducting material with a thin layer of cesium. This allowed the cell to use both light and heat to generate electricity, Melosh says.

The team used gallium nitride in the tests because it can withstand high temperatures, but PETE systems of the future would likely include gallium arsenide, commonly used in household electronics.

The system has to get extremely hot in order to work — the hotter the better, Melosh says — so new PETE systems will be a better fit for huge solar farms than rooftop arrays. They will need to include solar concentrators, but that creates another layer of efficiency, because less semiconducting material will be needed. Melosh says each device would require about a six-inch wafer of semiconducting material.

This video from Stanford further explains the process.