Scientists have long been stymied by human regenerative healing — that is, wholesale regrowth of, say, a severed limb —... 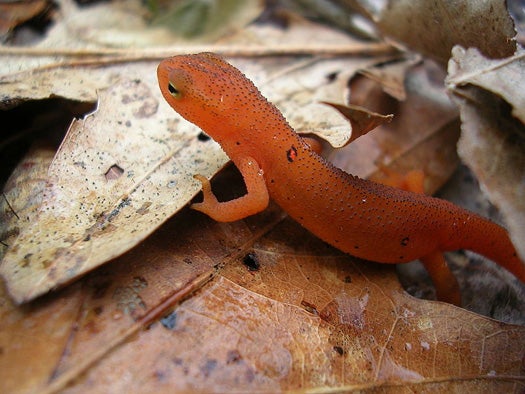 By shutting off a single gene, researchers think humans could regenerate damaged tissue just as newts do. J. Carmichael
SHARE

Scientists have long been stymied by human regenerative healing — that is, wholesale regrowth of, say, a severed limb — an ability inherent in some species but lost on humans. But new research suggests the ability to regenerate isn’t based on something newts and flatworms have that we don’t; rather, it’s something we do have that’s keeping us from regenerating tissues. Researchers think a gene called p21 may control regenerative healing, and that by switching it off, humans could perform our own regeneration.

The new research suggests that the potential to heal without scarring — or possibly even to regrow a limb, albeit in a limited manner — may lie dormant in human cells, kept in check by the p21 gene. A group of lab mice engineered to lack p21 were able to regenerate surgically removed tissue to the point that no evidence of the surgery remained. Holes punched in their ears — a standard procedure for tagging lab animals — also healed perfectly, leaving behind no traces of scar tissue or previous damage.

Essentially, switching off the p21 gene allows adult cells to behave like pluripotent stem cells, reorienting themselves into whatever kind of tissue they need to be. But naturally there is a give-and-take; p21 is closely intertwined with another gene, p53, a cell-division regulator that, if allowed to run amok, can lead to many types of cancers. The p21 gene acts as a safety valve for p53, stopping cell division in the case of DNA damage. So switching off p21 can allow cells to engage in regenerative healing, but the risks of doing so include rampant cell division (read: cancer).

However, in the p21-free lab mice there was no cancer surge as one might expect, but rather an increase in apoptosis, or cell suicide, which directs damaged cells to destroy themselves. So it would appear that by striking some kind of controlled balance between allowing regenerative cells to work, while letting apoptosis regulate out-of-control cell division, could lead to regenerative treatments for humans somewhere down the road.