Unlike antibiotics, which kill many different types of bacteria, antiviral drugs for the most part need to target individual, specific... 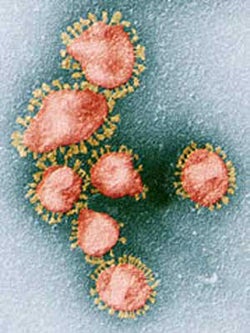 Unlike antibiotics, which kill many different types of bacteria, antiviral drugs for the most part need to target individual, specific viruses. A drug that attacks a multitude of viruses — an antibiotic for viruses, effectively — would be a significant boon for medicine. And a group of researchers led by UCLA scientists just may have discovered exactly that.

Writing in Proceedings of the National Academy of Sciences, the researchers describe an early proof-of-concept study on a chemical they call LJ001. The chemical attacks the structure of viruses themselves, and may potentially cure a wide swath of disease ranging from influenza to AIDS to Ebola.

For all the complexity of the diseases they cause, viruses are very simple; just a bunch of DNA in a lipid sack. LJ001 attacks that lipid sack, as well as the lipid membrane of healthy cells. But whereas the healthy cells can easily repair the damage, the inert viruses simply fall apart.

Previous attempts at creating wide-spectrum anti-viral drugs have largely failed. Some are in use, but they are very expensive, and because they work by attacking RNA and DNA replication, they often carry significant side effects. By attacking the structure of the viruses, not the replication, LJ001 may end up as the first drug in a new age of medicine.