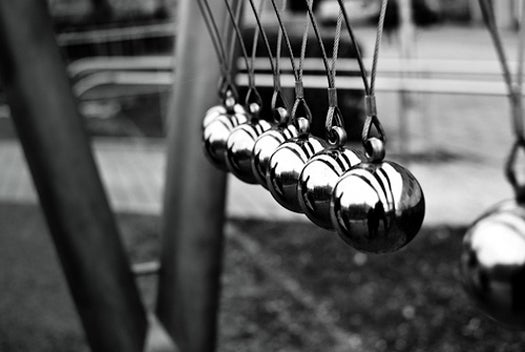 Inspiration comes from the strangest places. A falling apple supposedly inspired Newton’s laws, and now a desktop ornament bearing Newton’s name has inspired a new acoustic weapon that both militaries and hospitals can keep in their arsenals: sub-sinking, tumor killing “sound bullets.”

Researchers at Cal Tech, using a modified renditions of Newton’s cradle – those stainless steel balls suspended by wire that make a seemingly endless clatter once set in motion – have figure out a means of concentrating and amplifying sound waves in a way that makes them an extremely destructive acoustic force.

The team essentially used a metamaterial to create an acoustic lens. They lined up 21 parallel rows of ball bearings on the acoustic lens, each containing 21 bearings with weights attached to the end to vary the pressure in each row. The team then dropped another small ball onto one end of a row, causing a compression wave to travel down the row.

But unlike Newton’s cradle, the system doesn’t let the last ball carry the compression wave outward; rather, the energy is passed into the metamaterial, which tightly focuses the waves to a spot a few inches away from the acoustic lens. The researchers were able to focus all of the sound into a very small area, and in doing so they amplified the waves more than 100 times beyond what previous metamaterials have achieved. The researchers say those numbers could easily be increased.

Unlike conventional lead bullets, sound bullets can travel through air, liquid and solids alike, carrying devastating energy along as they go. If weaponized, a sound bullet system could create waves to blast holes in submarines or reach into underground bunkers with devastating shock waves.

But on a rosier note, the tech could be employed for engineering and medical purposes, allowing structural engineers to see weak supports inside a structure or a doctor to image the body without resorting to high doses of radiation. Sound bullets could even be potentially used to destroy tumors by concentrating heat on malignant tissue below the skin. The team will now try to scale the sound bullet system up to 3D to increase the accuracy and effectiveness of their targeting; if successful, the range of applications for this tech could be extremely vast.