Glowing Prairie Rodents Teach Us the Genetics Of Monogamy

Man, those scientists just love their glowing lab subjects. First came mice, and then recently the first primates got some... 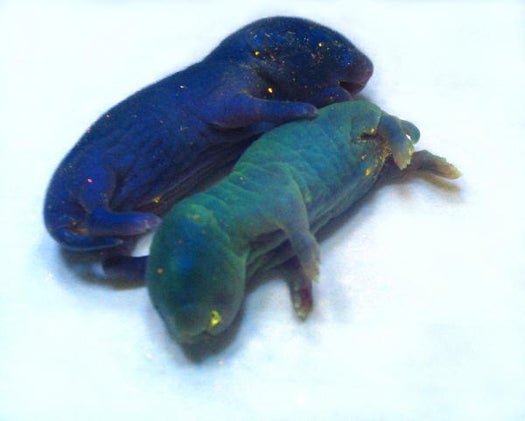 Man, those scientists just love their glowing lab subjects. First came mice, and then recently the first primates got some jellyfish genes implanted into their DNA. Now, scientists at Emory University have implanted the gene for jellyfish fluorescent protein in prairie voles.

But why prairie voles? They’re not a model system like a mouse or zebrafish, and they don’t cure any diseases like naked mole rats. So why them? Because voles rarely step out on their mates. In fact, voles show a lot of human-like social behaviors such as mating for life, shared child raising for couples, and even cuddling. But, like humans, some voles do have a wandering eye.

The scientists are studying the genetic of monogamy, and voles serve as a model of human behaviors like cheating or mate competition. In this experiment, they’ve linked the glowing gene to a gene suspected to control their impulse to cheat on their mate. If you glow, you’re not going to stray. But if you can’t be seen in the dark, then the Ms. Vole might have reason to worry.

Implanting the glowing gene only forms the first step in the genetic study of cheating, and even if they locate the appropriate gene, figuring out how and why it regulates complex social behavior is a different matter entirely.

Or, alternatively, they could just hire a private investigator to follow the vole around. Nah, what am I saying. I’m sure he’s just working late.