The wetted silk can apply a thin silicon layer directly to the brain's contours, shrink-wrap style, and monitor brain activity 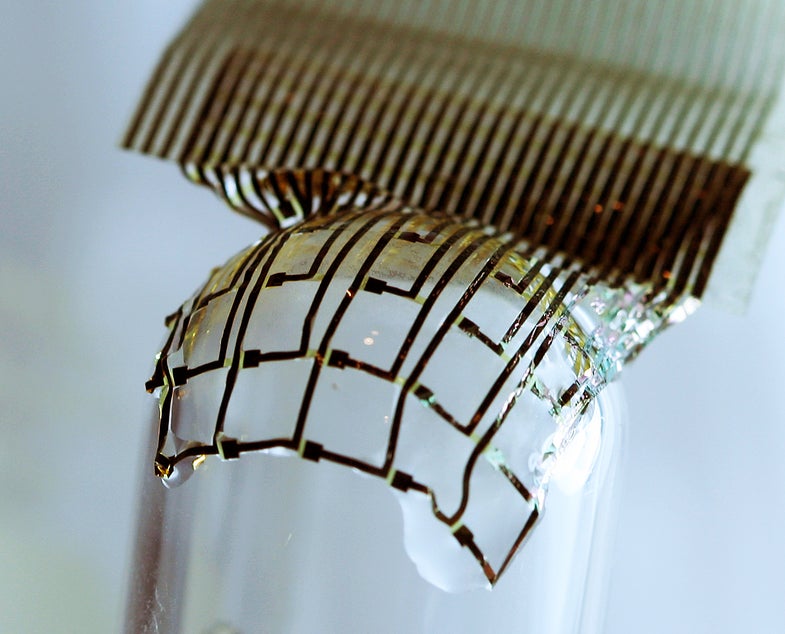 Implanting clunky electrodes or other devices inside people’s heads could someday give way to smoother, silkier neuromedicine. Scientists say that they have successfully measured the electrical activity of cat brains by using a silk-silicon surface mesh, according to Technology Review.

Silk films can easily be rolled up and slipped through a small hole made in the skull. When wetted with saline, the film helps the silicon circuits conform directly to the brain’s surface and even slip inside crevices.

There are also no biocompatibility issues, because the silk eventually dissolves over time and leaves behind a network of silicon circuits too thin to cause any harm. The group of researchers from institutions such as the University of Pennsylvania and the University of Illinois at Champaign-Urbana had previously shown how their silk-silicon stamp could avoid triggering an immune reaction.

Scientists hope that they can someday shrink-wrap the entire brain with a silky mesh and monitor brain activity for years on end. But first they must figure out how to add silicon transistors which can help amplify signals and actively respond to brain activity by applying electrical stimuli, or perhaps even releasing drugs.

Integrating the transistors may prove tricky because of the silk mesh structure, rather than just a silk sheet. But the same group has already shown how to wrap a flexible sensor array of nanomembrane transistors around the beating hearts of pigs. We’d place good money on seeing this happen a lot sooner than recreating a virtual feline mind, in any case.