It’s reminiscent of Cartman’s runaway Trapper Keeper notebook in that long-ago episode of South Park, but researchers at the University... 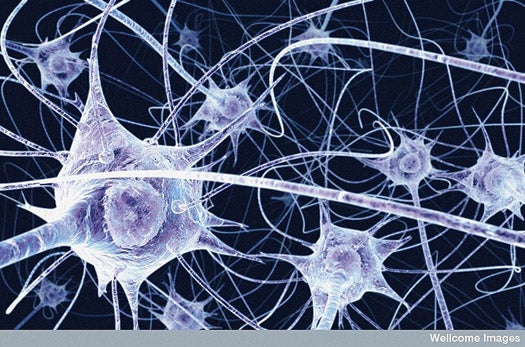 It’s reminiscent of Cartman’s runaway Trapper Keeper notebook in that long-ago episode of South Park, but researchers at the University of Wisconsin-Madison may be scratching the surface of a new kind of brain/machine interface by creating computer chips that are wired together with living nerve cells.

A team there has found that mouse nerve cells will connect with each other across a network of tiny tubes threaded through a semiconductor material. It’s not exactly clear at this point how the nerve cells are functioning, but what is clear is that the cells seem to have an affinity for the tiny tubes, and that alone has some interesting implications.

To create the nerve-chip hybrid, the researchers created tubes of layered silicon and germanium that are large enough for the nerve cells’ tendrils to navigate but too small for the actual body of the cell to pass through. They then introduced nerve cells to the tubes and found that the cells will readily thread their tendrils through them–even through complex geometries like helical curves–to connect with each other physically.

What isn’t clear is whether or not the cells are actually communicating with each other they way they would naturally. Going forward, the team aims to get sensors into the chips to see exactly how they are interacting. But the fact that nerve cells will follow the tubes along a preset path designed by researchers belies thrilling prospects.

For instance, nerve-electronic hybrid chips would make great places to test neurological drugs or to study the way nerve cells afflicted with disorders like Parkinson’s communicate. But even more tantalizing is the idea of a nerve-computer interface that would enable the kind of Skywalker-esque control of artificial limbs that is the holy grail prosthetics research.