A new generation of retinal implants could use light to provide power and data, potentially restoring vision in a less-invasive... 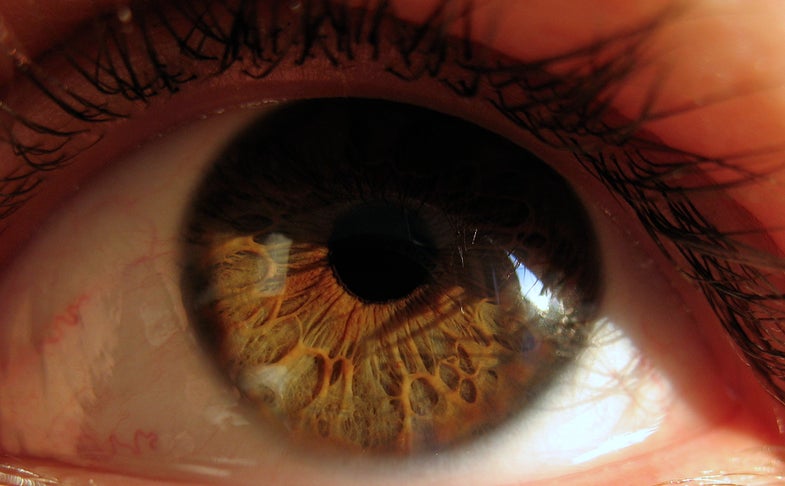 A new generation of retinal implants could use light to provide power and data, potentially restoring vision in a less-invasive form than existing implants. Researchers at Stanford University previously described how such a system would work, and now they’ve designed implants that can receive infrared signals for power and information processing.

Many vision diseases damage the light receptors but not neural processors, located deep within the eye. Implants work by stimulating those healthy receptors and sending electrical signals to the brain. They can be very effective, but they’re also bulky and complex, requiring inductive coils and cables to provide power. Instead, this method uses pulses of infrared light to stimulate implanted silicon diodes.

The patient would have to wear glasses because the infrared pulse is transmitted through a pair of goggles, at least in the current configuration. But lab tests show that a very weak signal, illuminating just one pixel, is enough to elicit a neural response — this means future versions could be fully integrated infrared laser implants.

James Loudin and colleagues worked with lab rats, fitting each pixel in a retinal prosthetic with independently functioning silicon photodiodes. A video camera captures the scene, and a small computer processes the images, which are then projected into the eye in near-infrared. The photodiodes convert this light into electrical pulses, which are transmitted to the retina — like a healthy eye would work.

Ambient light is about 1,000 times too weak to stimulate the neurons, so the researchers used an infrared laser. But this introduces its own set of challenges, especially heating of the retina and surrounding tissue. Loudin and colleagues tested various pulse durations and wavelengths and were able to achieve effective neural stimulation at very low levels, they write. The rat prototype worked well below safety limits for human ocular exposure, they say, so this could conceivably work in people.

The setup also preserves the connection between eye movement and perception, using flexible silicon that can conform to the eye’s natural curvature. Silicon therefore enables larger pixel arrays, too, meaning more information streaming into the retina.