Electronic ‘Smart Fingertips’ Could Give Robots and Doctors Virtual Touch

The same touchy engineers who gave us the first peelable epidermal electronics last year have a new virtual tactile system:... 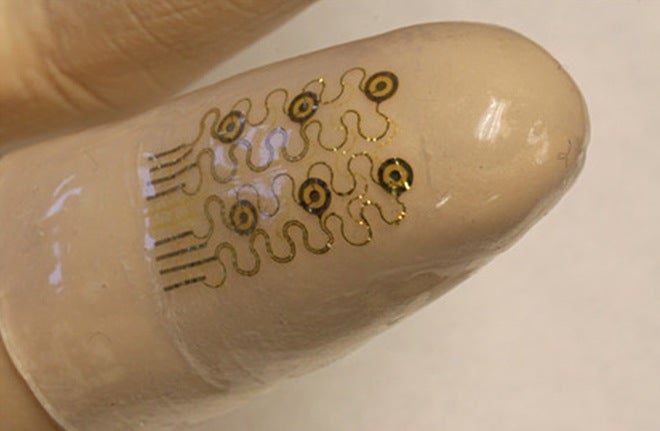 The same touchy engineers who gave us the first peelable epidermal electronics last year have a new virtual tactile system: Smart fingers, which could someday bring a real sense of touch to telepresence applications. Surgical robots or human doctors could virtually feel surfaces, temperatures and other characteristics, through special smart gloves designed to trick the brain into thinking it’s feeling.

Materials scientist John Rogers and colleagues at the University of Illinois at Urbana-Champaign designed flexible, skin-molded fingertip sensors made of super-thin silicon sheets. The gold conductive lines form a circuit, and the entire sensor is embedded in a flexible polymer material called polyimide. This is transferred to a thin silicone mould, which can be fitted to a fingertip shape. The sensor provides tactile feedback by forming electric currents when you press something. The currents are transmitted to your actual skin.

In tests, Rogers and colleagues donned the electronic fingertips and started touching flat objects. The resulting currents translated to a slight tingling sensation in their flesh-based fingertips. This is a step toward creating electrical signals that could be interpreted by the nervous system, according to ScienceNOW — eventually, electronic fingers could create patterns of signals that can recreate sensations, from heat to texture.

The fingertips could also include separate sensors to detect things like motion or vibration. Rogers says in a news release that they could be used as medical devices — perhaps for ultrasound imaging, or even as an ablation device, burning away problem tissue or creating sutures. “Imagine the ability to sense the electrical properties of tissue, and then locally remove that tissue, precisely by local ablation, all via the fingertips using smart surgical gloves,” he said.

The main breakthrough here is the fingertips’ stretchability and flexibility. Plenty of haptic feedback devices exist, but they’re largely bulky, or flat, or otherwise unable to morph very well to the soft geometries of the body. This system is very similar to the first peelable, temporary tattoo-like skin electronics Rogers and colleagues developed last year. In that system, morphable electrodes are pasted onto the skin with water, hence the comparison to temporary tattoos. They could be used as health monitoring devices or machine-human interfaces, among other uses.

These fingertip sensors could conceivably be designed to fit any body part in need of some tactile feedback, Rogers and colleagues say — like perhaps the heart, where it could sense muscle contraction or get things pumping properly. The research appears in the journal Nanotechnology.