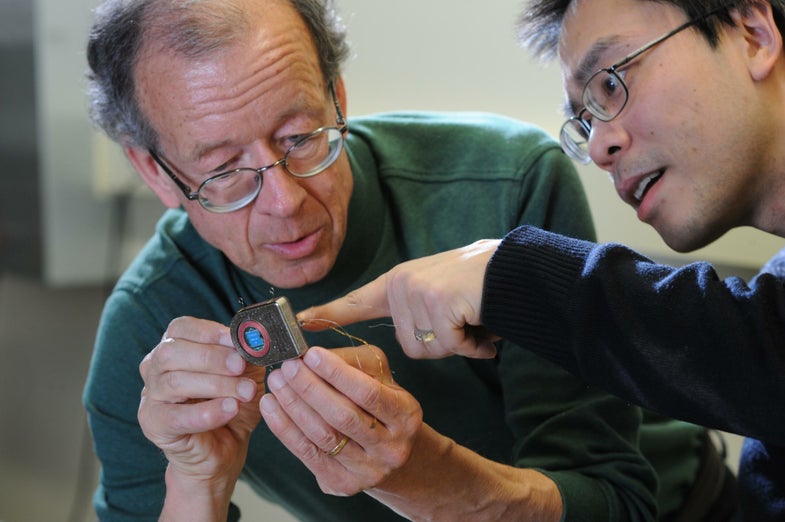 Brain-computer interfaces that can translate thoughts into actions will change how stroke patients, paraplegics and other people with limited mobility interact with their surroundings. But so far, these devices have involved bulky corded equipment inside research labs, requiring patients to be tethered to a computer. Now researchers at Brown University have built the first wireless version. Like a cellphone embedded in the brain, their new implantable brain sensor can relay broadband signals in real time from up to 100 neurons.

The 2.2-inch devices have been implanted in the heads of three pigs and three rhesus monkeys for about 16 months now, and are providing rich detail on the inner workings of the animals’ brains. The electronics are far more complex than those in a cell phone, yet they use a minuscule amount of power, said Arto Nurmikko, professor of engineering at Brown who oversaw the device’s invention.

“Listening to brain signals and transmitting them requires a very specific type of electronic circuitry. It’s very different from what you and I are using right now talking to each other,” he told me (over the phone). “We have to be ready to capture all sorts of points of finesse in that neural code, and that requires really tailor-made microelectronics.”

So far, the devices captured neural activity while the animals performed several activities, such as turning their heads or touching an apple. It enables the animals to move around freely, which allows researchers to capture plenty of neurological data in real time. 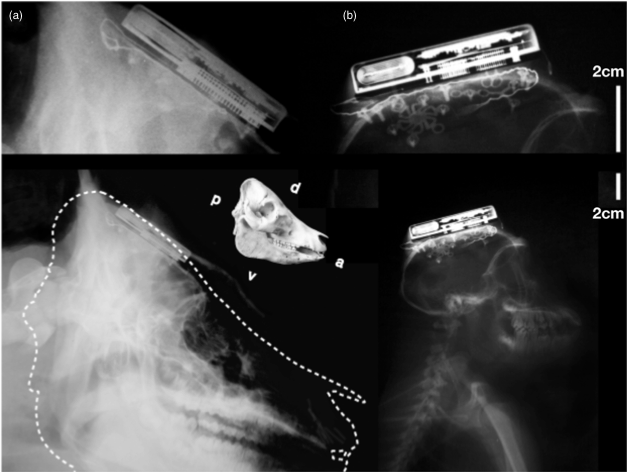 The heart of the system is a pill-sized electrode chip implanted on the cortex. Signals from a cluster of neurons are sent to a titanium box containing a processor, lithium-ion battery, and wireless radio and infrared transmitters. The device is recharged through wireless induction, and consumes fewer than 100 milliwatts of power, which Nurmikko described as a key breakthrough. It takes a couple hours to charge, during which time the pigs’ and monkeys’ skin got pretty warm, so the team poured cold saline over their heads to keep them comfortable.

The device transmits data at 24 Mbps using microwave frequencies at 3.2 and 3.8 Ghz. The entire thing is hermetically sealed and body-proof, and much more complex than the pacemaker, the first electrical device installed in humans.

“The device sits in a relatively corrosive environment, which is what our body and brain liquids are–seawater-like,” Nurmikko said. “It has to be stable, measured in what could be ultimately decades of human use.”

And that is the end goal, according to the team. This device isn’t approved for use in human clinical trials, but it was designed with that in mind. Nurmikko and fellow researchers are working with the BrainGate research team, a consortium of several neurologists and neurosurgeons working on implantable neural interfaces. The monkey and swine research will go a long way toward approving future human research, Nurmikko said.

“For us on the scientific level, this is certainly an important milestone, but in the same breath, I must say these types of milestones will take a considerable amount of extra effort to translate them into human use,” Nurmikko said. “Whether it will happen or not will depend on many things–perhaps less so on the technology, which we feel now is quite demonstrably safe.”

A paper describing the new device is published in the Journal of Neural Engineering.